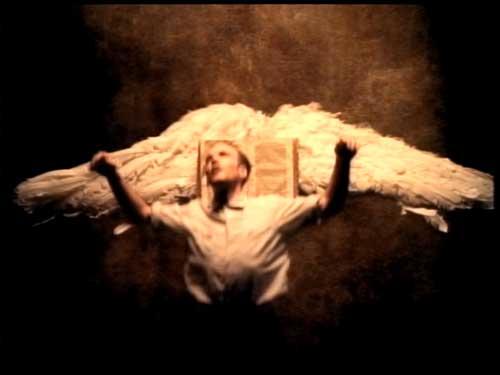 Gabriel Garcia Marquez, best known for his novels One Hundred Years of Solitude andLove in the Time of Cholera, has a bizarre short story called “A Very Old Man with Enormous Wings.”  It’s about an aging angel who literally fell from the sky.  A couple found him struggling to get out of the mud.  A neighbor pointed to the man’s enormous wings and told the couple that it had come to take their sick child away.  Frightened, the couple locked the angel up in a chicken coop, but naturally, word quickly spread, and the entire village came to see the angel.  The couple started charging an entrance fee and got very rich in the process.

R.E.M.’s music video for their song “Losing My Religion” alludes to that story.  Like Madonna’s “Like A Prayer,” the song is just a love song that has nothing to do with religion (“Losing my religion” is a Southern expression that means “losing my temper or losing my cool”), but the music video takes the song to another level through the story it tells.  Lit like a series of Caravaggio paintings, the video is full of Christian and Hindu religious imagery–angels and St. Sebastian, for example–and depicts  the fictional angel’s fall from the sky.

The readings today reminded me of the short story and the music video. Today the Lord commands us to love our enemies.  And as though that’s not tough enough, he goes on:  “Pray for those who persecute you…  Do more than the pagans and the gentiles…  Be perfect as your Heavenly Father is perfect.”

Of course we’ve all heard this before, and the words have grown so dangerously familiar that they’ve virtually become cliches to most of us and may have, as a result, become impotent.  But if we really think about it, if we really take the Lord’s words seriously, we should wonder:  “Really?  Isn’t this too much to ask?”  In other words, aren’t these wings simply too enormous and too heavy for us?  Let’s face it:  If we’re not careful, most of us may end up considering the Lord’s commandment as no more than nice, poetic words best locked away in some chicken coop like Garcia Marquez’s aging angel and maybe put on some exhibit or freak show.

I remember one incident in my life when I found myself facing the invitation and the challenge to love my enemies.  Years ago, I was assigned to a new place, and was warned by a friend about “wolves in sheep’s clothing.” True enough, in my new work, I met some people’s resistance and received some pretty hurtful criticisms.  I tried as best as I could to understand these people and to reach out, but to no avail.  I remembered my friend’s warning, and really felt like I was surrounded by wolves.  It was a very frustrating and painful time in my life, and at the time I experienced how truly difficult it was to love one’s enemies.

During one prayer, however, I received a stunning insight:  I realized that the people I regarded as wolves were actually “sheep in wolves’ clothing.”  They might have turned into “wolves” only because of hurtful things that had happened to them in the past.  When I saw that, my anger began to melt away, and my hurt began to heal. By God’s grace, I actually began to feel compassion for my enemies.  I realized that the thing for me to do was not so much to fight them or even to fend them off, and certainly not to eliminate them. Rather, I was being invited to try my best to winthem, to coax the sheep out of their wolves’ clothing, so to speak.  My prayer at the time was for the Lord to help me love these people into sheep.  During those months, just to remind myself, my screen saver flashed a mysterious mantra:  “To love the wolves into sheep.”

The challenge for us today is to take the words of the Lord and unwrap what they might mean for us here and now.  What does it mean today for me to love my enemies?  Who are my enemies in the first place?

Here’s our Quick Question for the day:  “Is it possible to actually love our enemies?  What can help or not help?”  Think about it, and share a thought, a feeling, or a question.