Like many Filipinos these days, I am infected with Francis-mania, and I offer no apologies or explanation for it. Even if I am miles away from the Philippines, I exhibit all the symptoms of this collective infatuation with the Pope that’s sweeping the Philippines. I’ve been watching every possible online coverage of the papal visit, reading every homily, and scouring the Internet for every possible picture of the Holy Father.

This morning I watched Pope Francis’ Mass at Tacloban. Braving wind and rain, he stood before thousands of Yolanda survivors, significantly clad in a yellow plastic raincoat like the crowd that had gathered there to see and hear him. Pope Francis spoke to them about how learning about the catastrophe 14 months ago, he had wanted so much to be there with them and though late, finally made it. His words of consolation were simple–spoken in his native Spanish. They touched the heart. The thousands who watched and listened to this man in the rain–their eyes were wet, and not from the rain. 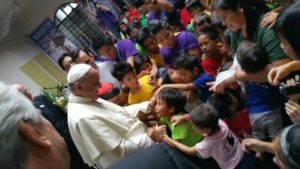 Teary-eyed myself, I couldn’t help but remember the words of our Lord today: “You will be called Peter.”

As Pope, Francis–the former Jorge Bergoglio, the Jesuit Cardinal of Argentina–is the successor of Peter, the head of the Catholic Church, although he has always preferred to refer to himself as the “Bishop of Rome.” Since his election, he has spoken and acted in exactly the same way as we imagine Peter would in the world today–like, in the Pope’s own words, “a shepherd who smells like his sheep.”

On his way to the stage for his meeting with families at the Mall of Asia, the Holy Father went out of his way to greet and bless some well-wishers. Among them was a young couple who had brought with them their three-year old son, who was suffering from pulmonary arterial hypertension. Like Pope Francis, the boy has only one lung, and the parents, beside themselves with anxiety about their son’s health and future, just wanted to see the Pope to get some inspiration. What they didn’t expect was how their shepherd saw their boy in that crowd of thousands, bestowed his blessing, and turned to the mother to say, “Do not cry.” Later the mother wrote: “Three words and everything just becomes a little bit easier to bear.

I may not be in the country for the papal visit, but as someone who has closely followed–and been constantly surprised–by this papacy from the beginning, I am grateful for this wonderful opportunity for our people to encounter the Holy Father. A few months ago, I had the chance to attend one of Pope Francis’ public audiences at St. Peter’s Square, and even if many of us in the crowd didn’t understand a word of his talk (which was in Italian), we were inspired beyond words and moved to tears. Clearly, there is something special about this successor of Peter, in whom a journalist has written, “the papacy was made man.”

His very ordinary and very human touch is what makes every encounter with him–even from a distance–so extraordinary and divine. So many of my friends in the Philippines have been trooping to the different events, waiting for hours under the sun or even in the rain just to catch a brief glimpse of Pope Francis, even from a distance. Every single one of them tells me that the mere sight of the Pope, his very presence even on TV, inevitably brings them to tears. They all swear that it’s a virtual religious experience, a unique inexplicable sense of God. In a talk I heard years ago, the eminent Jesuit theologian, Fr. Catalino Arevalo, said, “Many people wonder why we almost always cry when we get an experience of God. What could be the reason? I think it’s because God is infinite tenderness.”

If we cry at the sight of Pope Francis, if tears well up in our eyes because of his sheer presence, as so many did during his Mass at Tacloban and in every single appearance he made during this visit, it’s because through this humble shepherd of ours, we experience the infinite tenderness of God.

During his inaugural Mass as Pope in March 2013, as Pope Francis delivered his homily, Cardinal Christoph Schonborn of Vienna sat among the cardinals, helplessly reduced to tears. Leaning over to Cardinal Timothy Dolan of New York, he explained, “He speaks like Jesus!” To which Cardinal Dolan quipped, “I believe that’s his job description.”

The papal visit in the Philippines–now on its final day–has shown that this Pope has been fulfilling his job description in an exemplary way, speaking with authority and compassion, as Jesus did, and stopping in his tracks, as Jesus was accustomed to doing, to turn and be close to his people, come rain or come shine. May this Successor of Peter teach us that to speak and act like Jesus in the world–that’s actually every Christian’s job description.

14 replies on “YOU WILL BE CALLED PETER”

Dear Father J. I’m too is moved to tears again just reading this. Im in far away Manila and was just glued to the tv and i followed His Holiness words and I cry and cry and cry. He really touched my heart and has changed me to be a better perdon. Thank you for this article, you could not have said it more meaningful.

Pope Francis’ visit has made a great impact in our lives!

Fr. Johnny: You said all that was welling up in my heart. I shed tears because summing up our Christian life, we have truly failed Jesus! We have been callously living our comfortable lives, eating 3 meals a day, etc, enjoying the pleasures of abundance, while our less fortunate brothers and sisters walk barefoot, without shelter, and without food, helplessly living on the scraps of corruption and greed with people in power forgetting their existence. We too are guilty, not giving from the well of our hearts…to have malasakit, as the Pope shows us. We have to renew our lives, to walk with Jesus, so that one day, in the “Halls of justice of our God”, recalling the Beatitudes, we can face God on His judgement of each and everyone of us, that we truly have complied with our hearts and soul. There are only 3 languages Pope Francis had said to remind us..the language of the mind, the heart and of our hands. Together as they work in a “symphony” of sharing, we the Filipinos can make a big difference in our Country and to the World. Thank you again Pope Francis for walking and feeling with us, to remind us that Jesus walks with us in every aspect of our lives, in joys and in our sorrows….”do not cry” as the Pope had said it; so comforting to hear. His tender and caring hugs made us feel the love of God Himself! We can start today! Within our own circles…with the people who work directly with us…many have no homes themselves…their families live in squatter areas, their children can hardly all go to school…saying thank you and respecting them is like Pope Francis being the “shepherd that smells like his sheep.” Lastly, our Church must come up with daily prayers to be said at every Mass to collectively pray for good and honest leaders for the upcoming elections…as early as now! We make our own poverty by electing corrupt and greedy alligators into office. We are responsible , so we must create and make that quantum leap for the much needed change for God fearing leaders and a God fearing nation itself! May God bless us all!

you said it so well fr. johnny. like many of your friends here, we
stood up for hours just for a glimpse of our Pope Francis. then i was
glued to the television to hear his every work and see his every facial expression.
a group of us even stayed in LHS in the hope Pope Francis would visit
the elderly jesuits. we called ourselves, the papal stalkers – and
we do this so lovingly because he walks and talks like jesus.

Fr. Johnny, you describe it so well. Now we realize why we are so infatuated.
The in-dwelling and holiness are so palpable. It mesmerizes.

thank you so much for this sharing! How blessed we are indeed.

Thank you Father for summing up everything in my heart. I have not stopped crying whenever I see him. I think of how the people around Jesus felt whenever He spoke to them or just be with them or just cry with them. It must have been overwhelming. This must be how it is.

We are honored to have been visited by Pope Francis, a godly human.
But I want him to stay longer…

Thank you Fr. for putting Into beautiful words how We feel. Haven’t had a dry eye when watching news on The Holy Father these few days .

Thank you, Fr. J. I was moved to tears also watching and listening to him speak from his heart.

We’ve all been touched to the core, Fr. Johnny. So happy for my countrymen, as well.

thank you, Johnny! i feel the same way as you! you express it better!