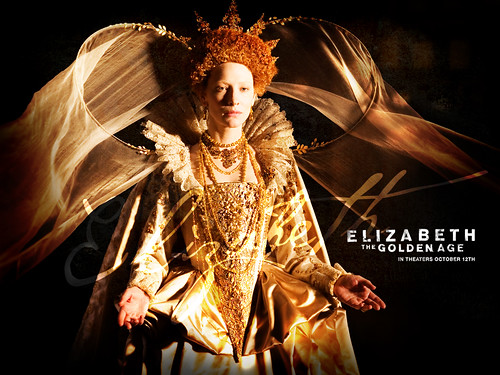 I recently saw “Elizabeth: The Golden Age” starring Cate Blanchett, a sequel to her 1998 film.  Although like the first, it struck me as a bit too anti-Catholic and anti-Jesuit, the movie nevertheless offered a moving portrait of Elizabeth I, who had to deal with the threat of Spain’s rising power as well as Catholic plots against her life.  Central to all these conflicts was her cousin, the Catholic Mary Stuart, whom many Catholics believed to be the rightful queen of England and whom Elizabeth had imprisoned and was forced to execute.

Years before, when she was still in Scotland, Mary Stuart had sent an ambassador to the English court to make the case for her as a potential heir to the throne. When she learned of this, Elizabeth responded by saying, “For as long as I live, there shall be no other queen in England but I.”

It’s not easy–this business of vacating thrones.  As we know, many wars have been waged over thrones.

In today’s Gospel, a similar war almost erupts among the Lord’s disciples. The mother of James and John goes up to the Lord and makes a request for thrones.   She asks that on the day of the Lord’s glory, her sons be allowed to sit on the right and on the left of Christ.  In other words, two little seats of honor and power, two little personal thrones, one for each of the brothers.

Actually, we can’t blame her, can we?  After all, her sons belong to our Lord’s closest circle of friends.  For some key moments in the life of our Lord–like the Transfiguration, the raising of Jairus’ daughter, and later, the Agony in the Garden–while the other disciples are asked to wait outside, James and John, along with Simon Peter, are the Lord’s chosen companions and witnesses.  And so, what’s wrong with getting something in return?  Why not ask for a slice of the pie–or in more familiar language today unfortunately, why not ask for a cut, a percentage, of the collection, as it were?

Of course the mother’s request for personal mini-thrones earn the two brothers the indignation of the ten disciples.  The other disciples are probably offended by their blatant and shameless self-interest.  But also maybe they are irritated and resentful simply because—guess what?—like you and me, they probably want their own little personal thrones as well.

Our Lord uses the occasion to teach them about leadership. Jesus tells them simply:  Give it up.  Give up the dream of the personal throne.  That’s the way of the world.  For the world, what counts in leadership is power, authority, and “lording it over others.”  That’s pretty much how leadership is defined by the world even today.

But Jesus gives us a different definition.  For him, leadership is defined not by thrones—not by power, not by authority, and certainly not by bullying others into obedience.  Rather, true leadership—true Christian leadership—is defined by service–and not just any kind of service, but humble service.  Our Lord puts it best:  It is to “be a slave of all.”  In other words, to be the last, the least, and the lowest.  Or, as he graphically demonstrates during the Last Supper, to wash the feet of others.  But to be able to do that, we need to vacate our thrones.

The problem is, it’s hard to give up something especially if we think we deserve it.  But you see, the moment we speak of “deserve,” we have already missed the point.  For our Lord, it’s not a question of deserving, but a question of serving.  The issue is not whether or not we deserve to keep our seats or our thrones.  Maybe we do as James and John probably did, too.  But the issue is whether we want to serve.  The problem with thrones is that they create a distance between us and others.  They keep us from others.  They keep us from serving them.  And so to serve, whether we deserve our present positions or not, we have to vacate our thrones—the way God, come to think of it, vacated his.

Our Lord practiced what he preached.  He gave up his throne to be one of us, to close the distance between us.  He even exchanged his throne for thorns.

And so my Quick Question for today:  “In my life right now, is God asking me to give up something, to vacate any particular throne?”  This throne may refer to anything that I have, and even something that I feel I deserve–but one that creates a distance between me and others, keeping me from serving them.

Think about it, and share a thought, a feeling, or a question.

Note;  I’ve uploaded the trailer of “Elizabeth:  The Golden Age.”