Today’s Gospel is about the one that got away.

We all have such a person in our life: Somebody we used to care for deeply, someone somehow entrusted once to our care, someone who inhabited our universe once upon a time and–for just that brief fairy tale moment–made all the difference . 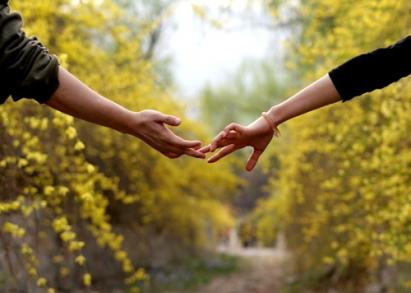 But as life would have it, life happened, and we lost that person–perhaps to death, but more likely to life: The childhood friend whose family migrated across the globe, the father who one day packed his bags and left, the brother who wandered into addiction and never found his way back, or the friend who betrayed you or even more painfully, the best friend or the spouse whom the years have simply and quietly turned into a stranger.

We each have people that got away. Today is a day to remember those persons.

You may be wondering, “Now, where did that come from?!” Isn’t today’s Gospel about the Parables of the Lost Sheep and the Lost Coin? These two parables of mercy–two of a series of three in Luke–don’t seem to have anything to do with estrangement or loss.

One way of describing these two parables is that they’re about God’s relentless mercy: a mercy as relentless as the foolish shepherd who’s willing to leave behind his flock of ninety nine sheep just to find that one lost sheep, or the woman who turns her house upside down and doesn’t give up until she finds her lost coin. God, the parable tells us, will happily do the same for every single one who’s lost and estranged from him. For such  is God’s mercy: It’s foolish and relentless. It refuses to give up, willing to go every extra mile even–and especially–for the one that got away.

We really should be grateful for this boundless, relentless mercy of God because we are its beneficiaries. But as in all things about God, we are also called to imitate His mercy and be its bearer in the world. Hence, these questions: How about our mercy? Do we try to be as merciful? Do we try to be as relentless about finding those whom we have lost or from whom, for whatever reason, we have been estranged?

Today we are called to think about those that got away, the people that we have given up on, by asking ourselves: Have I given up too soon, too permanently? Could God possibly want me to reach out to those that got away, reconnect with those that I’ve lost track of, resume the search-and-rescue operation on the lost and missing persons in my life?

Like God, let’s try not to give up too soon and too permanently on the one that got away.

Note: If you’re up to it, here’s a love song originally from Katy Perry but here performed by Boyce Avenue called “The One That Got Away.” 🙂

17 replies on “THE ONE THAT GOT AWAY”

Funny how “the one who got away” only ever referred to a person who might have been the ONE you marry. This puts a different meaning to the phrase altogether and becomes something we can now apply to our daily lives and not just to that ONE person who got away.

As you can imagine, there are no formula answers to your questions. Since we can’t control people (even God doesn’t try to control people!), the most we can do is try to reach out–or even keep trying. Remember Jesus kept reaching out to his enemies–the Pharisees, even Judas–and in the end, he failed. We can’t do more.

Thank you very much Fr. Johnny for this beautiful reflection on the Parable of the Lost Sheep. It got me reflecting about someone I recently decided to let be since he seems unwilling to accept my love. My problem is not the desire to be “foolish and relentless” in the search but the other person’s hesitation to be found and to stay. But maybe loving him means letting him be, respecting his decisions and continually praying for his healing of his hurts and for his true joy.

i love it how father J sheds light on the gospel like how he did for this weekend 🙂 i have yet to learn how to not give up so soon on the one that got away, because i would run away before the other one got away. perhaps the only saving grace and would be to look at things from a philosophical standpoint, if loving him taught me something about myself and it has broadened my understanding of life, the world and loving, and it has done the same on him, then perhaps, it was not all in vain after all… who ran away or who got away would not really count for once upon a time, there was love and yes it was foolish.﻿

Is there a way I can subscribe to this please?

You are right, Father. God wants us to be merciful. I am especially touch with how the Father talked to the elder son. To me it seemed that the son was told that we are all equal. Thus, we shouldn’t judge others because they are different from us. It also reminds us not to be righteous but instead seek to help find the lost and rejoice with the father when they are found. It somehow reminds us of our mission to everyone…especially those in the peripheries because they are, just like we are, special to God.
Thanks for reading, Father. Jess bless.

What a wonderful call to love again……