Today’s Gospel warns us against leading a double life. We’re accustomed to the term “double life” as referring to people with secret lives: The nerdy newspaper photographer with the alter ego and superhero costume underneath his shirt; the well-respected public servant engaged in an extra-marital affair; the closeted anti-gay activist; or the beautiful celebrity who is secretly plagued by a deep and destructive addiction. 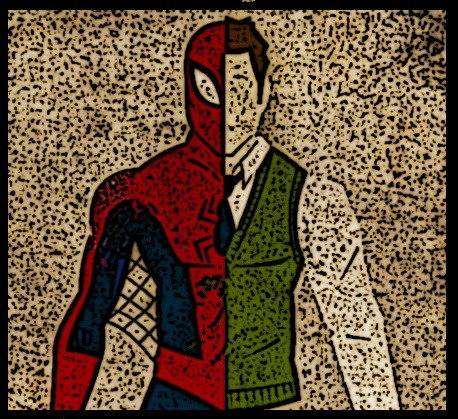 Our Lord today isn’t referring to such superheroes or sinners–not even to those with a stereotypical public life of propriety but a private life of immorality. He’s talking about another kind of double life, a different–more subtle–variety of “spiritual schizophrenia,” one more infectious and widespread than we think.

In what has to be one of his most unpleasant sayings, our Lord tells us: “No servant can serve two masters…. You cannot serve both God and mammon“–where “mammon” literally means an attachment to wealth. What he means here is that we can’t pretend to serve God while remaining enslaved to material riches.

But our Lord isn’t just referring exclusively to an attachment to riches as an impediment to the service of God. In the book Choosing Christ in the World, Fr. Joseph Tetlow SJ, talks about “living according to the flesh”–where my desires and plans (“what I want”) are given priority over moral principles (“what I should do”) and God’s will (“what God wants me to do”). According to Fr. Tetlow, when we prioritize what we want over what’s right and what’s good, we are living instinctively. In other words, we are living primarily according to the principle of pleasure and pain–almost regardless of moral principles: We do what feels good (whether it’s right or wrong!) and we run away from what hurts (whether it’s right or wrong, too!).

Many of us actually profess to being moral, but make decisions based on what we really want–i.e., the pleasure-pain principle. The problem is, we don’t admit it, and worse, we can justify our actions with the most philosophical or poetic reasons. This is the double life that most of us live.

The goal, of course, is to transcend the pleasure-pain principle and to make more and more of our decisions based on what’s right and wrong (the good-evil principle). In short, to learn to live more morally rather than simply instinctively.

Here’s a quick litmus test to check how you’re doing:

1. Would you more often than not choose what is right even if it’s going to cost you–i.e., entail some sacrifice and cause some pain?

2. Would you usually avoid doing evil even if it’s going to benefit you-i.e., you’ll get something out of it and enjoy it?

To complicate things further, there is a great deception going on in our increasingly connected world today. We find ourselves more and more involved in a world that has been conveniently baptized as “virtual reality.” As a result, we unconsciously regard this world as only secondary to the so-called “real world.”

The virtual world is as real as our face-to-face world. The things we say and do online–whether we think we’re doing them anonymously or not (and of course we’re not!)–are just as real as the things we say and do in the so-called “real world.”* As we already know by intuition, our words and our actions online have as much potential to hurt and harm others compared to if we say and do them in “real life.” In fact, sometimes the damage we wreak can be much, much worse because as netizens, we tend to be more vicious. And why not? We feel anonymous and therefore unaccountable. Even more importantly, we’re capable of creating greater chaos online because our posts can reach many more people.

Make no mistake about it: The virtual world is real, and this “virtual reality” offers us a whole new world to lapse into living the more instinctive life of the flesh, an alternative world that is “less real” where we can do what we can’t and won’t in this real world: to give vent to our desires and unleash our hatreds.

Today we often find ourselves caught between a couple of worlds and realities: On the one hand, we have this reality where moral laws should prevail and we ought to do what’s right; and then we have “virtual reality” where, for some, “anything goes” and we can simply do what feels good.

Our Lord Jesus reminds us today that we can’t possibly live the best of both worlds. Put another way: You can’t have our cake and eat it too. You’ll choke.

Note: Which world do you want? If you wish, listen to the Switchfoot song, “The World You Want”

* Note: Critical Realism, founded by the late Roy Bhaskar, has a way of clarifying this issue. We need to ask: “What counts as real?” Usually, we use what is called a “perceptual” criterion for reality, where we say something is real because we perceive it. But it’s not enough; we believe that so much more is real than what we can perceive. A superior criterion for reality, therefore, is causal, so we say that something is real because it can cause things to happen, because it can make some difference in the world. On both counts, virtual reality is real.

5 replies on “ARE YOU LEADING A DOUBLE LIFE?”

Thank you, Fr. Johnny, for leading me to the deeper realities of life….

How wonderful it would be if more of my loved ones and friends could also benefit from the reflections on this site. May I share your Pins of Light to many more, Fr. J?