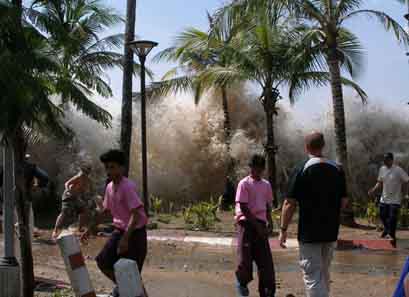 The morning after Christmas Day in 2004 the ocean shook and rose.  And in far too many places in Asia, the ocean withdrew from the land only to return with an unexpected vengeance, a rampaging giant wall of water, sweeping and wiping out whatever lay in its path.   The tsunamis hit Sri Lanka, India, Indonesia, Thailand, Malaysia, and the Maldives, among many other areas, leaving death and devastation.

We never saw anything like it in recent history:  Over 300,000 dead in 9 countries.   But more than the numbers we were stunned by the images of rows upon rows of corpses, many of them children, scattered in the streets of villages that lay in ruins.  Most of all, I still can’t forget the faces of the countless victims who have been left shaken, injured, widowed, orphaned.  For me, one unforgettable image will always be that of a man in Aceh:  He walked up to a CNN reporter who had just emerged out of the first helicopter that landed there, only to break down, stammering in his broken English that he had lost everything.

We can’t help but ask:  “Why?  Why should such a tragedy happen?  Why should there be so much death and suffering?”  In fact, why do things even go wrong in the world?  God is supposed to be all good and all powerful.   Surely being all good, he wants only the good for us, and surely being all-powerful, he can stop bad things from happening!  So why do bad things happen–and why do they happen especially to good and innocent people?

The question of evil and suffering is, of course, one of the great mysteries in life, one that all the great religions attempt to answer.  If we turn to our faith, I think there are three things we can say about it.

The first thing concerns something we can’t say. If God is all-good, we can’t say that he wants us to suffer; that bad things and terrible tragedies such as the tsunami of 2004 are literally “an act of God.”  To regard all this evil and suffering as God’s Will goes against the very heart of our faith; it goes against the very core of our Lord’s revelation to us–that God is all good and all loving.  How can an all-good, all-loving God cause such suffering on His children?  It makes no sense, and it violates what we believe in and I think what we, in our heart of hearts, already know.  A God Who is all-good cannot will such destruction and suffering.

Secondly, God is really all-powerful and has the power to stop such things from happening.  But, for reasons we will never completely understand, even if He can prevent them, God allows bad things to happen–even to good people–although that doesn’t mean that he wills it or that he causes it.

How does he allow suffering?  As we know, God has created a universe in which people have the freedom to sin and hurt others.  He has also created a universe where nature can go wrong.  God certainly could have commanded those tsunamis to go back to where they had come from, but he did not.  Again, for reasons we will never completely understand, he allowed them to wreak their havoc.

God must have a very good reason for insisting on respecting human freedom and the laws of nature, a reason that does not render all the suffering caused by sin and natural calamities meaningless.  We, with our limited reason, can only guess what that reason is.  Many theologians, however, suspect it has something to do with love.  After all, when you think about it, without human freedom, how can we even begin to love when love entails choices and commitments?  In a universe without natural laws, in a magical universe where actions do not lead to their natural consequences, how can we learn to use our freedom responsibly and lovingly?

It’s not a completely satisfying answer, but when we talk about the mystery of suffering in the world, precisely because it’s a mystery, it’s never a matter of reason, but a matter of faith.  At the end of the day, all of us have to make a choice:  Will I still choose to believe in a God who is all-good, all-powerful, and all-wise even without completely understanding?

Having said all that, I go now to our Lord’s baptism because I think it offers us the third thing that we can say about evil and suffering.  The river that our Lord insisted so much on being immersed in is really more than just the River Jordan.  It is more than just any other river.  That river, it seems to me, is the river of our tears, we human beings who suffer because of people and nature gone wrong, even because of ourselves gone wrong.  That river, we’re beginning to see, is the river of our fears, of our troubles, we who find ourselves tossed in these often-turbulent waters, frantically trying to keep afloat as we live our lives learning to love.

Maybe that’s why over the protestations of the Baptist, our Lord insisted so much on His baptism:  He wasn’t simply insisting on going through some religious ritual by the river.  Through His baptism, he is telling us something very important about himself, about God:  that the God who has designed this world where nature sometimes goes wrong and where people too-often go wrong is not a God who keeps His distance.  He is not a God who keeps Himself conveniently far and safe from the chaos of our world.  On the contrary, He is a God who joins us in the fray, a God who is willing to “get His feet wet,” as it were.  No, more than that: He is a God who has actually immersed himself in the river of our tears and fears.  Come to think of it, he is a God who has, in fact, allowed himself to drown in our death so that we, you and I, might live.

Maybe today, our Lord is telling us that in the midst of our own suffering, no matter how terrible, whatever the reason, he is a God who will be with us and near to us.  So with regard to the countless people in our world who are injured, widowed, and orphaned both by nature’s ire and people’s crimes, including ourselves:  We can be sure that the Lord is here with us, sharing in our pain, supporting us and giving us the strength and courage they need.

Dearest Lord, thank you so much for being a God who has chosen to be one of us.  Thank you for swimming with us in our tears. We know that because you chose to suffer and die like us, you are nearest to us when we are in trouble and in pain.  We often don’t understand and we’re also often afraid.  But the important thing is that you are around and that you are near.