This homily for the Third Sunday of Lent is based on John 4:5-42.

Today’s Gospel gives us a strange little story. Jesus stops by a well while his disciples are off doing errands, and a Samaritan woman emerges to draw some water from the well. She probably eyes him cautiously. “A Jew,” she warns herself, quickly looking away. And then just when she least expects it, she hears the stranger address her: “Give me a drink.” 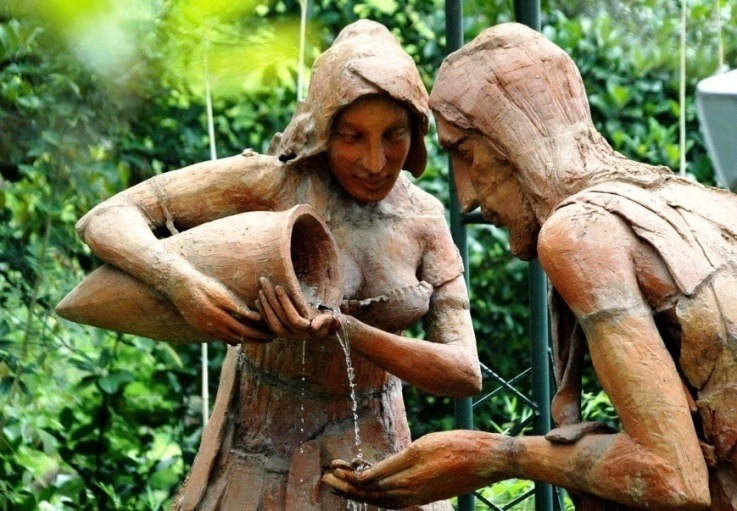 A modern reader like myself is shocked. “Really, Lord? Not even a ‘please’?” To our ears, Jesus’ statement grates like a terse command. The Samaritan woman is also shocked–but for an entirely different reason. She looks at Jesus and asks, “How can you, a Jew, ask me, a Samaritan woman, for a drink?”

You see, at that time, due to their religious disagreements, Jews kept away from Samaritans for fear that they would be contaminated. But here Jesus breaks that cultural barrier, shocking the woman. So, how could he? Well, it’s the kind of thing the Lord does: break down walls.

A lot more goes on in this story, and so much more can be said, but I’m stuck with the Samaritan woman’s question. I’m stuck because it is a familiar question, a question similar to different versions of a question I’ve heard myself ask the Lord countless of times: “How can you, the Son of God, ask me, a sinner for…?”

The feeling is probably best described as a mix of incredulity and awe. It’s hard to believe someone like Jesus would ask me–of all people–for something. Yet that’s what the Lord does. He counts on us to do the work and to make the difference. Remember, the first thing he did when he launched his public ministry was to recruit disciples. He didn’t need to, when you think about it. He could have done the whole thing all by his omnipotent self, but he chose otherwise. His reason for doing so has more to do with us than with him. It’s our need that he’s thinking of–our own need for salvation, our own need to be part of something greater, our own need to have to make the free choice to be part of that.

That’s exactly what happens in his conversation with the Samaritan woman. By asking her for a drink, what he has in mind is not his own need, but hers: her need for living water, the kind that only he can furnish.

Realizing what the Lord asks of us, perhaps we can feel our hearts brim over with incredulity and awe, and we too may ask him, “How can you, my Lord, ask me, a sinner, for something like this?” But remember, whenever the Lord asks us for something, what he has in his mind is our own need.

I pray for grace that I may do Your Holy Will. Amen.

Thank you very much Fr. J for this reflection. When I turned 70 last December I asked the same question “How can you, my Lord, ask me, a ’70 year old’ sinner, for something like this?” That was the time when I was asked to help in our outreach activities for our community. Anyway I said YES as a birthday gift to HIM but i asked HIM to give me strength and the grace of discernment in knowing & doing HIS will in the present moment. “Salamat sa DIYOS!” My Prayer was answered – I was able to visit our rehabilitation center in Masbate (Fazenda de Esperanza)

What is the Lord asking from me? Thank you Father for the good reflections

What a profound insight, Fr. J, that you have presented in this story!

Truly indeed, the Lord has His ways of getting into our lives, of reaching out to us. I am ever grateful for all that He has done for me. Thank you Lord Jesus for coming into my life.

what are you asking me Lord?

Itsn’t it amazing that in this gospel, our Lord initiated the encounter with the woman. In many instances, those in need came to Him or were brought to Him. Here, He came to the woman to make her know of life-giving water. I wonder if the church does that– initiate the encounter with sinners. I am not referring just to criminals in prison but to those who, for instance, live in adulterous relationships or those who aborted their pregnancies. What sort of doors does the church open for them?

Very provocative question that should lead to some soul searching in ourselves and the Church!