This reflection, based on Luke 12:49-53, is a collaboration John, a childhood friend who offered to help when he found out I was down with the flu.

Have you ever gone somewhere where you had to get something done, but there was a line ahead of you and the people in-charge were moving much too slowly? Didn’t you feel like lighting a fire under them to ignite them and get them moving?

That’s how Jesus must have felt. That’s why in today’s Gospel he gives us a line that you wouldn’t exactly expect from the Lord: “I have come to set the earth on fire, and how I wish it were already blazing!” 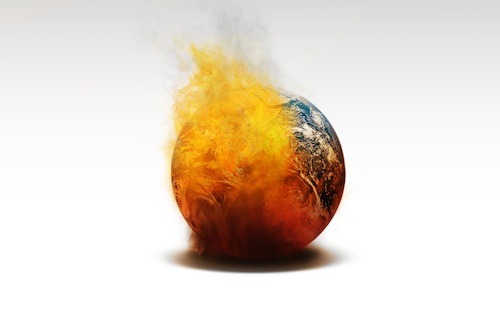 Such impatience is not surprising coming from a man who was himself always on fire for his mission. All he wants is for us to be similarly on fire with God’s Word.

Let’s face it: Most of us tend to get fired up for lesser things–success, fame, money, family, relationships… These are not wrong in themselves; they have their value–and their place–in our lives. But our Lord wants us to see that we have been created for something much greater, something longer lasting. When we get fired up, we sometimes burn–so we may as well get burnt for something worthwhile.

Think of what’s going on in the US elections. Much to everyone’s surprise, a reality TV star is the Republican nominee, but that’s not the worst thing about this candidate. When he first started his campaign, no one took the billionaire celebrity seriously. But since then, his incendiary words–which have only grown increasingly blatant and shocking–have succeeded to fire up millions of people who won him what had been previously unthinkable: the Republican nomination. Now, unless he is stopped, this dangerous man is just a heartbeat’s away from becoming the most powerful man in the world.

How did that happen? How did this man manage to fire up so many Americans so quickly and so successfully? The answer: With fear and hatred–i.e., fear of exaggerated worst scenarios and hatred of immigrants and other scapegoats.

Why is it the case that it seems so much easier to be fired up with fear and hatred than with God’s Word? Why do millions seem so eager to fall prey to a demagogue who need only type 140 characters or less to sow such widespread divisions? What does it mean that it is almost so much more natural for what’s most vile to grow viral?

The sad example from American politics is but one. If we examine our own lives, we see how it is so easy for us to be fired up with the lesser and baser things. It’s almost as if they have a gift for catching fire, whereas when it comes to virtues, we need to spend all night rubbing sticks together to make a flicker.

Maybe this explains our Lord’s words–and impatience. He wants to set the whole world ablaze because he knows  all too well that if we’re not fired up by him, we’ll just end up consumed with something else and burn ourselves with something entirely less worthy of ourselves. Indeed at the rate we’re going, who needs to wait for hell?

Thought-provoking. Will spend the rest of the day, and most probably the rest of my life, trying to find the right answers to these important questions and the courage to do something about it. Is it too late?