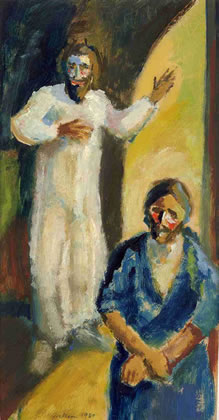 We’re all familiar with this short and simple parable of the Pharisee and Publican. Listening to the parable, we get the feeling that we’ve met these characters before. It’s not just because we’ve actually heard this parable many times, but also because both the Pharisee and the Publican have made their appearances in other Gospel passages–though in different guises.

There is the Parable of the Lost Son, which seems like a straightforward enough parable about God’s mercy until the understandably resentful–and also understandably self-righteous–elder brother shows up in the end, refusing to join his brother’s welcome party, and in the process, revealing the Pharisee inside him.

And of course, there are all those encounters between our Lord and the Pharisees and scribes–clashes, really–when on the one hand, we have, the undesirable bunch of repentant sinners flocking to the Lord (the brave, gatecrashing prostitute easily comes to mind), and on the other, the crew of Pharisees who are scandalized at the sight of a rabbi–supposedly a holy man–mingling with the worst of public sinners.

“Why does He eat with tax collectors and sinners?” they would constantly whisper among themselves and interrogate the Lord’s disciples.

This parable of the Pharisee and Publican is just another response of our Lord to this recurring question. His message is loud and clear: Those who exalt themselves–and if I may add, puts down others–will themselves be humbled. And for as long as we feel self-righteous and reserve contempt for those we consider inferior to ourselves, we will be nowhere close to the Kingdom that Jesus preaches.

Today’s parable, however, also illustrates what St. Ignatius teaches us about the discernment of spirits. In his Rules for the Discernment of Spirits, St. Ignatius makes it a point to distinguish between a regressing soul and a progressing soul because the good and bad spirits treat us differently depending on our spiritual orientation. A regressing soul is a person who goes “from mortal sin to mortal sin” or “from bad to worse” spiritually (personified in the parable by the Publican), while a progressing soul is the exact opposite: someone who is striving to become closer to God and to go “from good to better” (in this case, exemplified by the Pharisee).

St. Ignatius’ point is that for a regressing soul, such as the Publican, the Holy Spirit evokes unpleasant feelings and interior movements to bring the person closer to God. The consolation that God sends to such a person, in other words, doesn’t feel very consoling. In the parable, the Publican has clearly responded to this type of consolation, his pangs of conscience, feeling great remorse and shame for his sins and more importantly, allowing these movements to bring him to conversion.

The Pharisee, on the other hand, would be considered a progressing soul–and well does he know it himself! However, in the parable, this progressing soul falls for what St. Ignatius calls “false consolation”: a device used by the bad spirit to deceive people who are on the right track so as to lead them astray. In this case, the gratitude that the Pharisee feels for his righteousness has, before he knows it, led him to pride in himself and contempt for the Publican. Somewhere along the way, a sense of entitlement has ironically replaced the Pharisee’s initial gratitude for the gift of a holy life that he has received. Gratitude is usually a grace that brings us closer to God, but if we are not cautious, the bad spirit can use that very same grace as false consolation so that what appears to be good actually leads us away from God.

Let this parable then remind us that we are always called to humility, whether we find ourselves in sinfulness like the Publican or in righteousness like the Pharisee. May we also be mindful of our constant need for the discernment of spirits in our spiritual journeys.