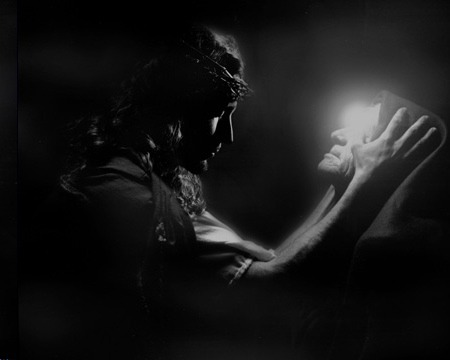 This reflection is on the healing of the blind man in John 9:1-41.

There is something awesome, strange, and sad about this story of our Lord’s  healing of the blind man. It’s a very special miracle for a couple of reasons.

First of all, it is one of our Lord’s most astonishing healing miracle. The man had been born blind, so this was a most important moment in this one person’s life–someone who had never seen anything all his life, who probably did not even have a grasp of the concept of colors, and now for the very first time, was going to see!

We often take this for granted, having been able to see all our lives. But what happens when a person who has never been able to see all his life finally regains sight? What goes on when we discover for the very first time the use of any of our five senses? It’s an awesome and incredible moment, as in this dramatic and moving video clip of a young girl who hears for the very first time.

But the healing of the blind man is also a strange story because this is one of the rare instances when our Lord did not perform his healing instantly. In most of his miracles, it would take only one word from him or a touch (in the case of the bleeding woman, it was the woman who touched the hem of his garment!). Here instead Jesus went through a somewhat elaborate process, smearing–of all things–a mixture of spittle and mud on the blind man’s eyes and then commanding the man to wash in a nearby pool. Only after following such a process did the blind man see. That was a pretty tedious procedure to get healed, but the formerly blind man finally got his happy ending.

Or so we thought. Which brings me to what’s sadly anti-climactic about this story.

The blind whose sight had just been restored would have expected nothing short of celebration, his family and friends, and even strangers to join in his jubilation. If this had happened today, he would have posted the milestone on his newly created Facebook wall, and thousands would have liked it and shared it!

But instead his healing was met with incredulity and interrogation. The authorities at first even denied that he was the same person as the beggar born blind. Even his family and friends were afraid to attest to his cure. Worst of all, he was treated like a suspect, subjected to a thorough interrogation. And the reason for all this was that the cure was simply too good to be true. And also, to make matters worse, the person responsible for the cure was this man Jesus, for whom the authorities had by now developed a strong dislike.

This story tells us a couple of things, I think. First, sometimes we let our biases get the better of us, the way the Pharisees and the scribes more than allowed their biases against Jesus to blind them from recognizing the awesome miracle Jesus had just performed for this blind man. Secondly, healing is a process and can take time–and sometimes others may not be there to support us in our recovery. In such cases, we are invited to act like this formerly blind man who decided to take responsibility for his healing even when no one else stood by him. We must never let small-minded people stop us from celebrating the miracles that God has performed in us.

4 replies on “BEYOND HAPPY ENDINGS”

I realize that we are so spoiled with God. When we ask Him for favors, oftentimes we just want Him to do everything. Here we are being shown that sometimes we have to do our part and possibly get ‘dirty’ in the process. We have to accept God’s ‘spittle’ and work our way to a pool of water to wash ourselves.

A friend who recently suffered a stroke has been given a new lease. He faces not only grueling therapy sessions but the less-than-encouraging-comments of well-meaning people who feel it was better for him to have gone rather than go through this very difficult time. Could this be God’s ‘spittle?’ Is He now asking my friend to look for water to wash himself?

Thanks for this fresh and provocative insight!

Thank you for pointing out that the family and friends of the man born blind could not even rejoice with him at being able to see. But he knew and he knew who was responsible for this miracle. He himself was not afraid to give testimony. The man born blind should serve as an example and inspiration in this day of the new evangelization.

Thanks for sharing, MIng! It also makes me think of our role as family and friends.