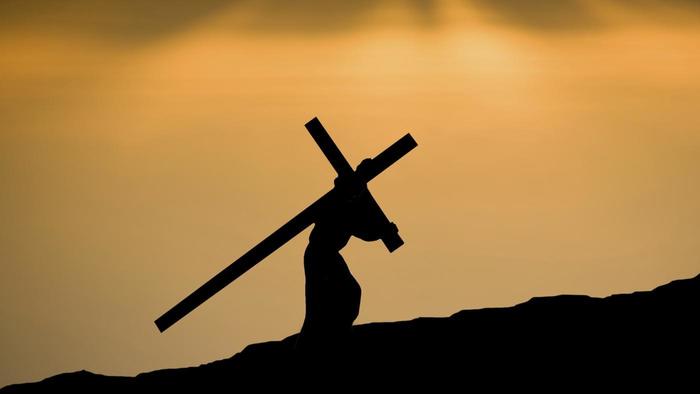 We’ve been through the way of the cross many times before; we already know how it ends. It’s tempting to rush through it.

The point here is not to get to the ending, but to walk with Jesus during his way of the cross, watching him–and watching yourself, letting him do his work on the world–and on your heart.

Jesus begins his way of the cross by walking through the city gate, which is our second door to mercy.

Let us read John’s account of the Lord’s crucifixion. John is usually the wordiest of all the evangelists, known for his lengthy and complex sentences.

In describing Jesus’ way of the cross, John’s sentences are uncharacteristically shorter, narrating the events with very little commentary.

It’s an invitation for us to read between the lines, to savor the silences between the words. This is how we can enter into the story.

So take your time and imagine the scenes, the people, and most especially our Lord.

You may play this piece of music as you read John’s account.

Note: If you cannot see the slideshow, here is the gospel passage:

[13] When Pilate heard these words,
he brought Jesus out and sat down on the judgment seat
at a place called The Pavement, and in Hebrew, Gab’batha.
[14] Now it was the day of Preparation of the Passover;
it was about the sixth hour.
He said to the Jews, “Behold your King!”
[15] They cried out, “Away with him, away with him, crucify him!”
Pilate said to them, “Shall I crucify your King?”
The chief priests answered, “We have no king but Caesar.”
[16] Then he handed him over to them to be crucified.

[17] So they took Jesus, and he went out, bearing his own cross,
to the place called the place of a skull,
which is called in Hebrew Gol’gotha.
[18] There they crucified him, and with him two others,
one on either side, and Jesus between them.
[19] Pilate also wrote a title and put it on the cross;
it read, “Jesus of Nazareth, the King of the Jews.”
[20] Many of the Jews read this title,
for the place where Jesus was crucified was near the city;
and it was written in Hebrew, in Latin, and in Greek.

Whenever you are ready, proceed to the next page.