There’s something curious about today’s parable of the rich man and Lazarus. If you read it literally, its message would seem to say: If you’re rich and comfortable in this life, you’ll be tormented in the next, as in the case of the rich man. On the other hand, if like Lazarus, you’re poor and miserable here and now, you’ll be comforted in the next life. 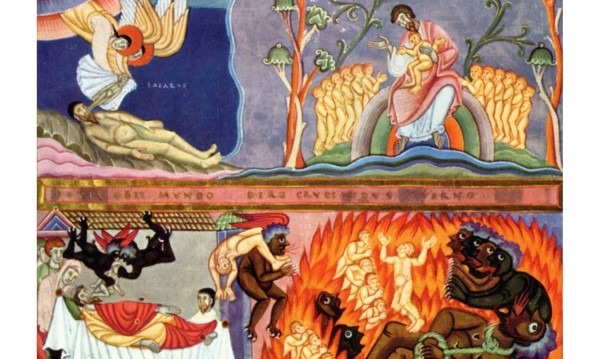 Yet no one I know ever understands the parable to mean this simplistic equation. Even if nowhere does it explain its message, we somehow immediately “get it:” The problem isn’t the rich man’s easy and prosperous life, but his utter lack of concern for Lazarus–his failure or refusal to share a single morsel from his daily feasting–that has led to his fate in the afterlife.

It would have taken so little for the rich man to send his leftover food to the beggar sitting outside his gate, but it would have made a world of a difference–not only to the starving Lazarus then, but also to his own suffering self now in eternity. This realization, albeit late, prompts the rich man to request Abraham to send the ghost of Lazarus to warn his five brothers, all of whom are presumably as wealthy–and as indifferent.

I’ve always found Abraham’s response to this request mystifying: “If they will not listen to Moses and the prophets, neither will they be persuaded if someone should rise from the dead.”

Seriously? I think we could all certainly use some kind of sign. In fact, so many people I know promise to start improving their lives–start helping others more or stop a favorite vice altogether–as soon as they get a sign. I imagine ghosts would be pretty persuasive, wouldn’t they? I remember the one and only ghost experience I’ve had in my life–the only one I cannot, to this day, explain.

It happened–of all possible times–in the middle of the afternoon, precisely at 3 pm, what horror film aficionados would immediately recognize as “the witching hour”–the precise time of day commonly held as the hour when our Lord died on the cross and when evil forces are more rampant.

I was staying in a retreat house (which will remain unnamed lest they lose business!), and that unforgettable afternoon the phone at the end of the corridor rang incessantly. I picked up the receiver and heard a lot of loud, painful static.

Every single hair on my nape and arm must have stood on end, but I managed to put down the phone calmly, my rational self prevailing over my superstitious self and assuring me that it was obviously a prank call. When I bumped into the retreat house manager later that day, I casually mentioned the prank call to him. He asked me which phone, so I led him to it. With a puzzled look, the manager inspected the phone.

“Just as I thought,” he said, holding up a disconnected cable. “This phone hasn’t been working for years.”

If this were a movie, this is where the scary music blares as the protagonist realizes the grave danger he’s in, but just the same, against every conventional wisdom, he doesn’t pack up and leave. He stays until–to the voyeuristic delight of the audience–he finds himself in real deep.

But this wasn’t a movie. I stayed in that retreat house anyway because it would have been too inconvenient to move to another place. But thankfully I didn’t have any more preternatural encounters. It must have been the rosary I made sure to bring with me everywhere I went!

So come to think of it, maybe Abraham is right, after all. Ghost experiences may scare us witless, but it may take more than a creepy voice from the nether world to convince us to actually change our plans–especially if it involves some discomfort.

What all this tells me is that we ought to stop saying: I’m going to change for the better as soon as I get a “sign.” Chances are, we won’t–whether that sign is from heaven or somewhere we’d rather not go. If we truly want to change our ways, we need to make a decision now and begin acting out that decision, even if all we take initially are baby steps.

I think it was Eleanor Roosevelt who said, “Comfort the afflicted. Afflict the comfortable.” Today is a good day to live this out. Try to find those who are afflicted with pain and hunger in your life–and not just physical pain and hunger–and comfort them.

But that’s not all. We also need to “afflict the comfortable”–not others, but  ourselves. If you’re leading a very comfortable life, perhaps it’s time to afflict yourself just a little. Make some small sacrifices; be a little more ascetic. Not because you want to suffer, but because a little sacrifice strengthens the will and forms the character.

So never count on a poltergeist for your conversion. It may scare the wits out of you, but it won’t make you change into a better person.

Postscript: I was a young Jesuit still studying for the priesthood at the time of this ghost experience. The more disturbing–also more hilarious–part of the story was that as soon as I got the phone call, I went into the dining room and found two of my best Jesuit friends chatting over coffee. When I told them about the scary child’s phone call, they just got up and ran! 😀

5 replies on “A SUNDAY GHOST STORY”

What a great lesson of humility and truth you propose us here. This creepy voice seemingly coming from nowhere, reminds us that beyond our everyday environment especially when this one is comfortable, there are realities we do not know by selfishness or because we avoid to go in the overpopulated suburbs and listen the poor and miserable wretches, the marginal and hardest hit people in the outskirts of misery . And if they are poor or miserable, is it not a consequence of our comfort even opulence of the better-off by life (including myself as a member of the middle class)- without even mentioning the minority of super rich?

Your invitation to change our behavior should be included every morning among the items on our agenda “even if all we take initially are baby steps.”

Maybe Fr Tritz will come back like a ghost from time to time to say us “love every person that you come across on your path of live, and see in each human being a neighbor to love”. But if we don’t listen to him when he was present, will we hear his message, if we have the chance to receive a sign?
Merci Fr Johnny

A ghost story in September! But just the other day, I came across PopeFrancis’ homily for the day ( was it carried by Crux or Zenit?) where he talked about the need to think about ” the day after tomorrow”. When we presumably have all become ghosts! Our Lord appeared to Mary but she didn’t recognize Him. He talked with the traveling disciples, and even ate with them but they did not recognize Him. Even His own apostles did not recognize Him when He sat on the shore waiting for them. Wasn’t that the Ghost of Jesus? We need to think about that ” day after tomorrow” so we can prepare for it now!

I agree except that the Risen Lord wasn’t a ghost, but resurrected BODY and soul:)