This homily, based on Luke 4:1-13, was delivered at St. Agnes Catholic Church.

We must concede: The devil is one shrewd creature. As we see in today’s Gospel, he is a true master at his craft, with great timing and equally great strategy. The devil knows exactly when to show up and understands exactly which carrot to dangle before our eyes. And he’s relentless, too–even when his target is no less than the Son of God. 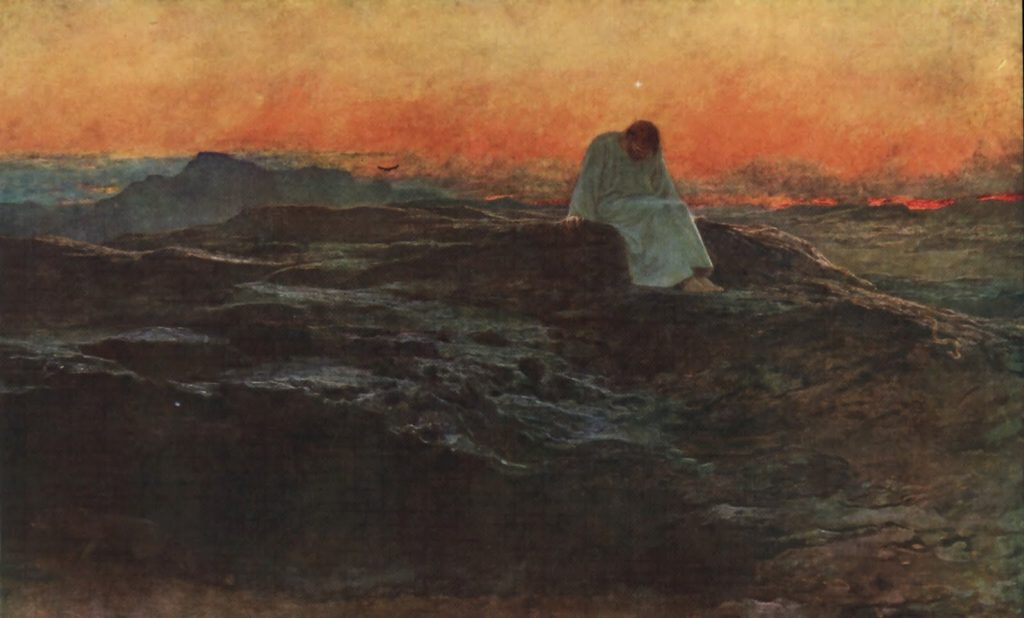 Fresh from his baptism at the Jordan, Jesus goes on a forty-day fast-and-retreat in the desert to prepare for his public ministry. The sound of his rumbling stomach summons the devil with his first temptation: “Hungry? Why not turn stone into bread?”

It’s a reasonable proposition: Satisfying your hunger by making bread–never mind its unconventional ingredient–is not, by any standard, a sin. It’s not as if the bread is stolen, after all.

It’s a brilliantly conceived temptation too because the devil knows all too well that when it comes to more spiritually advanced people like Christ, his best bet is not to tempt them to commit anything sinful, but to get them to do only what appears to be good, but is actually the lesser good. In this case, as our Lord points out to his tempter, the greater good  is not to “live on bread alone,” but to trust that God will always provide.

And so the temptation is foiled, but the devil does not give up although he is much less subtle in his second attempt: This time he offers Jesus all the kingdoms in the world, with all their power and glory–on the condition that Jesus would worship him. If you ask me, he sounds pretty desperate here because surely the last thing the Son of God will fall for is devil worship! But the carrot the devil dangles before Jesus remains rather enticing: If Jesus has come to establish the Kingdom of God, there is simply no quicker or easier way than to do it via martial law: impose the world’s redemption by force; no need for the slow and tedious process of dealing with their so-called free will!

Despite its allure, however, Jesus quite easily dismisses this second temptation because, as he declares in no uncertain terms, he isn’t about to worship anyone else aside from the Lord, his God.

Actually, it’s a temptation familiar to many of us: It’s the temptation of the “quick fix,” of allowing “the end to justify the means”–and there have been times in our lives when such options make so much sense so we end up falling for them and before we know it, find ourselves, on our knees before something other than God.

If we consider the second temptation enticing, the third one is almost irresistible. The devil takes Jesus to the top of the temple in Jerusalem and invites him to toss himself down before the crowd below. The idea, of course, is for a host of angels to swarm in formation for their rescue mission, so the crowd witnesses an astonishing miracle that will instantly convert them.

It’s like the devil telling Jesus: “So you want free will? You want the masses to make their own decisions to believe in you? Here’s how!”

Again it makes so much sense because it would immediately accomplish the goals of Jesus’ public ministry: A miracle like that would win over the people and persuade them to accept his Good News–no questions asked and, best of all, no crucifixion! What’s a little production number to impress the masses? But Jesus, the great master of discernment, sees through the ploy and resists it, quoting Scripture to admonish the devil to stop tempting him.

I think this important episode in our Lord’s life–reported in all three synoptic gospels–presents to us some kind of template for our own temptations and teaches us two valuable lessons:

First, the devil is a genius in designing perfectly reasonable temptations, temptations that can at first sound quite rational but are actually deceptions that can lead us astray. This tells us that reason isn’t always enough to help us detect the devil’s traps; it’s too easy to come up with a multiplicity of well-formulated reasons to justify whatever it is that we are tempted to do. To recognize these devious temptations and to arm ourselves against them, we need to coat our reasons with prayer. Only prayer and discernment–ideally done with a trusted spiritual guide or companion–can help us guard against them.

Secondly, the devil is also an expert at customizing temptations that prey on our most powerful needs and most private weaknesses. We see that in the very temptation of our Lord; the devil is spot-on in identifying Jesus’ Achilles’ heel and training his arrows on it when he is most vulnerable. He fails with Jesus, but with us lesser mortals, he has been far more successful with the same three temptations–and he is still at it!

The three temptations target three of our most basic human needs: our need for security (the first temptation of the bread), our need for accomplishments (the second temptation of the kingdoms), and our need for social acceptance (the third temptation of the angelic miracle). There is nothing wrong with these needs, but if the devil can have his way, they can, as we know, be taken to the extreme and can become obsessions that lead us away from God: Our legitimate need for security can too easily turn into an obsession with riches. Our perfectly normal need for accomplishments may grow into an addiction for power and control. And the very human need for acceptance can at times so quickly be distorted into a vicious pursuit of honor and fame.

A recent survey asked a sample of young adults about what they considered their most important goals in life. Their responses are telling: Over 80% said they wanted to get rich. 50% of the same respondents said their life goal was to become famous. Of course, not far behind riches and fame is high achievement, often the means to achieve the first two goals. It’s the three temptations all over again. And again and again, too many of us fall helplessly for them.

The hitch is that as an unprecedented 75-year Harvard Study of Adult Development tells us, wealth, fame, and success do not, by any means, a happy life make. Tracking the lives of 724 men from various backgrounds, the study pored over decades of accumulated data to conclude that far from what the respondents themselves had initially believed, wealth, fame, and high achievement do not lead to a good life. A happy and healthy life isn’t defined by what we have or what we have done, and certainly not who others say we are. Rather, it is determined by healthy and loving relationships.

As Dr. Robert Waldinger, the current project director, reports: “People who are more socially connected to family, to friends, to community are happier, they’re physically healthier, and they live longer.”

In other words, we are greater than what we have. We are much more than what we can do. And we far exceed who others think or say we are. To equate our self-worth with riches, fame, and high achievement only serves to diminish us. We are, more than anything else, whose we are: our families, our friends, and especially our God.

What better way to begin Lent than to venture into our own desert and learn how to resist the temptation that we are most susceptible to? Among the three temptations, which one has been the devil’s favorite weapon against you? To which of these needs–security, accomplishments, or acceptance–are you most vulnerable? This First Sunday of Lent, let us pray for the wisdom that comes from self-knowledge and prayer. This Lent may the Lord free us from the slavery of our fiercest needs!

Here is the Ted Talk on “The Good Life” by Dr. Robert Waldinger


And this was the homily trailer for this week:

12 replies on “A TEMPLATE FOR OUR TEMPTATIONS”

Have read a MILLION blogs about Lent AND the devil lately (goin’ through some “stuff”)……THIS one HANDS DOWN the BEST.

aaaand i’m stealing the picture…is that a sin? 😉

Thank you Father,a good reflection to renew our spirit.

Thanks for sharing Fr. J. It hits the spot at the right time.

Maraming salamat Fr. J!This reflection is a very timely reminder for me Yes, the tempter was very active this past few weeks because of so many sufferings I had been encountering: in the family finances, deaths of close friends one after the other etc and that I felt abandon by the LORD!— losing hope! I was just holding on through daily masses and rosaries prayed fervently.

Thanks for sharing Dr. Robert Waldinger’s on “The Good Life”. Many good points to ponder & reflect. Need to set one’s priorities right & redirect one’s life journey that will lead me closer to God & carry out His will.
Thank you Fr.J for your weekly reflections & insights; for being the light & inspiration to us.

“We are greater than what we have. We are much more than what we can do. And we far exceed who others think or say we are.”

Yes! We are the Beloved of God!

Thanks for sharing this, Mai. True indeed.

Hi Father! The homily trailer was effective. It makes us look forward to and get excited about the Sunday gospel reading. More homily trailers to come!

Spot on…Lord please walk closely with me this Lenten season Provide me the awareness and discernment as well as the will and determination to act against what seems to be right but really is wrong. Fr J thank you for your inspiring words. Need all the baon we can have in our faith journey.

Thank you Fr J
An eye opener again.
Temptations surely so hard to resist but as you said cling to the Lord He will pave the way, the truth and the liight.