The intersection of Zhongxiao East Road and Dunhua South Road is probably one of the busiest in Taipei. I visited the city last month, and so much has changed since the first time I had lived there twenty years ago. For one, there is a great MRT system, and maybe as a result, the roads now have fewer motorcycles.

But that intersection? It has remained as busy as ever: Pedestrians congregate around the corners waiting impatiently for the lights to change, and the moment they do, we race each other to cross the street as the traffic light countdown begins. 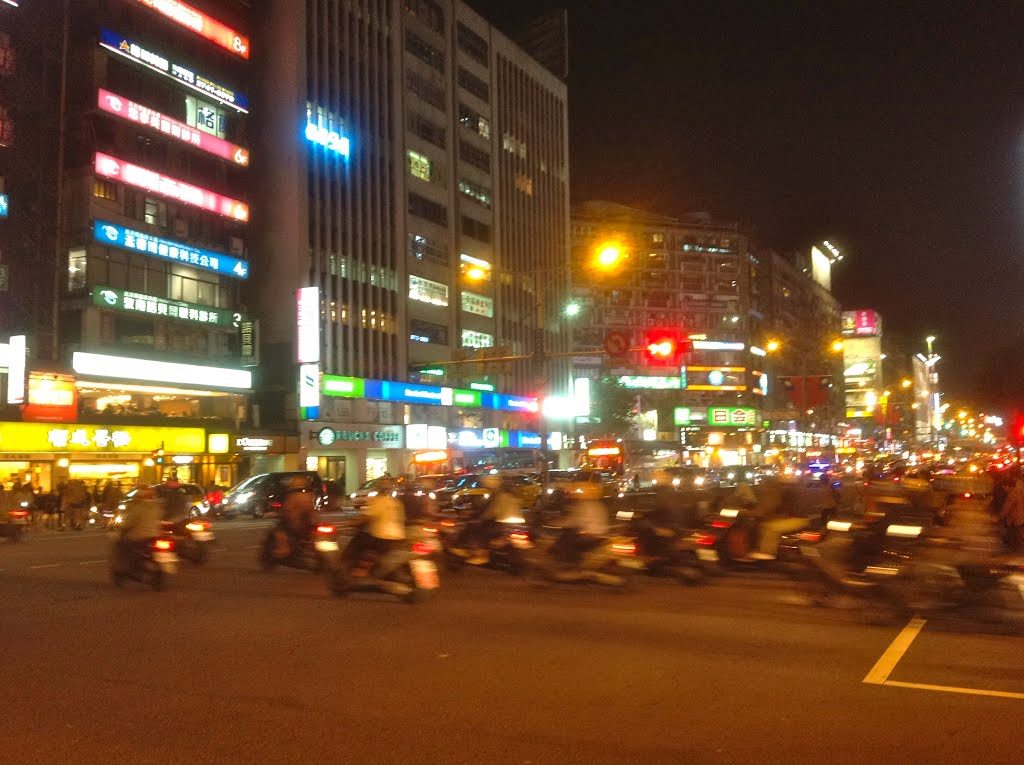 I suspect, however, that there is another reason why pedestrians are so uneasy standing around there waiting to cross the street. There’s a street vendor there, a young man in a wheelchair, wheeled around by his mother. They approach you, and in the most respectful of tones offer you the tissue paper and cotton buds they sell. People more often than not turn them down politely; others simply look away or into their phones, frantically typing apparently urgent messages.

I admit to having done all of the above, feeling the same unease and even suspicion. Of course I blame it all conveniently on my Manila upbringing and my memories of incessant warnings about the operations of syndicate groups.

One night my good friend Father Jerry took me out for dinner. Father Jerry has spent most of his life in Taiwan producing religious programs and working in television. He is probably best known as “Jerry 叔叔” (“Uncle Jerry”), the host of a popular and long-running TV show years ago that taught English and was broadcast all over China.

After dinner that night we found ourselves waiting in the same street corner. And as if on cue, mother and son wheeled towards us and offered us their usual wares. To my surprise, Father Jerry turned towards them and began a conversation that actually sounded like they were old friends. Reaching into his wallet, Father Jerry bought a bag of cotton buds while asking the man about his health. I stood there in shock and in shame. As I looked into the beaming faces of both mother and son, I saw gratitude not so much for the purchase, which they certainly needed, but much more for the kindness and the personal interest so rarely given to them in that busy thoroughfare.

I also recognized what I had always been taught, but somehow never seemed to remember. It is what kindhearted, compassionate, and secret saints like Father Jerry are constantly aware of, but people like me fail to see because we are too anxious to cross our streets or too suspicious of friendly strangers. In that young man, who spends all day with his mother approaching strangers on the streets of Taipei, disguised in that sweaty broken body, is the holy body and blood of the Lord! All around us unfolds a liturgy of the world that can be recognized only with a little more kindness and compassion.

“I know them,” Father Jerry later explained as we crossed the street. “There are several of them around here actually,” he gestured to the general direction of other intersections in the area plied by similarly handicapped vendors.

“By the way, do you need some cotton buds?” he asked laughing. “I have too much!”

“Yes, you do,” I said as I walked behind him trying hard to keep up.

12 replies on “LITURGY OF THE WORLD”

Thank you so much for this lovely homily!
I just came back from a pilgrimage in the Holy Land.
In most tourist sites, I, too, was confronted with vendors, usually male kids, selling their wares – postcards, trinkets, bags, and other souvenir items.
The sizzling temperature is unbearable, and being surrounded by these children who tried their very best to make a sale made me feel sad and guilty.
How I wanted to buy from each of them!
Occasionally,I would give a dollar without buying the item. The gratitude on their faces made my day.

When we were in Petra, Jordan same thing happened – children tugging our elbows. We were forewarned to be careful of being robbed by persistent kids.
Since I could not please everyone, I decided to share with them some caramel candies and chewing gum.
Oh boy, about 6 boys surrounded me asking for more —“another piece for my brother or mother please,” they pleaded.
I talked to one boy and asked his name, age and whether he’s attending school or not and he replied politely. Yes, they could speak English. He was begging me to buy his $5 dollar bangle. Anyway, I just gave him a dollar without buying anything and he sat with me and had his photo taken. He blew me a kiss when our group left. Back to our hotel, I kept on thinking of this boy. “You should have given him more or could have done this and that …” were the thoughts playing in my head, like a broken record.
Well, next time I’d be wiser and kinder to these less fortunate ones.
May God bless us all, especially those boys.
Have a nice day, Fr. J!

What a great story! Than you for sharing. Let’s say a prayer for those boys!

I am as guilty as you are, Fr. J. We are all busy in our own little ways, coping with the realities of life that we tend to ignore the poor and fail to see Christ in each one of us. Fr. Jerry reminds/shows us how to be a follower of Christ in the midst of this world and that a little gesture of kindness can mean a lot to others. It only takes a little to make a difference in the lives of other people. As the Feast of the Sacred Heart of Jesus is fast approaching, I hope and pray for a more compassionate and loving heart. Thank you for today’s reflection.

True! And moments like this open our eyes, so now we have to discern how we can bring a heart more compassionate and loving to the world.

Thank you Fr. J for this beautiful homily. Where I am now is quite different from back home but every time I go home on Christmas time I can say that I always tell my sons to give these children who ask for alms when your car had to stop on intersections. They will rush before the light turns green. I know some of them belong to a syndicate but I always feel that if I don’t give them and if they don’t get enough money the syndicate will harm them. We just give them to spare them with more trouble. Deep inside me I feel I have to help them.

Thank you for sharing. I suspect a lot of people don’t give not because they don’t want to share, but they are embarrassed by beggars and vendors. We recognize ourselves in them, and it’s not a pleasant feeling. So we need to overcome our discomfort and connect to them, and if desired, help them as you do. God bless!

I am equally guilty of the same biased and convenient excuses against vendors plying the streets of Manila. Until recently when I hired a new messenger who was able to finished high school selling sampaguita garlands. He even introduced me to his widowed mother raising 5 kids by earning P5.00 for every garland sold at P20.00. Suddenly my eyes were opened and remember to find God in anything other than the Eucharist. God bless Fr. Johnny.

Thanks for sharing about such unsung heroes that we never hear about. There are so many mothers who toil quietly and painstakingly to raise their children.

What Father Jerry is doing whenever he is out on the street with the people who are less fortunate is what Jesus Christ compels us to do as a way of upholding His lesson in humility. He explicitly reminds in one of His teachings that “whatever you do to the least of my brothers you do it to me.” A simple random act of kindness, that we in our anxiousness to go on with our mundane routines of everyday life, forget that it brings so much happiness to whoever is fortuitous enough to receive it. 🙂

Thanks for the story. I too felt shame several times when facing such situations.

Hi Abe, I know the feeling. What I learned from that experience is that what matters is not whether we give or not, but how we treat them. Cheers.