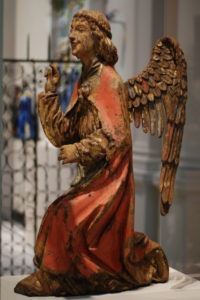 This homily, based on Luke 1:26-38, was delivered at the English Martyrs’ Parish.

There is one character who has worked very hard behind the scenes for Christmas. We hear about this character during Advent, and he shows up at least a couple more times at Christmas, but given all the many things going on at Christmas, we understandably don’t get to shine the spotlight too often on him. I am, of course, referring to the angel Gabriel.

According to Christian tradition, Gabriel is one of the four angels who always stand in the presence of God. His name means “God is my strength,” and the role he has played in Scripture is one of revealer–i.e., a revealer of God’s presence and plan, a role he also plays in today’s Gospel reading.

In today’s reading, we have the angel Gabriel on a most important mission: to reveal to a young Jewish girl God’s plan of salvation. As we can see in our own lives, our God chooses not to impose His plans on us. Never coercive, He instead invites us to join Him and participate in His plans.

It is to relay such an invitation from God–a most special one–that the messenger Gabriel has been sent to Mary. Religious artists depicting this scene of the Annunciation have followed the lead of Scripture in portraying a young girl troubled at such a visitation and such an invitation; but a few artists and poets have also imagined an equally troubled and worried angel. And why not? After all, the angel Gabriel knows fully well that Mary’s response this one single moment will make all the difference in the world. While we have no idea how these spiritual beings think and feel, we can be sure that in that one magical moment, as Gabriel waits for the virgin’s decision, he waits with bated angelic breath.

As it turns out, the Annuciation is but one of his many Christmas-related missions. Just a few months before this, this messenger of God makes a similar appearance to Zechariah in the temple to announce to the startled priest the incredible news of his elderly wife’s pregnancy. Things dont’t go so well for Zechariah, as we know, as the angel temporarily takes his speech away–at least until he gets to name his son, the future John the Baptist. We’re tempted to interpret this as an angelic punishment, but I’d like to think Gabriel enforces silence on the aging priest not so much to punish him but to prepare him for what has probably become for him an unimaginable event of–finally!–fathering his own son. True enough, when it all comes to pass, he regains his speech, but does not only speak but actually breaks into that most beautiful song that we now call Zechariah’s Canticle.

Of course Gabriel may well have been the unnamed angel who speaks to the heartbroken Joseph in his dream, coaxing the carpenter to leave behind his doubts and suspicion, to believe Mary, and to agree to participate in God’s plan by taking up his role by accepting Mary’s Child as his own.

On that first Christmas night, Gabriel is probably one with the heavenly host who sings the first Christmas carol and leads the shepherds to the stable, where along with all the other unseen angels, he hovers over the Holy Child, marveling at this awesome and inconceivable miracle of God becoming human.

Gabriel’s job is far from done after Christmas. He probably is the same angel who instructs the wise men to skip their courtesy call with Herod after finding the Christ Child. Gabriel may also have been the angel who awakens Joseph in the middle of the night urging him to pack their belongings and flee with his family in the dead of night to escape Herod’s wrath.

As we can see, Gabriel is one angel who has been kept pretty busy by this business of Christmas. I think as officially the busiest angel of Christmas, Gabriel has much to teach us who, despite our promises every year, find ourselves inevitably stressed and overwhelmed with the frantic rush of Christmas. The angel Gabriel shows us that Christmas is a legitimately frantic and busy season.  Contrary to what we may think, a lot of work and stress has gone into that first Silent Night–and a lot of work and stress has followed in its aftermath. It seems to me then that it’s perfectly all right to be busy at Christmas; maybe it’s useless to wish otherwise! But Gabriel teaches us that what matters is not whether we’re busy or not, but what we are busy about: All that Simbang Gabi, even all that shopping, all that cooking, all that partying, or whatever else it is that our Christmas keeps us busy in–do they gather people together the way Gabriel has gathered Zechariah, Mary, Joseph, and the shepherds? And do they eventually lead everyone to hover over the Holy Christ Child and marvel at this awesome, inconceivable miracle of God-with-us?

So next time you stumble into an angel this Christmas–whether illustrated on a card, sung in a carol, or just hanging on a tree–remember Gabriel and ask yourself: “What are you busy with this Christmas?”

One reply on “THE BUSIEST ANGEL OF CHRISTMAS”

Thank you for these new perspectives! The greatest story is ever old and ever new!

It is even more meaningful because someone gave me a small angel today and wrote in the card, “You are an angel in disguise.” I take it as an affirmation of being “good” busy,

I am grateful for this praying community joined by your blog. Fr, j,