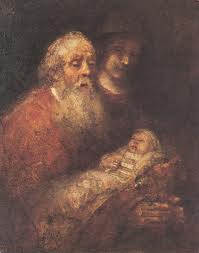 This reflection is based on Luke 2:22-40 on the Feast of the Holy Family.

A Jesuit companion shared a copy of this painting with our community during our Advent recollection. It’s probably the great Rembrandt’s last and unfinished painting, discovered in the master’s workshop the day after he died. It is a painting of Simeon the Prophet, the man to whom God had made a special promise: that he would not see death until he could lay his eyes on the Christ.

And true enough, that apparently ordinary day, as Joseph and Mary presented the Christ Child to the temple for the traditional Jewish blessing and sacrifices, the prophet Simeon was led by the Holy Spirit to them. The canticle he uttered upon receiving the Holy Infant in his arms remains one of the loveliest in the entire Scripture. It is today more famously known as the ‘Nunc dimittis’ based on its first line:

“Now, Master, you may let your servant go
in peace, according to your word,
for my eyes have seen your salvation,
which you prepared in sight of all the peoples,
a light for revelation to the Gentiles,
and glory for your people Israel.”

If you pay attention to Rembrandt’s painting, you will notice something unusual: the hands of Simeon. They are not really holding the child. It is almost as if the child has just been laid upon his arms, and he is hesitant–even afraid–to touch the child with his hands. It looks like he does not know what to do with them!

I think his hands tell us a couple of important things about Simeon’s attitude that we can certainly learn from.

First, his hands reveal both the surprise and reverence that the old man must have felt towards the promised Messiah. He is overcome with awe that he literally does not know what to do with his hands. But also, all his life, Simeon had desired to see the Messiah; all his life he had waited for this moment. Did he ever imagine that it was an infant that he would see? Simeon reminds us that God often surprises us, giving us what we do not expect, and sometimes what He sends us may be the last thing we expect: In this case, a helpless child for a mighty Messiah, for instance. In such cases, as Simeon teaches us, the only proper response is for us simply to receive the gift that God gives us despite our surprise.

But I think most importantly, Simeon’s hands show us that when we receive God’s gifts, we do not respond by grasping or grabbing it. Imagine how Simeon had waited all his life for the Messiah. Wouldn’t it be natural for him to hold the baby as closely as possible, press it against his heart even? Also, wouldn’t it be completely normal for him to desrie to see what this Messiah would eventually do and accomplish? But instead, like his non-grasping hands, Simeon opened up his non-grasping heart and asked to be let go, to die. He felt no need for proofs, or to personally witness the works of the Messiah. What he received that day in the Temple was gift enough. He was grateful and satisfied, believing that he already saw the salvation of God even before it was completed.

Above all, Simeon’s hands teach us about faith, and they invite us to examine ours.

2 replies on “THE HANDS OF SIMEON”

Happy New Year, Fr J! Haven’t heard from you for a long time. Thank you for continuing to be a light unto others. Seems to me that you are blessed by God to be a blessing to others. No better blessing and privilege than that! God bless you! Please stay in touch.

How deep is one’s faith and love for God can be shown in one’s attitude towards life. He is the source of everything. Thanks, Fr. J.