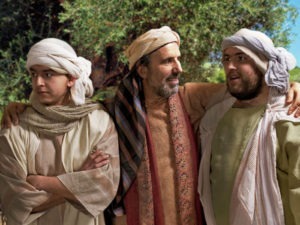 The parable our Lord tells in today’s gospel is pretty straightforward and easy to understand: A man has two sons and asks both of them to go work in his vineyard. The first son says “No” to his father, but later changes his mind. The second one agrees to go, but doesn’t actually show up.

The Lord then turns to his listeners and asks, “Which of the two sons did his father’s will?”

It’s not a trick question; in fact, it’s a virtual no-brainer. “Of course, the first son! The one who actually did the work!” the audience responds, and as expected, they’re right. What the audience probably hasn’t expected, however, is the message of the parable, which our Lord, in no uncertain terms, relays to them. They are like the second son, who pays lip service about obeying his father, but fails to put it into action. On the other hand, the tax collectors and prostitutes–the sinners who have initially said “No” to God–are now making their way to God’s kingdom.

The message for us today is pretty clear as well. It’s not so much what we say, but what we do that defines our lives. It’s not the promises we make, not the resolutions we draw up, not even what we tell the Lord in our prayers that will matter. In the end, it’s what we actually decide to do that will make the difference. Our decisions and actions are the bottom line, not our plans or promises. St. Ignatius of Loyola puts it this way: “Love is shown more in deeds than in words.”

I believe we all have a profound intuition about this truth, an intuition that emerges in our last moments on earth. In a recent TED talk, Matthew O’Reilly, an experienced emergency medical technician from Long Island, New York, shared his experiences attending to people in the last moments of their lives. He often encountered people so badly injured or so seriously sick that based on his years of experience, he could tell–just by looking at the extent of the injuries and the changes in the vital signs– that death was already imminent and that there was nothing more that they could do. The problem was that usually the patients themselves seemed to sense that their end was near too, and they would invariably turn to him and ask: “Am I dying?”

For Matthew, it was not an easy question to answer. During his first two years on the job, he was afraid that if the patients were told of their impending death, they would die in terror and panic, and so he would lie to them in order to comfort them. He would assure them that they would make it even if he knew that they wouldn’t, but he never felt good about it. And so one day when one dying man asked him that same question, Matthew somehow found the courage to tell him the truth. He told him he was going to die. To his surprise, the man’s response was not terror or panic. The man just lay back, closed his eyes, and accepted his fate with unbelievable peace.

Since then, almost every patient he has been honest with has reacted with similar acceptance and peace. Matthew also observed a couple of patterns among the dying. First, they would express regret and ask for forgiveness. An old man preparing for a final cardiac arrest told him, “I wish I had spent more time with my children and grandchildren instead of being selfish with my time.”

The second is the dying’s wish that they would be remembered and that their lives were somehow meaningful. When a woman who had been severely pinned to a vehicle was informed that death was near, all she could do was express her hope that her life had not been wasted, and that she had somehow made a difference in the world. From their brief conversation, however, Matthew learned that she was a mother of two adopted children who were now going to medical school, two children who would never have had this opportunity and would later go on to save countless lives as medical doctors all because of a loving mother who adopted them and provided them a life they never would have had. That woman died consoled by the thought that she had not lived her life in vain.

As Matthew has learned, our last thoughts when we die would be about the things that we have actually done–or not done–in our lives, not the words we have spoken or the promises we have made. Our decisions and our deeds are what will define our lives and shape the memories of those we leave behind. At the end of the day, it is our actions, the things we do, that will prove to be real, that will last and not fade away. This, I think, is the message that our Lord is also teaching us today.

One reply on “DEFINING YOURSELF”

Thanks Olga for sharing the gospel. Praise the Lord