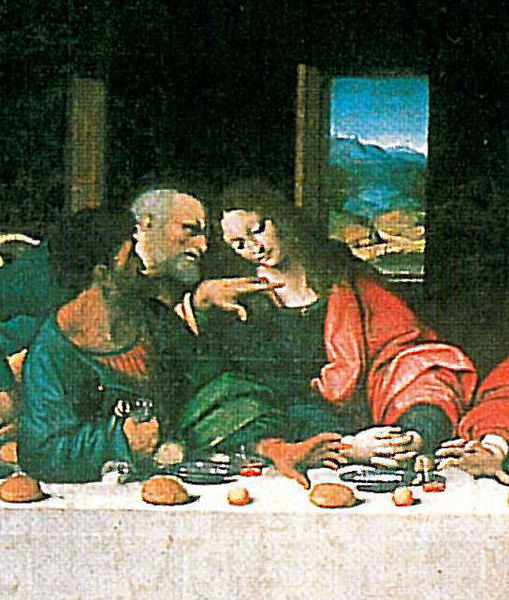 On the night that the Lord was arrested, Judas betrayed him, and Peter denied knowing him.  As we know, Peter and Judas were among our Lord’s closest friends and disciples, so it wasn’t a very good night for him.  Nor for the two disciples.

They both loved Christ and had left everything to follow him.  So what happened?  They started out quite nicely—generous and determined—but like all of us, they must have made a wrong turn somewhere.

That night at supper, Jesus looked around him and was “deeply troubled.”  It wasn’t just his impending arrest that troubled him.  It was also the knowledge that these friends of his would let him down. He knew that one would betray him, selling information about him to the priests and scribes in return for thirty pieces of silver, while the other would deny knowing him at all to save himself.  So much for friendship and discipleship.

How does Jesus react to both?  Surprisingly, Jesus reacted to Peter in the same way that he reacted to Judas. Certainly there was reproach, but no condemnation; only love.

In one poignant and painful scene in Mel Gibson’s “The Passion of the Christ,” Christ falls to the ground as he is beaten by the crowd, but he manages to turn to Peter, who has just denied him three times, and looks upon him with love and sorrow.

What about Judas?  During the Last Supper, Jesus offered him a morsel of bread, perhaps hoping against hope, till the very last minute, for a change of mind.   Jesus knew he had to die, but it didn’t have to involve a friend.  When Judas betrayed him in the garden, our Lord kept his gaze on him, chiding him gently with a question that must have been as hurt as it was incredulous:  “Must you betray me with a kiss?”

The unexpected response of Jesus caught both men by surprise and elicited the same reaction:  Repentance. The Gospel tells us that after Jesus looked upon him, Peter wept bitterly.  Tradition even says that Peter wept so bitterly that his tears left permanent tracks on his face.  Judas also repented.  He returned the money and proclaimed the innocence of Jesus.

But the endings to their stories could not be more different from one another.  As we know, Peter was restored as the head of the apostles, and eventually became the head of the Church.  Judas, on the other, will forever be known as the traitor who ended his life by hanging himself on a tree.

What spelled the difference between these two followers of Christ?  They started out quite similarly, and they both had weaknesses that led each to commit a serious offense against the Lord.   And despite their offenses, the Lord offered them both love and forgiveness.  So why did one hang himself in despair while the other one managed to find his way back?

Judas and Peter recognized their sins, and both repented.  But could Judas  have failed to accept the forgiveness of the Lord?  Was he too proud, or too blind, or simply too scared?

In “The Passion of the Christ,” Judas is chased out of the village by children, and he finds no peace even when he is finally left alone.  His despair turns to horror when he turns around and realizes that he has fallen beside a rotting carcass of a goat.  Is this Mel Gibson’s way of telling us that Judas saw himself as a scapegoat?  In other words, could it be the case that Judas did not own up to his sin and he refused to take the blame, passing it on to others—maybe to Jesus and even to God?  We will never know, for only God can look into the depths of the human heart.  All we know is that Judas failed to accept the forgiveness that was certainly made available to him, and as a result, he despaired so much he ended his life.

Peter, on the other hand, waited and longed for the Lord’s forgiveness.  We know that he eventually did receive forgiveness directly from the Risen Lord Himself.  He owned up to his sin and was man enough–and child enough–to face the consequences.

My guess, therefore, is that what spelled the difference between them in the end is that Peter ultimately relied on the Lord, while Judas failed to do so.

There is a Peter and Judas in all of us.  I’d like to think that Peter and Judas aren’t just historical persons; they’re also archetypes or models of following Jesus.  There is the part of us that is idealistic, impulsive, and almost foolish in our zeal to follow the Lord–the Peter in us.  But alongside this, there is also the Judas in us–the more practical, realistic, and calculating disciple in us, the Judas in us.  Neither is a better way than the other: Each style of discipleship has its strengths as well as weaknesses and pitfalls.

It’s probably no coincidence that Peter and Judas also represent two of our most fundamental drives—our drive for recognition and our drive for control.  Peter had such a great need for recognition; that’s why he was always rushing into things and making a fool of himself or getting himself into trouble.  Judas, on the other hand, was always trying to figure things out and trying to make plans.  It has even been speculated that his act of betrayal was a scheme to force Jesus to exhibit his power and reveal himself as the Messiah.

Maybe this week we can let the stories of Judas and Peter raise questions about ourselves and about the way we have been following Jesus.  Maybe like them, we too are full of our good intentions and holy desires.  Maybe like them, we too love Jesus dearly and are sincerely determined to follow him to the end.  But like them we are also quite capable of denying and even betraying the Lord because of our personal flaws.  Indeed what happened to Peter and Judas can happen to the best of us.

To follow Jesus doesn’t just mean to obey his commands or to imitate his ways.  To follow Jesus also means always somehow falling a step behind him, always fumbling behind him, sometimes taking a fall the way Peter and Judas did in their following of Jesus.  But the important question is not whether we fail or fall in our attempts to follow Jesus.  As Peter shows us, what’s important is whether we are humble enough and open enough to the Lord to allow him to pick us up.

Here’s a Quick Question for you:  “How do you follow Jesus?  Which tends to be your style–Peter’s idealistic, impulsive discipleship or Judas’ realistic, practical discipleship?”  Each style has its strengths and weakneses.  Think about it, and share a thought, a feeling, or a question.

(image:  detail from “The Last Supper” – Judas, Peter, and John)