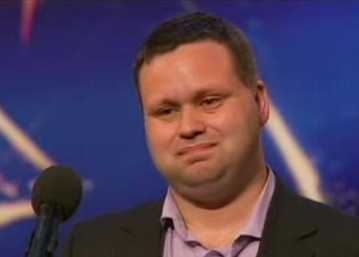 Sometime ago I found this interesting and inspiring video on YouTube.  The video is from Simon Cowell’s newest star search competition in the UK called “Britain’s Got Talent.”  The clip shows the audition of a certain Paul Potts, a portly, ordinary-looking man in his late thirties, who makes a living selling cell phones.  Bullied by classmates all his life, Paul grew up insecure, with very little confidence in himself.  For years he dreamed of becoming a singer, but with little success, so when he heard of the new talent show, against his usual inclination, he picked up his little grain of faith in himself and joined the talent competition.

In the tape, as he is called for his audition, Paul waddles onto the stage, a shy humble man.  He faces the judges, among whom sits Simon Cowell, and forces a smile, revealing his imperfect set of teeth.  The three judges look at him unimpressed, and ask him what he plans to do.  When he says, “Sing opera,” the camera catches the judges exchange exasperated glances.

But then Paul opens his mouth to sing, and their collective jaw drops.  His voice takes flight.  Not a few in the audience find themselves in tears.   When Paul finishes his song, the room explodes in wild applause.   One of the judges, wiping her tears, declares that he is “a little lump of coal that’s going to turn into a diamond.”

Prophetic words:  Paul went on to emerge as the champion of the competition singing Puccini’s “Nessun Dorma.”  His audition tape has currently been viewed on YouTube—as of this writing—over 19 million times.  Last July 16, his debut album “One Chance” was released in the UK, and just one week later, claimed the number one spot in the UK Album Chart.

While watching the video, I found myself cheering for Paul Potts as the audience and the judges did.  So, what is it about underdogs that is so irresistably appealing to us?

Here’s my guess:  It’s the God in us that makes us favor the underdogs.  Look at Mary’s song, the Magnificat:  It’s a song about underdogs.  Mary sings of how God looks upon his lowly servants, lifts up the lowly, and feeds the poor and the hungry.  In contrast, he scatters the proud, casts down the mighty, and dismisses the rich.  In the Magnificat, God so blatantly and shamelessly favors the underdogs that one can’t help but wonder why he’s such a sucker for them.

But surprisingly, it’s such a common theme in the Scripture that scholars have actually named this phenomenon the “preeminence of the younger sibling.”  Usually it is the younger or weaker offspring who receives God’s favor.  Just think of Abel (younger brother of Cain), Jacob (younger twin brother of Esau), and David (anointed king instead of his older brothers), to just name a few in the Old Testament.  It’s almost like it’s the weaker ones who always end up as God’s favorites.  The Magnificat simply extends this preference to the poor, the powerless, and the marginalized–people like Mary and Elizabeth.   Maybe this “favoritism” is the reason why when God became human, he chose to identify with the underdogs and became one himself.

If it’s still hard for you to understand why God would prefer the lowly and the weak, I suggest you watch Paul Potts’ audition for “Britain’s Got Talent!”  (uploaded in the video section).  If–like the audience and the judges, and like myself–you find yourself rooting for this insecure and ordinary-looking mobile phone salesman, I suspect that it’s God moving in you, his compassion stirring in you.  It’s that part of us that’s irresistably, hopelessly, and divinely attracted to underdogs.