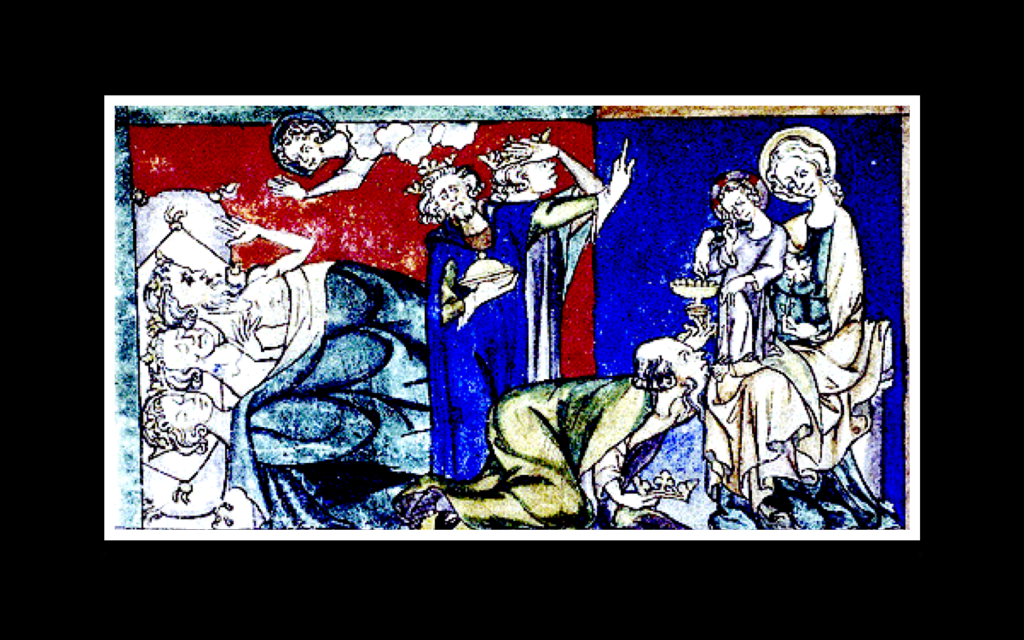 Here are two points that struck me while reading and praying over this passage this time around. Perhaps they are similar to yours.

First of all, the Wise Men’s experience of waiting was very different from Zechariah and Joseph.

Unlike Joseph, the Wise Men found what they were waiting for. Joseph was waiting to begin his future with Mary, but what he ended up with was something totally different from what he had been expecting.

Which one is more similar to the type of waiting that you might be experiencing this season? Why?

Secondly, the Wise Men set out on a journey without any guarantee–except for that sign in the sky. Theirs is another example of faith not as 100% certainty, but on the contrary, full of uncertainty–but just the same, they decided to take the first step. It is quite plausible that during their long journey, they may have questioned themselves and perhaps they were tempted to turn back. But they persisted. Like Joseph, they model for us what faith really means: 100% commitment without 100% certainty.

Moreover, the self-questioning probably didn’t stop even when the Wise Men reached their destination and found–of all things!–a baby wrapped in his mother’s arm, they must have thought: “Is this the prophesied King of the Jews?” But just the same, they trusted, offered their gifts, and paid homage to the infant Jesus.

Are you being invited this Advent to this kind of faith–to believe, to trust, and to commit without the benefit of a foolproof guarantee? If so, what first step can you already begin to take?

Before proceeding, consider responding to any of the two Reflection Questions above if you wish–for the benefit of others who may learn something from your sharing.

11 replies on “IMAGINING WHAT THE WISE MEN WENT THROUGH”

I am like Zechariah, who has given up on dreams because they just seem impossible now.

I am like Joseph, who knows the pain of loss and betrayal but still chose to do right, despite what his heart is telling him.

I am like the Three Kings/Magi, who has been seeing all these signs pointing to a star that seems to indicate where they should head to find what they are looking for. Like them, I only see crazy signs and feel a crazy hope in my heart, that I will find myself out of the wilderness.

As a senior citizen, I often wonder what God has in store for me now that I’m at the “Waiting to Board” phase of my life. This retreat made me realize that I should have faith in what the Lord has planned for me. Until the time I will board on the my last journey, I must continue to do His will by helping those around me.

Yesterday, I tried to say a little prayer, f technical reasons, the prayer was not submitted.

As I fervently waited for Christmas, things came unexpectedly. I expected a restful and happy Christmas. In the process, however, unexpected things occurred: family conflict; my mother’s illness.

Lord on this last Sunday of Advent, I pray for things to get better. I pray for my mother’s health so that she may be able to get out of the hospital tomorrow and be able to celebrate Christmas with her sister.

I pray for peace and happiness of everyone at home during this Christmas Season.

I pray for all of God’s people that they may savor the birth of Christ in their homes, in their workplaces and wherever they are.

I have been praying for financial help from the Lord, our funds are getting low & lower as days pass. I pray for faith, I pray to Jesus strengthen my faith, not to worry, that God is in control, He will provide… Amen.

I have been praying for financial help from the Lord, our funds are getting low & lower as days pass. I pray for faith, I pray to Jesus strengthen my faith, not to worry, that God is in control, He will provide… Amen.

My personal faith experience reflects the experiences of Zechariah, Joseph, and the wise men. There are times of waiting for something to happen but the waiting is to long, there are times of revisiting plans and letting go of the former, & there are also times of uncertainty that lead to “second thoughts”.

We need the examples of faith as shown by Zechariah, Joseph, & the wise men from the east. Their faith experiences highlight their humility, trust, openness, and courage to accept God’s design and plan for them. And God never failed them. God surprised them.

Indeed, I am invited to fully believe that there is something in store for me in the future. On one hand, like the doubting Peter, I feel like being stupid for not ensuring with 100 percent certainty what the future would be. But who am I to say there is 100 percent certainty? This is the invitation for me to venture into the dark that I may eventually see the light…

Steps? Difficult it is because steps could either be forward or sometimes backward.

What I pray in this season of Advent is firmness of mind complemented with a faith so strong that no doubts, no fears can bar the way…

Dear Lord,
Thank you for the gift of faith and the ability to be persistent. Am so grateful for showing me even just a glimmer of the Star of Bethlehem to guide me into the correct orientation.

Dear Jesus, please increase my faith and help me not to lose hope in my imperfect family. Bring me to deeper conversion. Make me an instrument of your peace and joy in this messy world. Amen.

Lord, please help me to continue to worship you while waiting in this season of my life now. I pray to strengthen my faith and trust in you each day. I offer my YES to you.

i am at a low point in my life at this time, but i have decided to continue on praying, to continue on believing in God, that every thing will be well. this decision somehow gives me a sense of direction now. this is so, because i have reminded my self that indeed, in the past, and many times, i have felt God’s presence. HE has backed me up all this time.