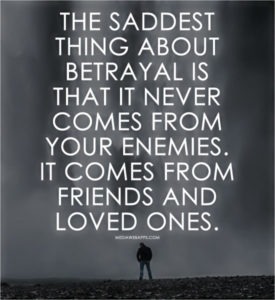 This has got to be one of the saddest and truest statements we can read anywhere. It says it so simply and quietly. And when I try to imagine the speaker or the writer, whoever it is, I detect no trace of anger or bitterness in his face or voice; just a sad, quiet acceptance or perhaps a resignation to the way the things are.

No one who has experienced betrayal can disagree with it. What makes betrayal so heartbreaking is that by its very definition, it can, as the statement goes, never come from our enemies. Betrayal is a crime reserved only for those we trust and love.

It’s the most loathsome of sins. In his Inferno, the poet Dante has saved the deepest and most horrifying circle of hell for traitors, the most notorious of whom spend eternity locked in the jaws of Satan.

It’s also the deepest of pains. It’s hard to describe that heart-sinking moment when we finally realize that we have been betrayed. Think of Julius Caesar, who, as he bleeds, turns around and winces not so much from his fatal wounds but from recognizing his trusted ally among his treacherous foes: “You too, Brutus?” The question is soaked in deep scarlet disbelief.

Or recall our Lord in the Garden of Gethsemane, when the kiss of one of his closest friends seals his fate, an army right behind waiting to pounce. “Judas, must you betray me with a kiss?” Another question, also bewildered. Maybe the only way we can meet betrayal is with a question.

It’s a moment we fight and deny until finally, hopelessly and helplessly, we give up and with great reluctance concede that yes, it does look like we have been betrayed. But the pain of betrayal lingers long after that moment–sometimes for years–resulting even in depression if only because even after recognizing our betrayal, sometimes we just can’t bring ourselves to be angry.

The Gospel reading today isn’t really about betrayal. It’s about our Lord Jesus who, like a good shepherd, never abandons his flock and offers his life for his sheep. But maybe what made me think of betrayal is all that talk about hired men who abandon the flock and wolves that attack the sheep because yes, we’ve been there, done that. We’ve been abandoned and let down; we’ve been attacked and harmed, bitten by the very mouths we’ve fed. And we’re hardest hit because betrayal can come only from the most unexpected places: hirelings who play shepherds and wolves who come disguised in a sheep’s most immaculately white wool.

Years ago, a priest told me something I have never forgotten. He said, “Always remember: Your friends may come and go, but Jesus–only Jesus–chooses to stay.” That priest never warned me that our dearest of friends could also actually choose to harm us in the most unimaginable ways.

But how true it is that Jesus our Good Shepherd never leaves us, no matter what. In our deepest pains, in our darkest depressions, when reeling from the blows of betrayal, we feel most broken and alone, he is there, faithfully watching over us, sympathizing with us in a way only one who has himself been betrayed can do, patiently calling out our name with a Shepherd’s voice that gently gathers our scattered selves.

27 replies on “TALK OF SHEPHERDS, SHEEP, AND WOLVES”

Always thankful for the reflections posted in pins of light.
It’s true that it’s so painful to be betrayed by people you thought will support you. But the realization that Jesus is there when you’re at your lowest is a great consolation.
I’ve learned to let go of past hurts and now I’m happier…
🙂

He guides me in right paths for his name’s sake.

When my wife and I give, we also say and try to believe that we are doing this without expectations of acknowledgement or reciprocity. I believe that we decide to do this to avoid disappointments and the feeling of betrayal when the opposite happens. I am not sure if by doing this, we sometimes do not put sincerity in our giving and loving. But what I am sure about is that everytime we experience hurt, disappointments and betrayal, we also remember what we have done to others in the past. It makes forgiving easier as we hope that we too are forgiven. You are very right in this; good insight and reminder.

TRUE! ONLY JESUS REMAINS FAITHFUL TO US TILL ETERNITY. THANK YOU FR. JOHNNY FOR THAT LOVELY INSIGHT ! HOPE TO GET THIS INSIGHTS FROM YOU ON A DAILY BASIS. WOULD LOVE TO SHARE WITH MY FRIENDS ?

…”He gathers our scattered selves”….So aptly said, so deeply articulated….Thank you Fr. Johnny.

I am a mother who has sacrificed much for her children and yes, the most hurtful things ever said to me has come from them. However, because a mother cannot but love her children, like the good shepherd, my bleeding heart continues to “call them home”.

How true and how it hurts.

Fr J
Somebody has hacked my tlc acct in yahoo and it will break my heart if I would not be able to receive my weekly homily from you please send it to my gmail acct Lucia 1 sister @gmail. com thank you so much Father J

I was referred to your blog through FB and feel so grateful. Am I so moved by this reflection. I am also a RC priest and a subscriber to Jesuits Communications. Now this request: it is possible that you post your reflections at least a day before Sunday? It would be a great help. Thanks a million. God bless.

Thank you for your kind words. I will try my best to do that.

A priest friend once said, “We give the people we love the permission to hurt us.”
Indeed, those we don’t care about can do more hurtful things and we might not even mind.

This is so true, so in a sense we give others the power to hurt us. The problem is, it’s not so easy to reclaim it.

Thanks Father J
Betrayal is a two edged sword. Forgiveness is difficult to give but if we think about how The Lord Jesus who has abundance of love and ever ready to forgive then who are we? He is God and yet he waits for us to come back to Him anytime to ask Him for this grace.

The Lord indeed is the best model and reason to forgive especially those hardest to forgive.

“Maybe the only way we can meet betrayal is with a question..” this is for me the most healthy way in dealing with betrayals even if I don’t find immediate answers to my question…but knowing that Jesus Himself had such an experience is for me very consoling…He is always there through thick and thin…

Thanks a lot Fr. Johnny…this is a very timely reflection…

Yes, questions are good and often more helpful than ready answers. 🙂 Thanks for this.

And we too, have betrayed and harmed our sheep, we too have hurt the ones who trusted and loved us…..oh how we know and have been through the pain of being betrayed…… and of having betrayed….Oh Lord, stay with me.

What an important–and humbling–reminder. When we lick our wounds inflicted by those who have betrayed us, we should also think about the wounds we have inflicted on others–and try to mend them if we can. Thanks for this insight!

Thanks for this Father. Grateful as always for your weekly reflection of the Gospel.

And yet, in my life, it is betrayal – above all else – that God uses to teach me forgiveness.

As my best friend likes to remind me: Aslan is good. But he is not tame.

Betrayal is a hard way to learn forgiveness, but a most effective one! I love that line about Aslan. Thanks for sharing.

How well-written down to the core, Father. It is probably one of the greatest faults in any relationship. I think one really needs to pray for a lot of grace in order to forgive someone – a friend who has betrayed you.

Indeed we should pray for this much-needed grace. I suspect sometimes the problem is we don’t want that grace so we don’t pray for it (and I confess that I speak from experience).

“I suspect sometimes the problem is we don’t want that grace so we don’t pray for it.”-
Ouch.
These words ring so true.

so aptly worded. the pain of betrayal digs as deep as the trust given.
a scar remains and seen from the positive, is a reminder to move
on and learn from the experience.

The desire to “move on and learn from the experience” is a grace that we should be thankful for as it is not so readily given to all. Thanks for this, Marites!