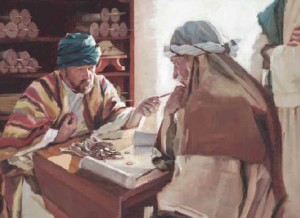 Our Lord was notorious for his parables. His stories were powerful because they were vivid, but to the original audience, they must have been also quite provocative. Just last Sunday, we heard three parables, one after the other, stories that are really more controversial than we give them credit for today.

But maybe because we’ve grown so unfamiliar with their images, and so familiar with their messages that by the time we hear these stories today, more than 2000 years later, they are no longer as vivid or as provocative as when they were heard by their first generation of listeners.

Jesus’ parables, we could say, have been tamed by time.

But not today’s. At least not for me! Despite all these centuries, the parable we have this morning–which, by the way, comes right after last Sunday’s Parables of the Lost Sheep, the Lost Coin, and the Lost Son–remains pretty much untamed, pretty hard to figure out, and pretty challenging to preach on. Just my luck!

At first glance, “The Parable of the Dishonest Steward,” as it has come to be called, has a most puzzling and ambiguous message.

Think about it: A steward is about to be fired by his landlord for allegations of cheating and mismanagement, so he comes up with a clever but dishonest plan to make sure that he will enjoy the tenants’ good will even after he loses his job and position as manager. What does he do? He decides to cut down the debts of the tenants: He gives them a huge discount, gets them to pay what they can now afford, and writes off the rest. Of course this is quite dishonest, but the steward has already been acting dishonestly even before this, having padded the tenants’ debts and added outrageous interests to them in order to make a profit for himself.

What’s disturbing about the parable is not what the steward does, but what his master does. His master, the absentee landlord who has already expressed his intention to fire him for dishonesty, now lauds him for doing exactly the same thing!

And of course in telling the parable, our Lord himself seems to be praising the steward for what he has done, and I don’t know about you, but the Lord certainly sounds like he’s encouraging us to do the same.

Could the Lord actually be encouraging us to be dishonest?

Based on the quick research I did, I’m relieved to say that nope, the Lord is not commending the steward for his dishonesty. This is unthinkable especially right after the parable, our Lord exhorts us precisely to be honest in all our affairs, both big and small.

What the Lord is praising the steward for is not so much the manager’s purpose—which, as we know, is far from selfless—but his action and the effect of what he has done: By reducing the tenants’ debts even if he has done this only for selfish reasons, he has, in effect, lightened their burdens. More than anything else it is the forgiveness of debts that the Lord is most pleased about, how the steward has cut down what the tenants owe his master—never mind his impure motivation, never mind if he did this only to save his own skin.

In Luke’s vocabulary, “debt” usually refers to what we owe God–i.e., spiritual debts or our sins. So the message of the parable is that God is happy whenever we forgive others, whether the debt we write off is against us or against God, and whether our motivation in doing so is perfect or not.

Sometimes I become too preoccupied with first getting my motives perfectly right and pure before I concede to forgive someone–or even to do anything good, for that matter. I almost insist on an ideal of perfectly pure motivation before choosing a good action. This insistence is most likely rooted in some kind of spiritual pride because somewhere inside me I’m convinced that unless my motives are pure, whatever giving or forgiving I do isn’t going to be worth much, and I want my good deeds to mean something.

The biggest surprise, of course, is that the master is pleased with him for the very thing he was getting fired for. By cutting down his tenants’ debt without authorization, the manager has once again squandered his landlord’s property. The difference this time is that the squandering–even if done for his own sake–has benefited those who most need it.

We all of us are but recipients and stewards of God’s mercy and forgiveness. It’s hard to forgive those who have hurt us, but sometimes it’s tempting to hold back because we want to make sure we’re perfectly prepared to do so. Let’s not begrudge others what the Lord has so generously lavished upon us. Just like the landlord in the parable, God will be most pleased when we squander His mercy on others. In other words, even if our motivation is far from perfect, we’re invited to just do it. Just choose to do the right thing. Just forgive even if it’s only to save our own skin.

The good news today is that forgiving will do much more than that. It will also save our soul.

4 replies on “SQUANDERING THE LORD’S MERCY”

What a refreshing take on this often misunderstood parable of our Lord! Thank you for unpacking it for us. It drives home what He wishes us to learn and do: “Forgive us our debts, as we forgive our debtors.”… “Love one another as I have loved you.”

This is where the end justifies the means, di ba? God, in His great love for us, breaks rules of logic. ?

At last a homily I can truly feel….. thank you Fr. Johnny!