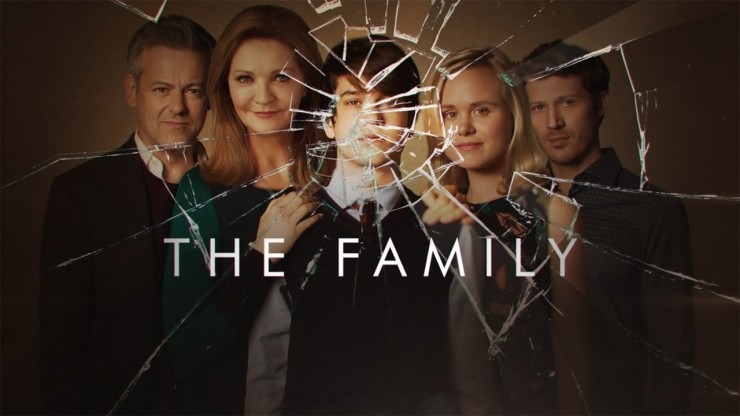 Despite what critics consider its cheap shots, the show has touched me in a deep way. I was struck by the pain and the trauma experienced by the boy’s family. Snatched by a stranger when his mother was campaigning for public office, the boy disappeared without a trace, leaving his different family members racked not only with a lingering and profound sense of loss, but also with guilt and confusion. Subsequently, Adam’s mother poured herself into her political career, eventually getting herself elected town mayor. His father authored a bestselling book on grief and loss and went on tours to give talks on the subject (not to mention getting into an affair with the investigating officer). Adam’s brother turned into an alcoholic, and his sister coped by shutting down her emotions.

And just when they thought they had learned to accept their loss, this boy showed up again, ten years older, acting like a stranger and giving them more and more reasons to suspect that he actually is. The irony though is that even if they are unsure of this boy’s identity, everyone–perhaps with the exception of the brother–seems afraid to lose their Adam again and is willing to do anything to keep him, if only to keep their lives normal again–at least based on the latest episode, as of this writing!

The show has captured how traumatic it is to lose someone–especially if that person is snatched away from you as suddenly and as mysteriously as Adam was.

We know the feeling! All of us have at some point in our lives lost people dear to us–sometimes to death, but often to life. Before our very eyes, a person is snatched away from us, sometimes for the most incomprehensible of reasons, and he or she is suddenly and permanently absent in our lives. We are no strangers to the pain and the trauma of losing others.

But some us have also experienced losing ourselves. Something happens–or does not, and one day we wake up and feel that we are no longer ourselves. Something in us has died or disappeared, snatched away from us in the night. Suddenly we don’t really know who we are, unsure of our very own identity. It almost feels like our former self has been lost and is irretrievable forever.

I talk about losing others and losing ourselves because in today’s very short, Gospel reading of only three verses, our Lord Jesus makes a bold promise. He will make us unsnatchable: As long as he is around, no one can snatch us away from him or take us away from his Father’s hands. He promises us his protection and gives us this guarantee.

It’s a significant promise, one for which we can only be grateful. We know all too well the many temptations in this world of ours. It is so easy to lose our way and to lose our souls in a world where the wicked seem to win and prosper much more often than those who “play nice” and finish last. It is consoling to hear the Lord promise us that no matter what happens in our lives, he will make sure that we are not snatched away from him.

But this promise can be fulfilled if and only if we are sheep to his Shepherd: If we listen to his voice and follow him, and if we nurture a relationship with him that permits him to know us the way a shepherd knows every single one of his sheep. If we don’t want to be snatched away from Jesus and his Father, we must make sure to take care not only of our prayer lives, but also of our moral lives. If the Lord is truly a significant person in our lives, we should be able to spend time talking with him as we do with our dearest friends, and he should make a difference in the decisions we make and the actions we take.

The promise the  Lord makes to us is the same promise that every mother makes to her child. Every mother I know–no matter how exhausted or burnt out, or how bewildered, heartbroken or even angered by her child’s behavior–swears to do everything in her control to help and protect her child.

All this reminds me of the Stephen Sondheim song “Not While I’m Around, ” a tender and haunting ballad from the musical “Sweeney Todd: The Demon Barber of Fleet Street.” The lovely irony is that in the play, it is a child who makes the promise to a mother. The homeless boy, Tobias, pledges to protect his foster mother, Mrs. Lovett, singing to her words more endearing than reassuring because he is, after all, only a child:

“Nothing’s gonna harm you
Not while I’m around…
Demons are prowling everywhere nowadays
I’ll send them howling I don’t care, I’ve got ways.”

Here are two versions of the same song: You may choose to listen to the song from the movie or Josh Groban’s version below–or both! 🙂

If we listen with an open heart, the words may as well be coming from the Lord. Let his song lead you to prayer and to thanksgiving for His love and your mother’s love for you.

The Lord, with his big hands, will hold us and protect us if we but listen to him and follow him. How reassuring! Despite our frailties, He will not let us go. Thank you, Lord.

Thank you for all your beautiful and edifying reflections, Fr. Johnny!

You talk about losing others and losing ourselves. Each of us feels sadness and sorrow at the loss of a loved one when he / she passes away. And very few are people do not get lost at one time or another on the way of his/her life. It is maybe still more traumatic when a lost child comes back after years and his parents are doubting about his true identity.
Here in Europe, the peoples of our countries are currently experiencing a double trauma with the influx of hundreds of thousands of refugees from the Near East and Africa. We are doubting about their identities. Most of us are not able to recognize in them our neighbor. The Good Samaritan became a stranger in Christian countries. And a large majority of European peoples go astray and are losing themselves in blind alleys or in paths that lead to violence, forgetting Jesus’ words : “I was hungry and you gave me something to eat, […] I was in prison and you came to visit me.”
Fortunately Pope Francis illuminates the way to remind us to return home.
Shall we know to welcome the refugees with that sweetness which the Lord characterizes as meek. And you compare the meek to a great stallion at full gallop in a meadow which instantly stops at his master’s voice. As you wrote your homily “Not for the faint-hearted” : ” The meek that our Lord blesses are people who have a passionate commitment to obeying the Father’s Will”
Would we collectively act with such meekness and power to accommodate those who are in distress?

How beautiful. To God be the glory for the talent He has bestowed on you Fr. J you are an educator linking your homily to a play and getting the message through. Nothing gonna harm me in the arms of the Lord my good Shepherd. I listen to His voice and I obey.
Thank you Fr. John
God bless

I can relate. I rejected the Lord once upon a time because He took away
my little boy. But He got me back after all the tantrums and childish
response I showed Him.

Exactly what is going on in my life.. I’ve lost someone (in life) and also i’ve lost myself. Yes, finding myself now. I’ve always known that the LORD is with me.