This reflection on Luke 13:1-9 is for the Third Sunday of Lent.

I almost did a double take reading today’s Gospel. You see, something doesn’t quite add up–at least on first reading. And I’m not talking about the parable of the fig tree–that one is pretty clear, its meaning self-evident and its message quite consoling. Put simply: If we don’t get our act together, we will perish. But God is the gardener who gives us an undeserved second chance and a much-welcomed reprieve. 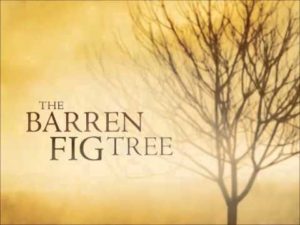 Neat, simple, and reassuring enough for us to get back to business as usual, right? The problem, however, is what comes before that. What our Lord says before the parable is not quite as neat and simple–and certainly not as consoling!

First off, he refers to two apparently notorious tragedies: Pilate’s execution of some Galileans, whose blood he had, out of contempt, mingled with the blood of their sacrifices; and the senseless death of eighteen unnamed people because–of all things–a tower fell on them. Jesus then declares that contrary to what many at that time–and even now–must believe, neither the execution nor the accident means that the victims involved have been great sinners who deserve their suffering.

Here our Lord is challenging a stereotype prevalent among his audience then, as well as today: That the wicked receive their punishment by suffering in this life. In other words, if you happen to be poor, sick, or just plain unlucky, you are merely receiving a much-deserved punishment for your sins. And in case you are a moral person, then your suffering must be punishment for your parents’ sins! It’s a classic case of “Damned if you do, damned if you don’t!”

It’s a belief as stubborn as it is widespread, one that the Bible has tried to correct very early on. Just think of Job: Nowhere is there a more upright man than Job in the land of Ur, we’re told, but no one else seems to have suffered as much as he has–losing his property, his entire family, and his health almost all in one blow.

“So don’t be so quick to judge others,” our Lord seems to remind us. “And don’t be so quick to jump to conclusions about your own life too because the world doesn’t operate quite that simply.” In other words, being moral does not–unfortunately!–always equal success in this life. And the converse is just as true: Being sinful does not–again, unfortunately!–necessarily equal suffering. There is just no easy formula to make sense of suffering in the world. That’s why it’s called a mystery, and that’s why we so often hear such unanswerable questions as: “Why do the wicked prosper?” and “Why do bad things happen to good people?”

These questions express our bewilderment and frustration at the age-old problem of evil, both what theologians call “moral evil” (our sins and the sins of others such as Pilate’s heinous crime against the Galileans) and “physical evil” (disease, death, and casualties such as the accident at Siloam).

But as if to complicate things further, as he sometimes does, the Lord adds: “But I tell you, if you do not repent, you will all perish as they did!”–“they” referring to the victims of Pilate and the tower at Siloam! In other words, if we continue sinning, we will receive punishment! Here is where we readers are permitted to do a collective double take–or a facepalm, if you prefer: Just when we’re almost persuaded to toss out that stereotypical notion, our Lord sounds like he’s putting it back in place!

When we think about it, however, what Jesus does here is nothing new. In the Old Testament, just when Job has virtually spent all his energy complaining to God (yes, complaining!) and trying to wrap his mind around why he has suffered in spite of his innocence, and just when God, speaking majestically out of a whirlwind, has persuaded Job that he’s been using the wrong equation and should simply accept his fate, what does God do? In an unexpected–but happy–reversal, God rewards Job by restoring his health and wealth, complete with a brand new family!

In today’s Gospel reading our Lord Jesus does a similar thing. After declaring in no uncertain terms that those who suffer aren’t necessarily the greater sinners and aren’t being punished for their sins, he virtually reprises God’s act and debunks what he has just declared by warning us of suffering a worse fate if we don’t repent!

You’ve been warned: The question of evil is, after all, a mystery, one with no completely satisfactory answers. What is clear is that it cannot be reduced to a simple formula of karma: “If you do good, you will 100% reap good; if you do evil, you will receive evil.” It simply isn’t always true in this life even though we wish it were so. We need to accept that life is much more complex than that. Maybe the bottomline is that we must try to commit to doing good unconditionally–regardless of what befalls us in this world–and to entrust ourselves to God, who is all-just, but whose last word–as far as we can tell from the words and life of Jesus–is mercy.

Thank you Father for sharing your weekly reflections. I was quite confused after mass last Sunday, as our priest in his reflection of all 3 readings, emphasized that God wants us to prosper. So we simply must work hard and we will prosper. This truly is confusing to me, because there are many who prosper by no honest means, and many work hard and still cannot make ends meet.
I can grasp that it is not about understanding the whys of the ills of this world. And to do good unconditionally is a wonderful mantra to have as I go through each day God gives.

I wish Jesus just said Do GOOD unconditionally. Or maybe, He also meant something else too…like have Hope because our God is merciful, yet just, in the end. 🙂 Still, He could have just said it as His synthesis 😉

Thank you very much for this insightful and relevant explanation. I think that we commit evil in ignorance of the law of divine love and because that God has given us freedom. We also need to listen to his Word and to do good unconditionally – as you say rightly – without requiring thank you and reward. But this is a narrow and difficult path on which we slip often. If everyone tried to follow this path, the evil could be defeated and mankind would live in a wonderful era of peace

Thank you for sharing, Camille! I hope you and Vivian are well! God bless you!

Our lives are a gift. It is up to God what He wants to do with it.
I guess we have to totally let go and let God.

Thank you for sharing, Mercy! This is so true!

In our toxic world of politics people have a tainted picture of politicians, similar to the Pharisees, Saducees and Tax Collectors. What about us who wish to follow Jesus in this world of POLITICS! Doomed as we are, i have learned the secret of the Gospeland the gist of today’s teaching. DO GOOD AT ALL TIMES! Be consistently GOOD! There is hope, pray for us in politics to keep our integrity even if we fail may we give it a GOOD FIGHT FOR WHAT IS RIGTH! PARA DIOS, PATRIA Y PROJIMO!

Thank you, Beng! We need committed and patriotic Christians like you especially in politics! Prayers and blessings!

At one point in my life I declared that I am tired of being “good”. Being tagged as “mabait” was not easy with people around you always expecting me to do the right thing and I made a lot of mistakes. And it was tiring… but then as you said Fr Johnny “…the bottomline is that we must try to commit to doing good unconditionally–regardless of what befalls us in this world–and to entrust ourselves to God, who is all-just, but whose last word–as far as we can tell from the words and life of Jesus–is mercy”

I always have those questions – why do the wicked prosper? Why do bad things happen to good people? The first question i could probably answer using economics and the second is karma. Or introspectively – am i not judging them, the wicked people? Or am i not being boastful if i am to say that i am good? This one puts me in the right perspective – that everything is grace and realizing so that i have to love and do good things unconditionally.

These are good questions to ask one’s self for everyone. Thanks for sharing, Vickie.

So well put. Thank you, Virgie!

Beautiful. Thank you so much.

That kind of commitment to do good unconditionally needs God’s grace too.

“Maybe the point is that we must try to commit to doing good unconditionally–regardless of what befalls us in this world–and to entrust ourselves to God, who is all-just” .. Just what I need to hear today. Thank you.