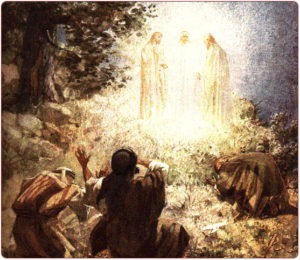 The pre-Easter Jesus was mostly, as Archbishop Alban Goodier puts it, “just Jesus”: An extraordinary preacher and miracle-worker for sure, but human in his every appearance. So can we blame Simon Peter if he gets all excited and carried away? What a rare treat, after all, to behold such an awe-inspiring vision: His Master–for once–enveloped in dazzling light, rubbing elbows with no less than Israel’s greatest prophets, Moses and Elijah. It’s the kind of moment anyone would do anything to prolong, savor, and hang on to. In another era, perhaps Peter would have insisted on a selfie, but here the only thing he can think of is to offer pitching a tent for each one of the VIPs.

Before he knows it though, a cloud overshadows him and his companions, and they hear a voice saying, “This is my chosen Son; listen to him.” And just like that, the vision ends  as abruptly as it has begun, the light and the prophets disappearing so quickly that the visionaries must have wondered if they have just dreamed up the whole episode.

For that one brief, fleeting–and private–moment, Jesus shows his “divine slip,” so to speak, and temporarily suspends what St. Paul in his letter to the Philippians calls the “divine kenosis,” when the Son of God empties himself of his divinity. This kenosis is so complete that as Jesus of Nazareth, even his most moving words and most powerful works never quite furnish a 100% foolproof evidence of his hidden divinity. All throughout his life–and all throughout history, the person of Jesus has always only invited faith, always requiring a choice on the part of believer because at the end of the day, the only thing that distinguishes our believing from our knowing is that our faith always entails a choosing.

Unfortunately for us, such remains the way of the Lord today. He refuses to be “in your face,” preferring to be subtle so that we can remain free in our response of faith. There continue to be occasional transfigurations in the world, when the divine hidden in the most ordinary people and places suddenly shines through, but these surprising moments can be perceived only by those who seek them and by those who strain their eyes to see.

So the question we ought to ask ourselves is: Do we seek the Lord in the everyday and the ordinary? Do we exert enough effort and strain our eyes to see His transfigurations? The truth is, we really don’t stand a chance unless we create enough spaces and silences in our lives to witness this shining through of the divine. This is a real challenge in an era when our minds and hearts are constantly cluttered because every other word we read is potentially a link or a hashtag that leads us some place else.

I don’t know about you, but I need my dose of astonishment. I need to be startled, shaken up, surprised, to be reminded that so much more lies beneath the surface reality of things. It’s too easy to forget! So I need to do everything I can to be alert to God’s transfigurations. And if and when I get them, I want to be able to savor them and hang on to them.

The good news is that even when we don’t do our part, God does His. When we fail to seek Him out, He leaves no stone unturned in finding us. Even if we don’t strain our eyes to discern His presence, He unfailingly keeps his eyes firmly trained on us. Which brings me to that other vision of light in the First Reading.

This time the visionary is Abram–before he decides to call himself Abraham. Whereas Peter’s religious experience is sublime, Abram’s vision, which involves animal slaughter and pots and pans, is–to us contemporary readers–downright bizarre and maybe precisely because of that, no less startling. First of all, Yahweh asks Abram to offer a sacrifice of several very specific birds and animals: a turtledove, a young pigeon, a three-year-old heifer, a three-year-old she-goat, and a three-year-old ram. Then he is instructed to butcher the animals, cutting them in half from top to bottom and position each half opposite each other. Then Abram is told to wait.

At sunset, a smoking fire pot and flaming torch–a symbol for Yahweh Himself–appear out of nowhere and pass between the pieces of animal carcass. It’s an astonishing sight, but what biblical scholars say it means is even more astonishing: Yahweh is making a bold promise that He will always keep His covenant with Israel. His passing between the animal halves is His way of saying: “If I don’t keep my word, may I be split in half from head to foot in the very same way these animals have been cut in half!”

Such is the astonishing fidelity of our God, a God willing to have Himself broken and split in half if He does not keep His word. Such is his faithful love for us. But this season of Lent, we know that God’s faithfulness is so much more. We know that his love has broken every record. All we need to do is gaze at His son on the cross to know the astonishing truth–that God has gone way beyond the terms of this original covenant with His people. He has allowed Himself to be broken and split in half not because He has not kept His word, but because we have not kept ours.

And that, my brothers and sisters, is the startling truth of Lent.

I don’t know about you, but this is one dose of astonishment I’m going to savor and hang on to it this Lent.

8 replies on “A DOSE OF ASTONISHMENT”

Father J, I stumbled upon your homily through FB and I am so glad that I did. It’s very relatable and it motivated me to reflect on a recent heartbreaking realisation which turned out to be a moment of astonishment. God in all things (and situations), indeed – even in those that are difficult to accept. Thank you very much for being a blessing, Father J! I’ll make sure to read your next homilies. God bless you!

Sometimes, the trick to being astonished is to astonish someone else first.

Thank You for the astonishing example of what it means to give beyond expectation, to love even if it hurts, to be selfless in many endeavours. There are moments in my life when I fall victim to the thought of ‘What do I get in return for doing these good deeds?’

Lord, guide me in remembering that You grant me everything I need. Keep in my mind the wisdom that Your blessings overflow each day. I know I can serve because You equip me to do so and give because You offer me so much. May the things that I do lead others to see the amazing inspiration that You provide. May others also find the marvellous things that You do for them.

Beautiful prayer. Thank you very much for sharing. I will pray this as well. Thank you.

Wordless sighs of astonishment, awe and gratitude for God’s relentless love and fidelity. (Fidelity is such a gorgeous, no?)

We are loved beyond all telling! Thanks for the remind, Fr J!

A dose of astonishment for us: God keeps his promise even when we don’t. Is my reading correct, Father J? God is our Father. He loves us even when we cause him so much pain.

Dear Fr Johnny,
I am awe=stricken and humbled. The homily has inspired me to
hire a good man who is now 50 years old but does not know how
to read. It is a long story but I will keep you posted on what happens.