This reflection was prompted by the Sunday Gospel reading (Luke 1:1-4; 4:14-21) addressed to Theophilus (which means “Lover of God”and also “Beloved by God”) .

2018 was the year I lost two friends from high school, virtually one after the other. As in the case of most high school friends, we’ve lost touch over the years for different reasons—one because he moved to California many years ago, the other because he switched religion and maybe decided to keep away.

Clearly, they weren’t the kind of high school friends that one made sure to keep in touch with by hook or by crook; otherwise I or they would have. But as it happens, in this aftermath of their sudden deaths I realize now, albeit too late, they were, by every definition, “good friends”—friends without whom those highly uncertain and occasionally turbulent years in high school would have been unbearable.

I’m embarrassed to admit that when the news of their deaths reached me last year, I was far too busy to let the significance of their passing get to me. I was also traveling both times, and something about not attending a wake makes a death seem less real, right?

But now I find myself in a moment of particular silence and recollection, and I’m drawn to think about these two long-lost friends and how their lives have made a difference in mine.

Let’s call the first friend Dario. I met him in first year high school, and he taught me what seemed to me then the esoteric science of using the Metro Manila public transportation system. He also took me to my first eye doctor because I had been seriously myopic for years, but never got around to getting prescription glasses.

Dario was the class clown who didn’t mind playing the fool, and we were more than eager to assign him that role partially out of  fear that one of us would be relegated to it instead. I knew then and realize now that he was never really taken seriously by most people. Even then I suspected that the class laughed at him and not so much with him—but he didn’t seem to mind.

It didn’t help that Dario waged a long drawn-out battle with acne. He was cruelly teased about it, among other things, and though he persistently scouted around for the right medication, he never found a permanent cure, even way past puberty.

For many reasons, Dario was an easy target for bullying. But he just laughed it off, and his was just the kind of loud, infectious laughter that could drown out and conceal any underlying broken-heartedness.

However, when it came to partying, Dario was, hands down, one of the go-to persons in our class. He was far from your stereotype of a party animal. He wasn’t popular with the girls or the boys, blessed with neither good looks nor athletic prowess. But he had the skill and the confidence to do the one thing that seemed so essential to high school partying in those days, something that so many of us couldn’t do: Dance.

Dario offered free dance lessons to anyone who had the nerve to ask him. One desperate week before the very first soiree of my life, a few of us asked him for help, and he readily agreed.

Dario had every sort of fancy names for the moves he taught us. “This,” he would announce before a demo, “is the Shotgun Shuffle.” “And this is what’s called the L.A. Walk,” he would explain before proceeding to demonstrate dance steps that, to us novices, looked nothing different from the previous ones.

I’ve long forgotten the moves he taught us that Saturday afternoon. What I will never forget is the painful awkwardness I felt, the self-conscious efforts to move in rhythm and to the silent mechanical “1-2-shuffle, 1-2-shuffle.” But Dario gave us those dance lessons as if it was no big deal and he provided us, awkward adolescent boys, what we didn’t know we needed at the time: the beginnings of a confidence to live in our own skin.

I couldn’t help but marvel at where he himself got his confidence considering all that he had to deal with back then. But now I think I know: It was a place called Pain, for isn’t that precisely where many of us have eventually managed to find our own inner resources?

We parted ways after high school: Dario went to a university in a different part of the city, and he never attended any of our reunions. It’s strange but also telling that neither of us ever tried to reach out to the other. Last I heard, he had become a fairly successful born-again Christian pastor.

I never saw Dario again in person or even on Facebook. I never heard or thought of him again, and I never missed him—until I received news of his death last year. Even in the midst of things, the significance and sadness of that moment began surfacing, but all that was drowned out too quickly by the frenzy of my daily routines.

As I write this, I feel a strong need to deal with how I feel about him now that he’s gone. I’m hoping it’s not too late to think of him and to thank him. His life needs to be acknowledged, the space and time he inhabited for the span of his lifetime and the difference he made in mine–even if sadly, I’m doing it only now, months after his death.

I lost my friend Dario to life years before I lost him last year to death. Friendships are funny affairs: They come in every possible shape, size, and color. There are those that you seek and nurse, no matter what.  And then there are those that just fall on your lap and fall away. But these friendships turn out to be no less important, no less life-altering.

Though I knew Dario, only for a few years in my life, I am thankful that he was there when I needed a friend exactly like him.  More and more I’ve come to believe that the friends we make along the way, especially those we needed at those precise stages in our lives, are God’s way of telling us that we are His beloved.

My iPhone has a playlist of music from the much-detested disco era, but those songs, for better or for worse, do make up the soundtrack of my high school life. Every once in a while, sometimes at the least expected moments, I hear the Hues Corporation’s “Rock the Boat” or the Silver Convention’s “Fly, Robin, Fly,”  and almost always, without fail, I grin in spite of myself. 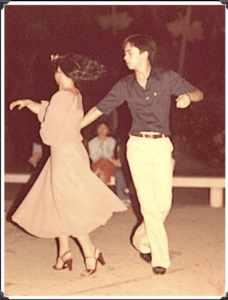 But the next time the songs from that era play on my iPhone, I should stop and remember that skinny high school kid who braved and crossed the dance floor for the very first time to ask a girl for a dance. He couldn’t have done it without his friend Dario, who–he was certain then–was cheering him on from across the room, half-hidden in the blinking lights.

11 replies on “BELOVED BY GOD (LONG-LOST FRIENDS – PART ONE)”

You still remember the name of this girl you’re dancing with Fr. Johnny? ☺☺☺

Great! I wonder who she is 🙂 Alvin Ong here by the way…BSME ’83. Best regards to you Fr. Johnny!

So beautiful! Reminds me of our 14 classmates who have already passed away. And as we will have a reunion this Wednesday, it is a reminder that we are all truly blessed!

Fr. Johnny, you look so graceful on the dance floor!

Thank you for this. I lost my best friend in our HS class late last year. Our whole class felt the loss for Rene was well loved. His lingering illness provided us his classmates opportunities to bond as we made trips to visit him in Pampanga. His death brought us even closer. His death brought to our consciousness our own mortality and how precious each one is. Thanks to Rene, we have become brothers to one another.

Last year my sister died and I never get to see her because she’s abroad. It’s really difficult. But amidst all this, thank you for the reminder that I’m blessed and loved because of the gift a wonderful sister.

This struck a chord, Fr. Johnny. Thank you.

I pray you are better today, Fr. Johnny….and though delayed, thank you so much for appearing today….helps enrich my day!

Thanks Fr J for this insightful reflection. It will help me handle the deaths of friends and family far and near. I am in the pre- departure age.