This reflection is based on Mark 9:38-48. was written in 2015. I am reposting this because Pope Francis needs our prayers as he faces vicious attacks even from within the Church.

I’m reading the new book from Filipino priest-poet, Fr. Albert Alejo, SJ, Nabighani. It’s a lovely book of religious poetry translated into Filipino and guaranteed to make you fall in love all over again with our language. One of its gems that immediately caught my eye was a little-known piece entitled “Upang Ako’y Ngumiti sa Buo Kong Buhay” (“That I May Smile All My Life”), a prayer written by a Jorge Mario Bergoglio on the day of his ordination on December 13, 1969.

Jorge Mario Bergoglio is, of course, Pope Francis, who, as of this writing, is capturing the hearts of millions in the United States, both Catholics and non-Catholics. Last Thursday, our community gathered for our very own Pope Watch at 6 am to watch the Holy Father’s historic address to a joint session of the US Congress. Just as in Capitol Hill that morning, eyes were welling up around the room as we munched on Egg Macmuffins and Voodoo Doughnuts. Pope Francis has done it again: Through his words and mere presence, he has elicited those inexplicable tears.

But this Pope also has a special gift for making you smile in spite of yourself. After all, doesn’t he have the most infectious of smiles? With a smile that New York Times columnist Timothy Egan has described as “just shy of goofy,” the Holy Father has been lighting up just about every place he visits–be it the hallowed halls of Congress or the United Nations, the sacred spaces of churches and cathedrals, the cluttered classroom of an inner-city classroom in East Harlem, or the secular streets of Manhattan. One can’t help but marvel at how God has indeed granted his prayer at ordination: To smile all the days of his life.

And so it comes as a surprise to hear the remarks of his long-time friend, Enrique Gallini, about how this man had not really smiled a lot before he became Pope. In fact, recounted Enrique, his friend Jorge would smile only when they discussed football and his team, the San Lorenzo! Likewise, those who knew the Cardinal of Buenos Aires describe him as rather serious and somber and are uniformly surprised that now everywhere they turn, they see the beaming face of Bergoglio/Pope Francis.

Reading Fr. Alejo’s translation of his prayer at ordination, I can’t help but wonder why it had taken so long for the man to find this smile–a smile that, according to America Magazine, “has traveled all around the world.” But Pope Francis himself provides some kind of explanation when he describes his feelings upon his election as Pope. The fear that immediately overcame him was, in prayer, replaced permanently by a deep calm and peace, based on an appreciation of this most unexpected of missions. It is this faith that he is doing what the Lord wants him to do that enables him to smile so openly and so infectiously.

Pope Francis’ smile is as open as the Church that he dreams of: Not the fortress that keeps its doors locked to leave out sinners and the undesirables, but the field hospital that offers healing to every person, especially those in greatest need of it. In every single one of his messages, always delivered in humility, Pope Francis invites us to fling open the doors of our hearts so that it excludes absolutely no one–not the poor, not the foreigner, not the condemned convict, not the divorced, not the homosexual, not the elderly, not the unborn child, and not our voiceless Mother Earth.

This inclusiveness was evident when he spoke spontaneously to the crowd from the Capitol Hill balcony after his address to the Congress: “I’m so grateful for your presence here. I ask you all please to pray for me and if there are among you who do not believe or who cannot pray, I ask you please to send good wishes my way.” That simple statement made all the difference because through it, Pope Francis made even the non-believers feel that they too belong.

Both the First Reading and the Gospel correct the natural human tendency to exclude others. When Moses is told that others are prophesying, he does not condemn them in jealousy, but expresses his wish “that all may prophesy in the Lord’s name!” When our Lord Jesus is told that someone who is not one of theirs is casting out demons in his name, our Lord tells them to let the man continue his work. Today the invitation God extends to us is an invitation to inclusiveness.

May the Holy Father’s example–his message and his smile–move us to fling open the doors of our hearts as widely as we can, so that we too may smile as openly and as widely all the days of our life. 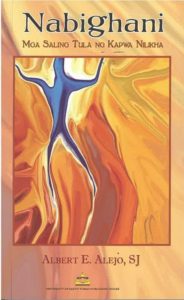 Here is an excerpt of Fr. Alejo’s translation of Pope Francis’ prayer at his priestly ordination 46 years ago. It tells us the source of his lifetime smile (Translation into English, albeit inadequate, mine):

I believe in God the Father
Who loves me
as a son,
and in Jesus the Lord
who pours upon me His Holy Spirit
that I may smile all my life
and arrive smiling someday
in the Kingdom of life without end.

Let us pray for the Holy Father that no trial or trouble will stop him from flashing that radiant smile to the world.

10 replies on “SMILING ALL THE DAYS OF OUR LIVES”

Thanks Fr. J for this wonderful reflection. I suspect some of our brothers are angry with the Pope for some pronouncements which they do not agree with. I was so shocked when my classmate in HS who is a Marian devotee sent me a horrible article about the Pope (“When will Catholics wake up and see the mess Pope Francis has made?”) calling him a heretic, false pope. She says there are many negative articles about him in the U-Tube from Catholics in America. In one article he is called the anti christ. Terrible. All the more we have to pray for our Church and Pope Francis.

The smile of Pope Francis is inspiring people to See Miracles In Life Everyday (S.M.I.L.E.). I fervently pray for the good health of our Pope Francis and for all of us to be inclusive in our prayers. Thank you for sharing this gospel and homily today. I really need a beautiful smile today.

To be truly believing I am doing God’s will…..’that brings a smile to my face, blossoming from the joy in my heart.

Thank you for this! Yes, indeed, it is a blessing and a inspiration to have our Holy Father Pope Francis sharing God’s message (our own calling too) to the world!

Thank you for sharing the prayer. Through God’s grace, may we also bring our own smile to our small spot in the world!

I hope that I can serve as a safe harbor to the different people around me, a venue where they will feel accepted and appreciated. I pray that I will have the wisdom to see the reason why a person, regardless of who he is, comes my way. I hope to understand why I am given the opportunity to interact with him in order to have gratitude for his presence.

Lord, continue to teach me how to influence my students to be welcoming of others. May my presence draw them into You and may their presence draw every person that they connect with to You. Blessed my students so that they will be a blessing others.

Verdad! Once God annoints us for the mission we can’t help but smile even if 500 attack and burn our City! Jesus is in Command! ( that’s my nephew in the first Photo Lorenzo Trinidad Garcia touched by the Pope Francis siya ay nag halik sa kamay nang Papa ugaling respeto nang Pinoy)