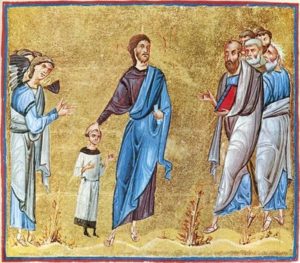 I wonder how the disciples must have felt when our Lord caught them discussing a somewhat embarrassing topic. On their way to Capernaum, our Lord noticed how engaging and perhaps even heated the disciples’ discussion was getting. So when they reached their destination, it was only natural that Jesus ask them what their argument was all about.

It may have taken a while before one of the disciples finally confessed: They had been debating who among them was the greatest. Imagine how Jesus must have felt. He must have been really disappointed with them–especially since he had just been telling them about his upcoming Passion and Death.

Whatever our Lord felt, he proceeded to throw them a most radical challenge:

“If anyone wishes to be first,
he shall be the last of all and the servant of all.”

One can’t help but wonder: Why go to such extremes? Why insist on taking the last place of all and to becoming the servant of all in order to be first? One is reminded of St. Ignatius of Loyola’s so-called “Third Degree of Humility,” where the mystic invites us to pray not for the grace of mere humility, but the actual experience of humiliation and insults out of our love for Christ and our desire to imitate him. As St. Ignatius puts it in his Spiritual Exercises:

It is not such a novel thing because this is, in a sense, what Christ himself does by himself “taking the form of a slave”–in fact, dying the death of the worst form of criminals (Philippians 2:7).

Perhaps this insistence on such extreme humility is rooted in the knowledge that it is pride that is truly the source of all sins. Maybe most of us are not the type to exalt ourselves, but pride has a more subtle and, therefore, insidious form: self-entitlement. When we feel that we deserve something, or that we have earned a “right” to something, that is the self-entitlement. This is exactly what the serpent took advantage of when it tempted Adam and Eve to partake of the forbidden fruit: They will become like God! Adam and Eve, in spite of themselves, felt that they were entitled to become like God. Pride and self-entitlement make up the original sin.

The late Dan Harrington, an eminent biblical scholar, goes further: He claims that this pride, this sense of self-entitlement, is even more primordial than the human race. It is the sin of the serpent. If you recall, before Eve, God asked Adam to name the different creatures, and after naming all of them, Adam, we are told, found no suitable partner, prompting God to pull out Adam’s rib during his sleep and fashioning Eve out of this rib. According to Fr. Harrington, the serpent, which the Book of Genesis tells us, was the cleverest of all creatures, may have resented not having been considered suitable enough a partner for Adam. Hence, its resentment and its scheme to deceive humanity. Again, the seed of its evil deeds is pride and self-entitlement.

Pride may be far more insidious and subtle than we suspect. It is probably for this reason that our Lord challenges us not to settle for anything less extreme–i.e., to take the last place and to become the servant of all. It is something that he himself actually does in his life.

The question we ask ourselves today is whether or not we are up to this challenge. If so, in what small and concrete ways can we begin?

6 replies on “THE SIN OF THE SERPENT”

Yesterday, as I was serving in a community, without being aware of it, pride was insidiously taking a foothold in my heart. It passed, by grace. Today, being confronted by today’s gospel and challenge I saw it for what it was. Pride so subtly taking over…..oh Lord, I beg for the grace to be always aware when pride rears it’s ugly head and to be able to lift my heart to you in grateful humility. Amen.

I am deaf. Unless I wear my hearing aids, all conversations are in whispers. So I get sidelined during our table conversations. I am aware that my sense of being ignored is a cry for entitlement. This is what I do. I hurry my meal, I leave the table ASAP, and busy myself with other things. In a way, I ignore them back. I know, this isn’t the way to dismantle my self entitlement. It!s hard to begin.

Praying for strength for you!

It is Monday, and I was griping inwardly this morning — having to wade through flood water yesterday night,now going to work, and figuring out how to make my budget last until the next payday. I was thinking, “I deserve better than all these”.

Then I read this reflection.

I guess everyone does deserve flood-free streets and having enough to live on. But the reality is, not all of us have that. I don’t have that right now. But I guess this reflection reminded me that right now, this is where God placed me. I am just a mere speck in the hordes of the working class, but perhaps God wants me to do something — be of service — while I’m here.

And perhaps, maybe, God will bless me with a better situation in the future. I’ll work hard for that too. But for today, I’ll try to treat every situation as a potential for grace.

Thank you po for this reflection, Fr. J. Thank you for the reminder to be good-natured despite the situation — to work towards being “a fool for Christ” rather than griping and complaining, trying to compare myself with the standards of the world.

Ouch! That’s my sin. And how right you are: it is insidious. You and Fr. Harrington say it is primordial – that explains why it is my first reaction in many daily situations – this sense of entitlement. It is a difficult and lifelong struggle, for sure.

So your final question is a difficult one: how to begin?