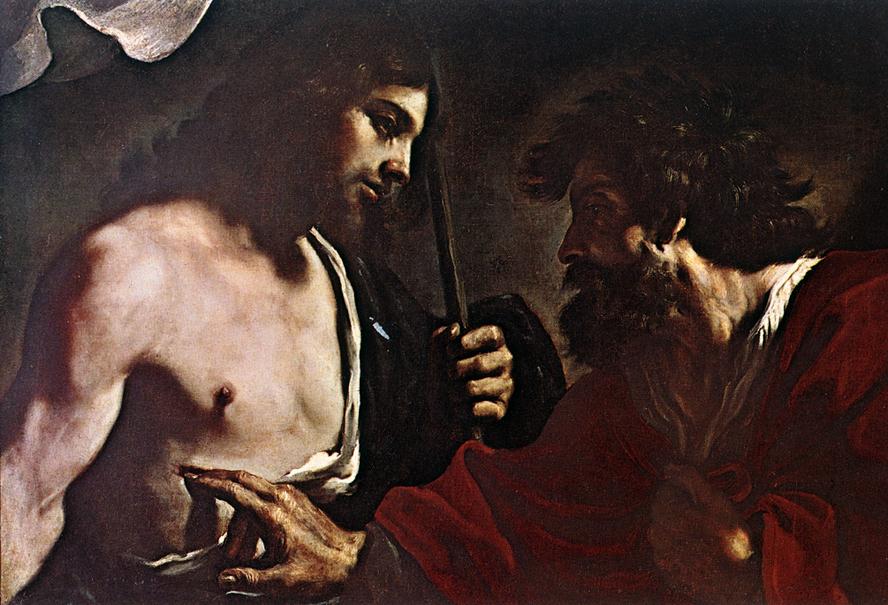 It’s a well-known story. Thomas misses out on Jesus’ debut appearance to the disciples and hears them make the far-fetched claim that they “have seen the Lord!” It’s not the first time such a claim has been made: There are the women, those early Sunday morning visitors at the tomb probably with still too much tears and sleep in their eyes, and that couple back from Emmaus with tales of mysterious strangers and holy fire in their hearts!

Always the cautious one, Thomas must have shaken his head sympathetically. The illusions that broken hearts sometimes need to cling to in order to survive their tragedies! He has tried to be patient and understanding, but now, with all of the eleven disciplines joining in the madness, it’s time to put a stop to this mass hallucination! What everyone needs is a healthy dose of reality.

So he tells them:

“Unless I see the mark of the nails in his hands
and put my finger into the nail marks
and put my hand into his side, I will not believe.”

In saying this, Thomas has set what he considers an impossible condition for his belief. Note that to date, all the alleged sightings of the Lord have been just that: sightings. The most the Lord has done is show the eleven his hands and feet, but so far, no one has touched him.

The problem is, the next time the Risen Lord makes his appearance, he makes it a point to call Thomas’ bluff. He invites Thomas precisely to put his hands on the Lord’s wounds, leading to his conversion and often-quoted profession of faith: “My Lord and my God!”

So what could be the Gospel message for us today? For me, the Gospel characteristically leaves a question in its aftermath, a question that we can use to examine ourselves and our faith. That question is: If Thomas’ condition for believing and following the Lord was to see and physically touch the wounds of the Lord, what is your condition? In other words, if Thomas told the disciples that unless he “put his finger into the wounds of Christ,” he would refuse to believe, what is your “unless?”

We all probably already believe in the Lord, otherwise you wouldn’t be reading this. But we all could improve in the way we follow Jesus, and maybe we too, like Thomas, have at least unconsciously set a condition, a condition that actually serves as a deterrent or obstacle to our discipleship.

Some of us may have been praying for a particular thing, which has not been granted despite all our prayers. It is possible that though we don’t actually say so in our prayer, we have tacitly set a condition that our prayer be granted before we will exert greater effort in our spiritual life.

Or perhaps we have been hurt or offended grievously by someone, and for us unconsciously, unless the Lord gives that person a much-deserved lesson (or punishment!), we won’t be so eager about God?

Does your faith have an “unless?” Have you set conditions for believing and following the Risen Lord? In other words, what will it take for you to believe and follow Jesus? Although the Lord has been known to surprise people and call their bluff, as he has done for Thomas, you may want to consider surprising the Lord–and yourself–by dropping that condition.

I listened to the Cardinal last Sunday and his question was
“Have you seen the Lord?”. He wove on the simplicity of the resurrection. Our Lord was mistaken for a gardener, a suspect, walked like any normal traveller, built a fire etc. The invitation is to see the extraordinary in ordinary things.

We have no reason to be bored.

I have no unless. I believe, unconditionally, in One God, All-Knowing, All-Good, Omnipotent and All-Forgiving. He is everything that I could never be, and I commend myself to Him. Every time I feel I have reached the end of my rope, I simply pray to Him to do with me as He pleases. And to those who would misinterpret my words to mean that I have led or am living an exemplary life of piety, you are gravely mistaken.

Your reflection opened my eyes to my “unless”.
I have been praying to God to find me a community that i can be part of, with a condition that i do not want to be a parish volunteer because i have negative notions about it.
Before your homily, i wasn’t even aware that i was dictating on God, as if i know better than Him on what is truly good for me.
Thank u Fr. J

Hi Fr. My sister Moe Geronimo has directed me on your site for the Lenten retreat and since then have been following your blog. Thank you for this insightful message and it is a good reflection on what conditions we set in our faith.
Also, hoping next year you can have your retreat made via podcast. Also letting you know that all my sisters have tuned in to your retreat (both online and at Mary the Queen).
God bless.

Thank you for your kind words and suggestion about next year’s retreat. Will think about it. Say hello to your sisters. 🙂

Thank you Fr. Johnny for a beautiful homily I pray that I will not be using unless in my faith and honour Lord Jesus as He should be honoured. God bless

We should all pray for the same grace. Thank you for your sharing!

Thanks Fr. J! Just like Thomas, I (being a chemist)have a tendency to look for proof. I remember a Jesuit priest once asked me… why do you put GOD under a microscope? This reflection of yours is a reminder.

Thanks for your sharing. To look for evidence is an understandable modern habit and temptation, which, however, is inapplicable to spiritual matters. 🙂

Thank you – especially for questions. For in the questions, we find our Lord – speaking individually to each heart, mine included!

Hello, Rose! Absolutely! Our questions are our private personal doors to deeper faith.

Please continue sending me blogs/emails with spiritual messages. I find this medium as a preferred source of knowledge for my spiritual growth in addition to readings of printed materials. I wish all the people behind the Pins of Light success and blessings of God.

Your reflections on today’s Gospel hit a core in me…what is your unless? Yes, indeed my faith has unless like Thomas…

Thank you so much Fr. J. I have been following your on line lenten retreats for 3 years now…

Thank you for sharing and for being a faithful online retreatant!