This homily for the First Sunday of Lent is based onb Mark 1:12-15.

It’s the shortest version of three Gospel accounts about an important event in the life of the Lord at the beginning of his public ministry. While those of Matthew and Luke detail three specific temptations that Satan offers to Jesus, this account of Mark tell us only that he was tempted in the desert for forty days. 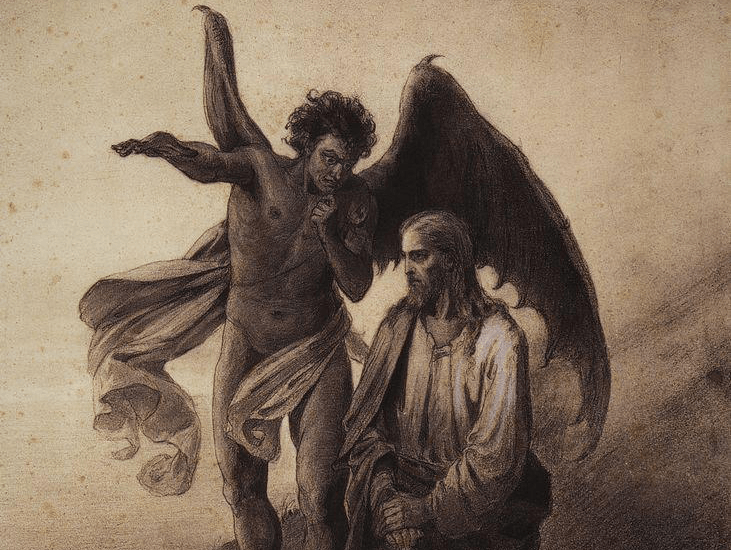 If we just skim through the reading, we would probably say to ourselves, “Oh yes, I know this story. Nice.” But there is a paradox often overlooked in this story, a paradox that can shed light not only on what actually happened here, but also what happens to us in our own lives.

We believe that Jesus as the Son of God is himself all-holy, and his nature, like his Father’s, is against everything evil. Jesus is, therefore, completely incapable of committing any sin. If this is true, does this whole business of the temptation in the desert even make sense?

I mean, if there was, in principle, absolutely no possibility of the Lord falling into temptation, what actually went on in this episode in his life? Was it just some kind of charade? Was the whole thing just for show?

We have a similarly mystifying passage in the letter to the Hebrews when the writer tells us that Jesus has been “tempted like us in all things, except sin” (Hebrews 4:15). Can our Lord, who is incapable of sin, really experience temptation?

This question calls our attention to the different modes of temptation that the devil engages in. We are most familiar with the most common—and obvious—temptation: the choice between good and evil. We know that temptations can lead us to sin.  If this is all the tempting that the devil can do, then we have to say that Jesus is invincible to such tempting precisely because he is incapable of sin.

But there is another, more subtle,  kind of temptation, which the devil also engages in and which many more of us fall for precisely because it is more subtle: the choice between what’s good and what only seems good. St. Ignatius Loyola, in his Rules for the Discernment of Spirits, warns us that for those who are more spiritually mature, the evil spirit changes its tactics. It knows that the more spiritually advanced would not easily fall for the usual, blatant temptations. But they might just fall for what is apparently good, but actually isn’t.

There’s absolutely nothing sinful about turning stone into bread, and isn’t satisfying your hunger and taking care of your health a good thing? It would seem so, but if your goal is to fast for forty days in the desert in order to enter into deep prayer, then it is really the lesser good. The Lord detected this, and refused to fall for it.

There’s also nothing wrong with jumping off the top of the temple and get the angels to come to your rescue in full view of the public. The instant conversion of thousands who witness such an awesome miracle is a good thing, isn’t it? Again, it certainly would seem that way, but if the Father’s Will is for you to invite people to make a free decision about following your message about the Kingdom, it would certainly be the lesser good. Again, Jesus recognized this, and resisted this seemingly innocuous temptation.

It is only in the last temptation, when the devil grows desperate, that he tries to pull off an impossible temptation—i.e., a temptation where Jesus is asked to choose between what’s good and what’s evil. Here Jesus is offered all the kingdom in the world if he worships the devil. Obviously this is something the Lord would never fall for, and he does not mince his words about this.

As we enter into this holy season of Lent, the Church invites us to examine our sins and to repent from it. But we are also asked to ask ourselves how we can grow in our spiritual lives? One way of going about it is to examine the kind of temptations that the evil spirit subjects us to. Keep in mind that it tempts us not only to choose the bad, but also—more often than not—to choose what is only apparently good. We may not actually commit a sin when we fall for this second type of temptation, but we end up doing the lesser good.

And that’s already good enough for the devil.

“Doing the lesser good is good enough for the devil.” I’m scared to know how I’m doing. How often have I succumbed to temptation? Dear Lord, deliver me from temptations.

In the third line of the sixth paragraph it should have read “subtle” not “sublet” – a minor typographical error.

Often enough our fall into sin is because of our choice of what ‘appears’ to be good as when we say ‘akala ko kasi’. That is the subtlest form of temptation when we take the apparent good as the real good. It is an error of judgment.Let us pray for the grace of enlightenment when we are confronted with choices. The options are not always a clear divide between good and evil; many times it is between what is good and what seems good.

this is a good one. thanks father. true, this is the time to discern at how the devil tempts us at our weakest point where we might be tempted to think it is not so bad after all.

Fr. Johnny, I don’t receive Pins of Light thru my email anymore. I am 74 and not a techie….I just stumbled on this in FB. How do I share/forward this to my friends who do not have FB accounts…thank you Fr.

Apologies. I was traveling. Email to be resumed today 🙂