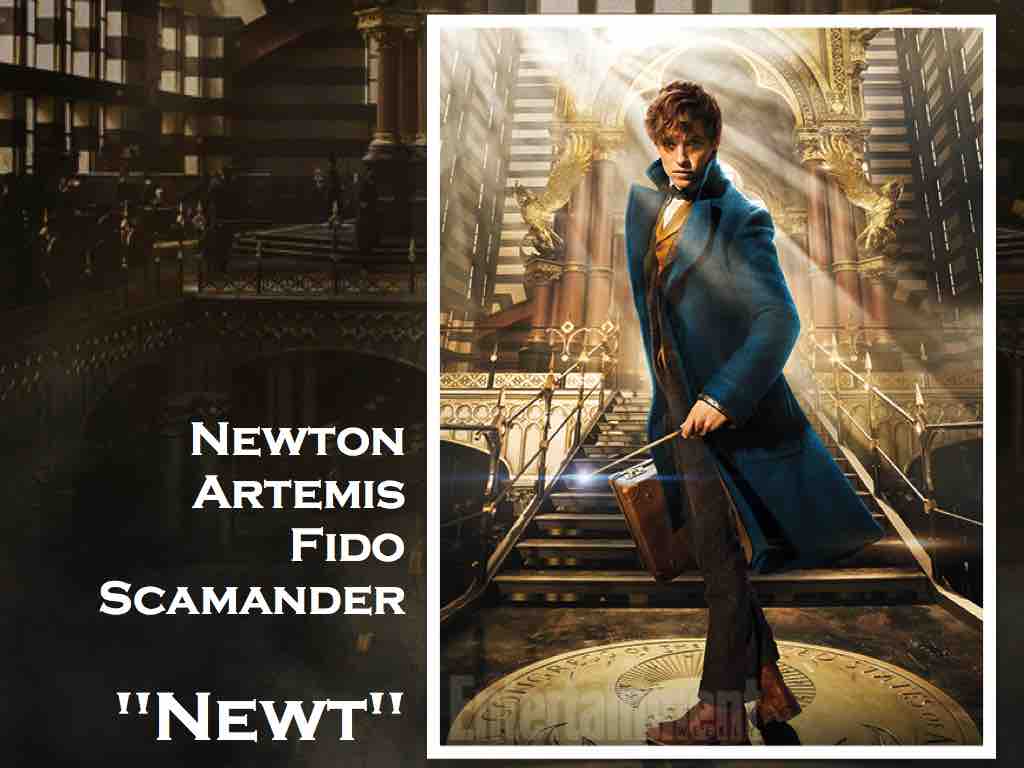 The suitcase is strange from the first instance we see it: It shakes and growls as though something fierce and wild is trying to get out of it. Indeed we soon find out that the suitcase is full of fantastic beasts, the likes of which we’ve never seen. Even more, there’s an entire strange new world inside the suitcase that Newt and his friends are able to step into. As it turns out, the world in the suitcase is a sanctuary for these fantastic beasts, where they can roam free and safe.

Three of these fantastic beasts stand out for me.

The first is the Niffler, a treasure-hunting creature with a long snout that resembles a mole and a duck-billed platypus. Fast and agile, it’s always hunting for shiny objects like coins and jewelry and stores them in its ever-expandable stomach pouch.

The second of these creatures is called a Bowtruckle, a small, peaceful painfully shy bug-eater that looks like a stick bug. It’s a guardian of trees whose wood are used to make wizard’s wands. It also tends to have abandonment issues. 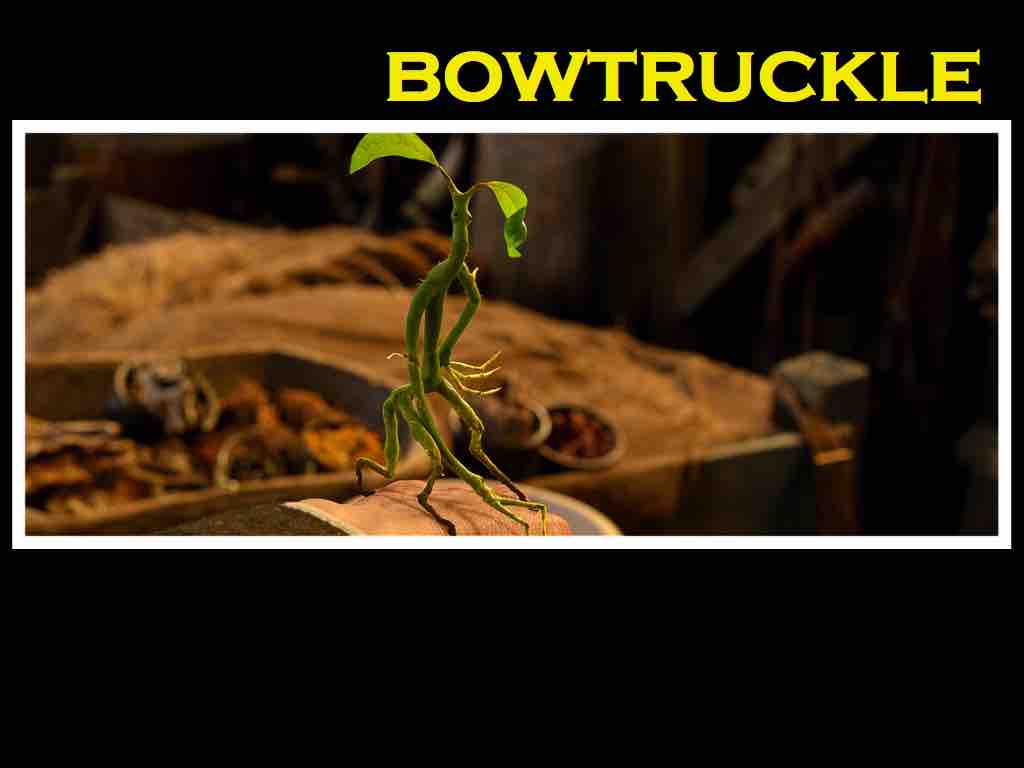 Last but certainly not the least is the Thunderbird, a magnificent multi-tailed, multi-winged gold-and-white eagle that can create a storm by flapping its wings. Native to the wilds of Arizona, it also has the uncanny ability to sense lurking danger. 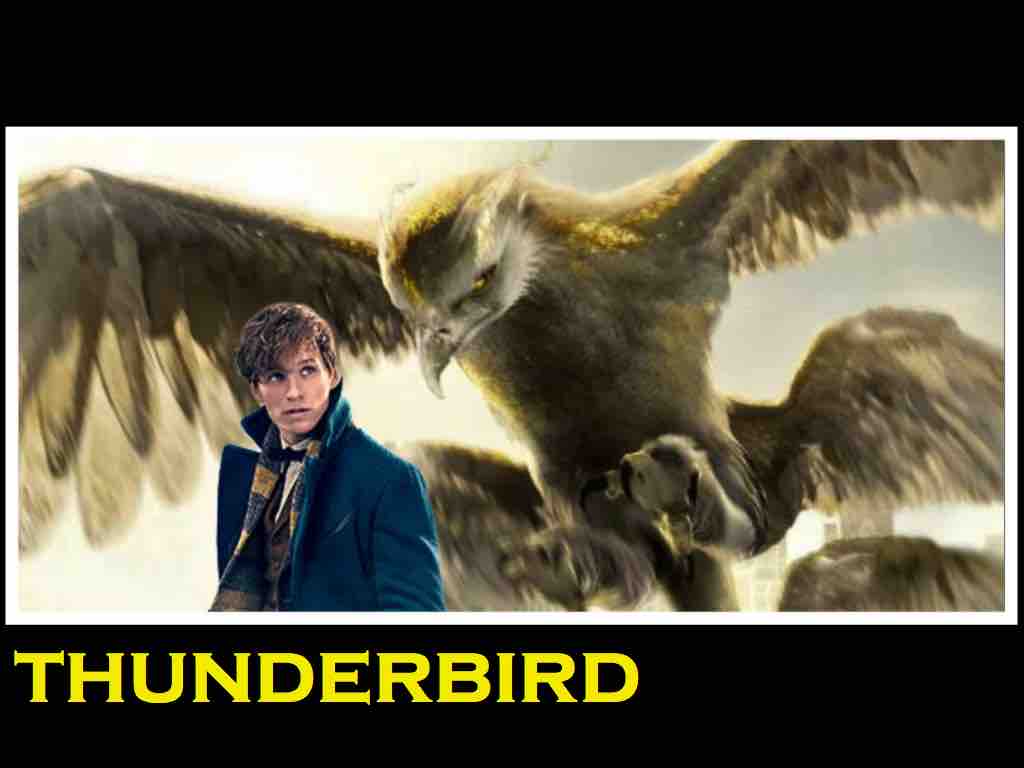 I really enjoyed the story that involved these three fantastic beasts in different ways, but it struck me that they could very well offer us a valuable lesson about ourselves on this Feast of the Immaculate Conception. Isn’t it the case that like the wizard Newt, we each carry with us a whole mysterious world in a suitcase–our inner world, our selves? And isn’t it the case that these inner worlds are also in their own way inhabited by fantastic beasts?

The three fantastic beasts I mentioned, in fact, can very well represent three of our most powerful passions–passions that define us as human, without which we become less human, but also passions that can, like the beasts in the film, run wild and get out of hand?

The treasure-hunting Niffler, for instance, can stand for our passion to HAVE, an instinct for material and social security that is essential to being human, but one that can quickly deterioriate into a lifestyle of hoarding rather than mere receiving. The painfully shy Bowtruckle can represent our passion to CONNECT, our basic need to relate with others, but if allowed to run wild, may morph into an unhealthy addiction and attachment to others. Finally, the Thunderbird can symbolize every person’s very normal need to SOAR, to make a difference in our lives and in the world, but not through service, but rather by showing off.

It would profit each of us to pause a while and peek into the world of fantastic beasts we carry around like a suitcase. Are any of the fantastic beasts within out of control? Are any of our powerful passions running wild? Have our passions lapsed into hoarding, attaching, and showing off? 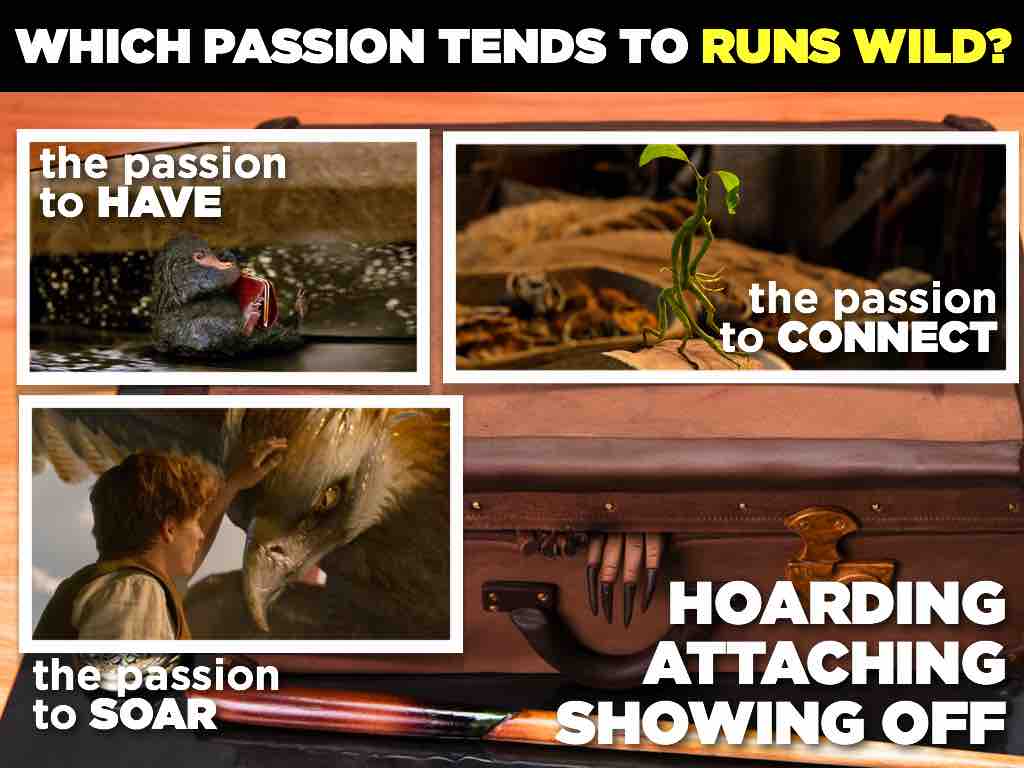 Today is the Feast of the Immaculate Conception, where our Blessed Mother is presented to us as a person who has been given by our Lord Jesus the gift of redemption ahead of time: We believe that as a result, she is free from original sin. What does that mean? Today I wonder: If I stepped into Mary’s suitcase, what would I find? Would her inner world be marked by an absence of the passions I described? Would that inner world be bereft of fantastic beasts? 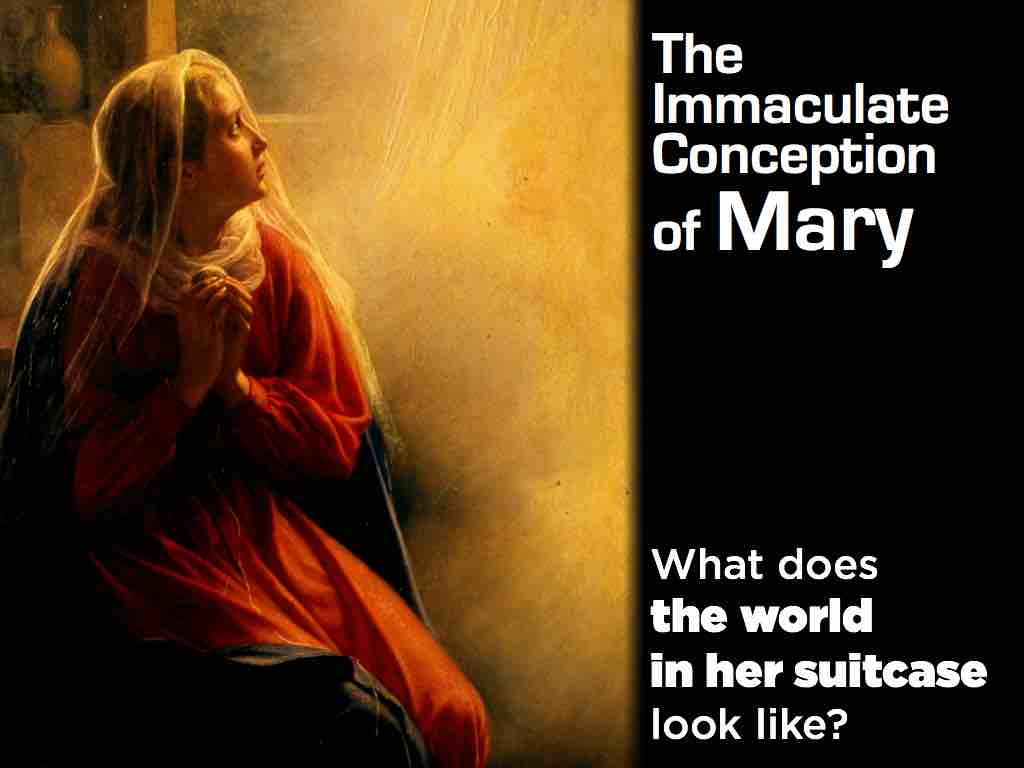 I think not. I think like our suitcases, Mary’s too would be swarming with fantastic beasts. To lack any of the passions is to be less human. Perhaps the gift of the Immaculate Conception means the selfsame fantastic beasts inhabit her inner world, and the selfsame passions run powerfully within her–except that unlike ours, they have been tamed.

Like us, Mary had the passion to HAVE, but her stance was not so much to hoard, but to receive whatever God offered her as gift. She was ruled by gratitude and not by greed, as sometimes our passion for having can lead to. We see this clearly in the way she accepted her mission to be the mother of Jesus. She knew that she might lose Joseph in the process, but instead of clutching on to that, she let go and accepted whatever God wanted to give her–for the sake of her mission. 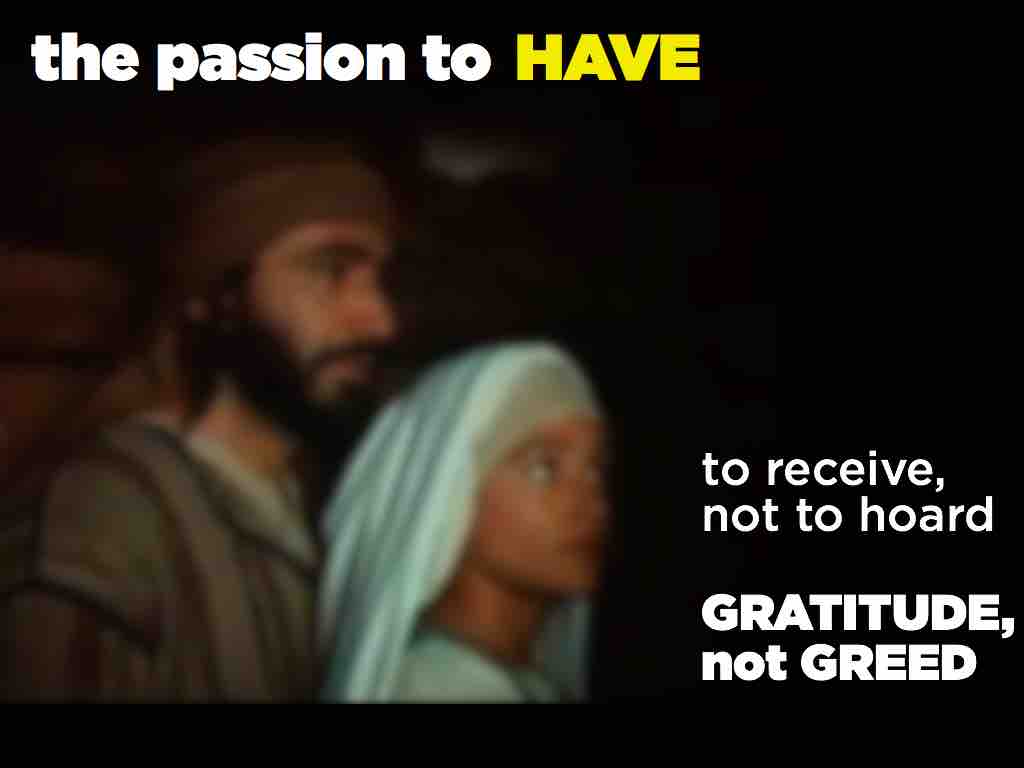 Like us, Mary also possessed the passion to CONNECT. But as she demonstrated to us in the way she raised her Son, she was also willing to let go of him. Mary was by no means attached to her son. For her, more important than her own needs was a selfless love for Jesus, a love that called for letting go of Him when the time came and letting Him become what it was that He was always meant to be. 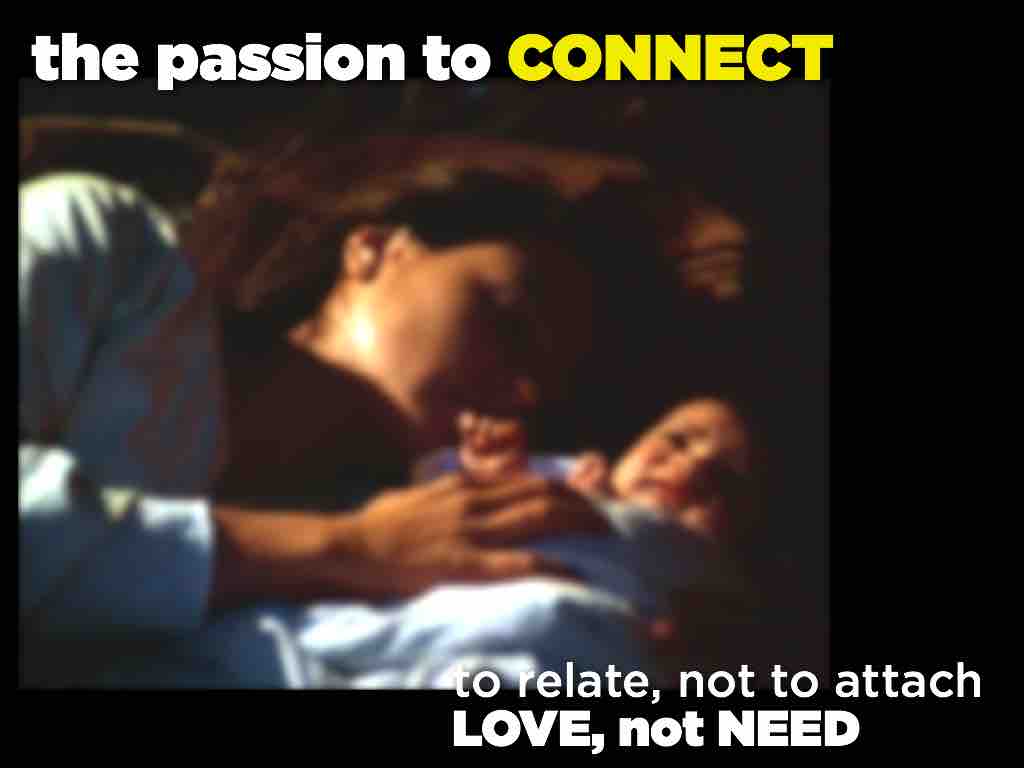 Finally, like us, Mary must have also wanted to make a difference, having also a passion to SOAR. But for her, soaring did not mean showing off, but serving–and this is exactly what she did right after finding out that she had been given the honor of becoming the Mother of God. She resisted every temptation to be proud, but immediately kept her cousin Elizabeth’s good in mind and went to see her to help her in what must have been a difficult pregnancy for a woman in her advanced age. 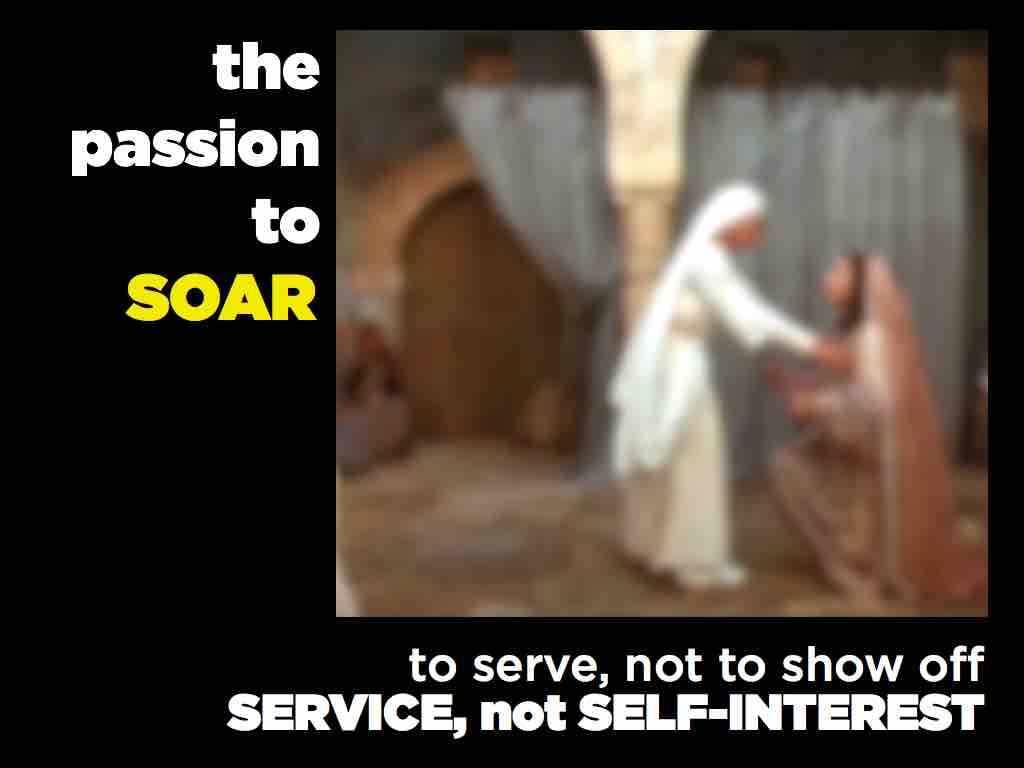 We are invited to learn from Mary in this great feast that the Church has reserved for her. When we look into that mysterious world in our suitcase, we are not being asked to eliminate or even repress our passions. Instead like Mary, we are invited to learn how to befriend and tame those fantastic beasts, and harness them for the greater glory of God: 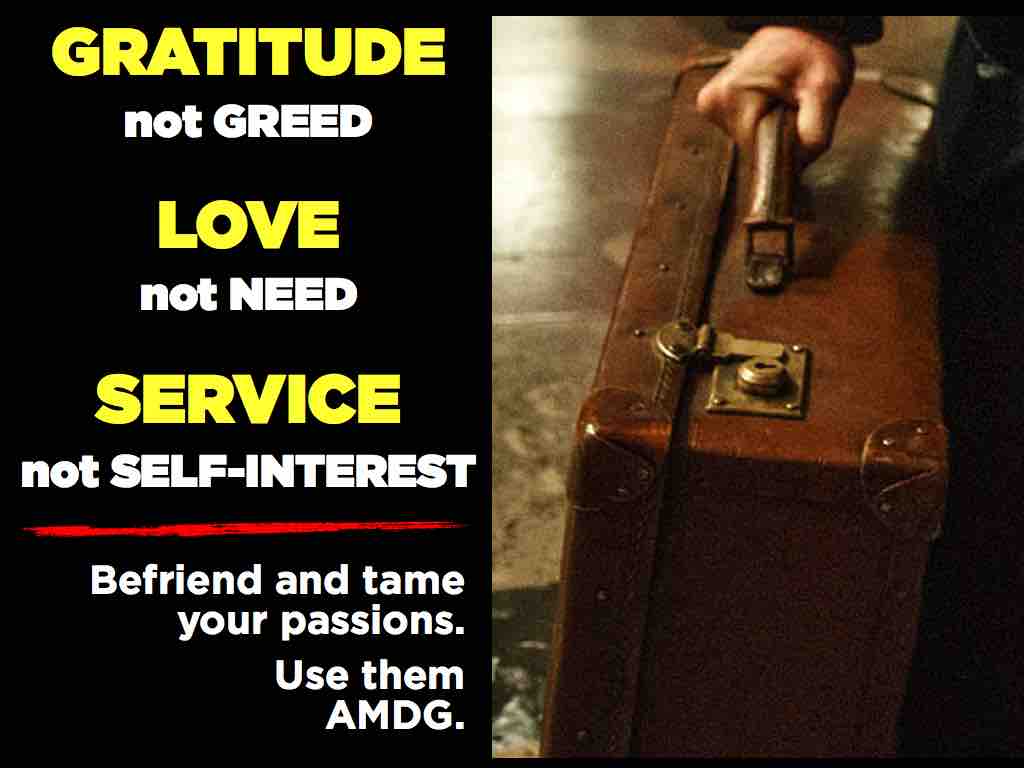 Happy Feast of the Immaculate Conception! May our mother Mary watch over us always.

Images from JK Rowling’s “Fantastic Beasts and Where to Find Them” (JK Rowling) and “Jesus of Nazareth.”

10 replies on “THE WORLD IN YOUR SUITCASE”

Fr. John what a lovely homily. To God be the glory for giving you such mind. The comparison of the different beasts and the inner beast in our life was so real like I really have to ask myself what beasts are hidden in my own suitcase?
Thank you for opening my eyes and beware of my own suitcase of beasts.

Gratitude! Love! Service! All for the greater glory of God! Thank you, Fr. Johnny, for this new way of reflecting on Mama Mary’s Immaculate Conception. You truly inspire us to be more prayerful and have a deeper loving relationship with our God. Salamat!

Thanks for this gem of a homily. As always, thoroughly thought out and heartfelt. Very apt to ponder on as we prepare for Christmas.
Wishing you graces and blessings always. Merry Christmas!

I have not yet seen the movie but loved this inspired reflection! You are very deft at juxtaposing contemporary themes with spiritual reflection reminding us that we live out what we believe, here and now.

Happy Feast of the Immaculate Conception. My family has a very old large statue and our family tradition was that a large reunion – mass followed by an outdoor meal, marked the beginning of our “Christmas season”. As I have gotten older and have stepped back to reminisce, it is rightly so!

What an awesome homily this was, Fr.Johnny! The boys were all excited
As they listened to the intro on Fantastic Beasts, and many of them listened throughout! I certainly did. Very tinely and insightful. Thanks and happy feast day!

Hi, Fr. Johnny!
I enjoy your homilies. You take great pains to illustrate how the word of God is to be lived in our daily lives. It’s as if I’m listening to TED talk. I hope you don’t mind the comparison. It’s just that I’m inspired after reading your homily. Thank you!

haha i’m flattered by the comparison. thank you!

Happy feast day to you too, Fr,. J. Thank you for this beautiful homily.