In our Gospel reading today, our Lord presents two very different people at prayer: The Pharisee, a law-abiding religious Jew, and the publican, a tax collector who is not only supporting Rome in his work, but is also probably very corrupt. 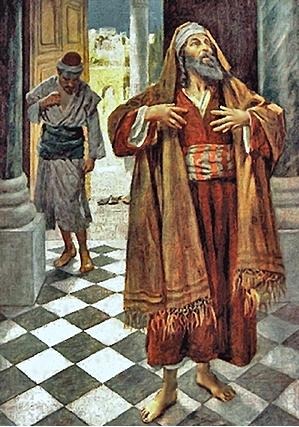 At the end, to the great surprise of his listeners then, Jesus proclaims the publican justified, but not the Pharisee. What about us? We’ve heard this passage so often before that we are not as shocked by Jesus’ statement, if at all. But before we rush away and begin nodding our heads in vigorous agreement, let’s step on the brake for a while and ask what the Lord’s listeners must have been thinking when he told them this story.

Not only might they have been surprised by the Lord’s justification of the tax collector, but our Lord’s audience also might have been scandalized by such an unprecendented pronouncement. How is it even conceivable that the Lord would put the notoriously corrupt tax collector, who, by the way, also serves as a traitor to his country, above the obsessively law-obedient Pharisee? Clearly, the Pharisee has done so much more good in his life than the Publican? What, therefore, was it about their prayers that made God choose the tax collector over the Pharisee?

Their prayers cannot be more different from each other. The Pharisee’s prayer is one of thanksgiving; the publican’s, on the other hand, is an almost desperate plea for mercy. While the Pharisee remains on his feet, with them securely planted where he feels he belongs, the tax collector’s has kept himself at the back of the synagogue, the place where he also feels he belongs. He might even have fallen on his knees, perhaps hardly able to raise his eyes to God.

Clearly, the Pharisee’s life has been more virtuous than that of the Publican–and he knows it. And there lies the rub. He is all too aware of his own efforts to remain righteous; in fact, he enumerates them in his prayer: fasting, paying tithes, avoiding sin.  His holiness has become his own personal accomplishments rather than God’s grace.

The Publican, on the other hand, has made himself low because he knows that he needs God’s forgiveness and help to save his soul. “O God,” he cries out. “Be merciful to me, a sinner.”

Nothing, it seems, melts the heart of God more than a person’s lowly heart, one that is conscious of its need of God’s love and mercy. Today let us examine our prayers and ask ourselves whose prayer they tend to resemble more. More importantly, we are invited to look into our hearts and to assess whose heart it resembles more: the self-complaisant Pharisee or the repentant Publican.

4 replies on “A COMPARISON OF PRAYERS”

how often we feel righteous and justified until weakness and sin humble us. thanks to the Lord’s mercy and compassion. we can hope to be strong, and hope to be and do right once more.
thank you for reminding us to reexamine our prayer life.

The issue is not that one prayer is better than the other. But that there is a grace-filled sequence to them. The prayer for mercy and forgiveness must be prayed first. Then when we have stopped sinning, shared our blessings, obeyed God’s commandments, we can offer our prayer of thanksgiving for His grace, pulling us out of our sinner corner. If the sequence is reversed, our prayer of thanksgiving will be one of self-aggrandizement which renders the prayer for mercy and forgiveness hypocritical.

Good observation, Fr J! What struck me more in my case is thethe clutter in everyday life that I tend to include in my prayers. This I need to change. Thank you! By the way, please drop me an email to let me know your phone number. I was in the Philippines for 3 weeks n didn’t know how how to touch base with you. God bless!