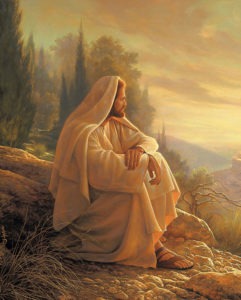 This reflection is based on John 18:33-37 on the Solemnity of Christ the King.

The conversation between Pilate and Jesus that we hear about in today’s Gospel reading is significant. It is one of the very few occasions in the life of our Lord that he admits to being king. The Lord Jesus is usually quite reticent about this matter–not only out of humility, but also out of caution: Then as in today, kingship is easily stereotyped into the worldly type of kingship, where power is wielded and coercion employed.

But as Jesus clarifies to Pilate, his brand of kingship is nothing remotely similar to the world’s usual notion of it. “My kingdom does not belong to this world,” he tells the bewildered prefect of Judea. Many of us probably agree with Pilate more than we think. While our lips profess that Christ is King, when push comes to shove, our concept of kingship lapses into the world’s. Putting it another way, we want Jesus to be a mighty superhero who destroys all of his enemies and emerge from the ruins as the clear victor.

Indeed destroy his enemies and emerge as victor he will–but not quite in the manner we hope or expect. Based on the way God has acted in history, especially as manifested in the very person of Jesus, his life and death, the Lord will bring about his kingdom in a way that counts on people’s cooperation. As a consequence, the coming about of his kingdom will involve no coercion and will, therefore, be less swift and less smooth than we want. Christ will emerge as King when we freely allow him to rule our decisions and actions.

When our Lord revealed his kingship to Pilate, he was inviting him to listen. Seeing the helplessness of Jesus before him, Pilate would not find the revelation easy to understand or accept. He could have asked Jesus questions like: “How can this be?” or “What does it mean to be a king that does not belong to this world?” These questions could have opened doors to a faith in Jesus. But Pilate asks no such questions.

It is not included in this excerpt, but in the very next verse, Pilate instead asks Jesus, “What is truth?” It is a rhetorical question, for which no answer is expected or desired. It is a question that shuts the door to any possibility of recognizing Jesus as King although it seems that the thought may have lingered in Pilate and disturbed him, for even after his verdict–and against the protestation of the Jews–Pilate insisted on hanging the inscription that declared Jesus “King of the Jews.”

On this Solemnity of Christ the King, we are offered a portrait of a King who, in a world that continues to be shaken by unspeakable violence, seems far from triumphant, we must have questions we want to ask. What are your questions? And do your questions open or shut the door to our King?

One reply on “QUESTIONS THAT OPEN DOORS”

I am shaken and heartbroken, wishing for a conquering king who will make the world right. But by whom? What is truth? What is the right path? It seems everyone, imcluding the racists and terrorists and deniers of climate change who seem to be calling the shots, is in search of it or are convinced they have found it.

But, as you said, He will emerge as king when we freely allow him to rule our decisions and actions. While He is king of my heart and mind, I wish He would assert himself as the just and righteous king of all the world.