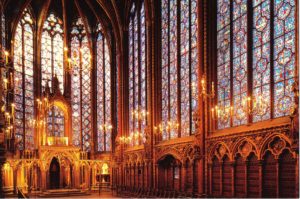 Some years ago I visited a chapel in Paris I never forgot. It’s called the Sainte Chapelle. It was neither impressive nor imposing from the outside, but the moment you step inside, it immediately takes your breath away. For instead of walls, the Sainte Chapelle has columns upon columns of the most colorful and intricate stained glass windows. The stained glasses feature hundreds of Christian images and stories that we have grown up with. Basking in the multi-colored sunlight streaming through those holy images, you can’t help but feel that you are truly in a special and sacred space.

As I stood there that day, I thought to myself: “Truly an aesthetic and architectural feat!” But though I initially couldn’t put my finger on it, something seemed to be missing. Something didn’t feel quite right. It was only when someone’s camera flashed beside me that it struck me: The chapel wasn’t serving the purpose for which it had been constructed. Clearly it had been intended as a house of God, and in eras past this breathtakingly beautiful chapel would have been filled with the scent of incense and the murmured prayers of the faithful. But now, what was supposed to be God’s house of prayer was packed no longer with devout worshippers on their knees deep in prayer, but with eager tourists jostling to record every moment of their visit with their cameras.

I couldn’t help but remember another chapel, very different from this one. It was a chapel in Payatas, where I used to say Mass every Sunday. What set that chapel apart was not its architecture or interior design for it didn’t have much, but the ever-present smell of the garbage dump located a few kilometers away, where the residents scavenged to make their living. Even inside that chapel, the smell was strong and unmistakable. Yet every Sunday morning that humble and poor chapel would be packed with people gathered for worship: Men, women, and children sang their hearts out, eyes occasionally shut and arms raised in devout, desperate prayer.

Suddenly, even bathed in all its beauty, the Sainte Chapelle seemed like such a sad empty place. It felt almost like God had been driven out of His own house, a mere memory, an accidental artifact from the distant past.

If the Lord Jesus had come visiting that day, I wonder, would he have done what he does in today’s Gospel? Would he have cried out,”My fathers house is a house of prayer”? Would he have complained that we had turned it into a den–maybe not of thieves and moneychangers, but of selfie-obsessed tourists eager to upload their next “most-awesome-ever” profile pictures?  And would the Lord Jesus have–heaven forbid!–done the unthinkable: Confiscate and toss out everyone’s iPhones and Samsungs and drive the tourists away?

Had he done that, and if someone managed to post a video of it on YouTube, the post would most likely not get too many Likes. But it might still just go viral and you can almost imagine the harsh comments from the usual anonymous haters.

You see, as it was during our Lord’s time, it isn’t popular to speak the truth–or worse, to take matters into your own hands the way he did that day in the temple. We’re told that it was this event of the cleansing of the temple, more than anything else he had ever said or done, that might have finally convinced the Jewish leaders that he should die.

And it didn’t help at all that when the Lord was questioned on whose authority he did what he just did, Jesus gave one of his bewildering responses: “Destroy this temple and in three days I will raise it up!”

As it dawned on his disciples much later, he was referring not to the actual Jerusalem temple, but to his own body. Which, if you ask me, does nothing but complicate this whole business of temple-cleansing even more for us.

For in saying that the temple is his own body, he is trying to tell us something about our own, which St. Paul, in his first letter to the Corinthians, actually talks about when he writes: “Do you not know that your bodies are temples of the Holy Spirit?”

For if our Lord did everything–and risked everything–to cleanse the temple that day, making a whip of cords, overturning tables, and driving out the money changers, is he not today inviting us to do no less with our own private temples? Since it is our temples, the Lord won’t be rushing in anytime and cleaning it for us. That’s the mystery and misery of it: we will have to do the work ourselves. Is it possible that he is asking us to check if our lives remain God’s temples as they had always been intended–or have we also unwittingly turned them into something else, allowing them to be cluttered with all sorts of things that don’t belong there?

If we have, it’s never too late to do some house-cleaning or to rearrange the furniture of our lives. Where would you start?

One reply on “HOUSE CLEANING”

One of the best homilies yet. Thank you for this timely reminder Fr. J. Where to start indeed.