Have you ever experienced a time in your life when everything seems to have gone wrong? You wake up one day, and for some reason, your whole life lies in ruins. Your dreams have been shattered, and your heart is broken. Life in general has let you down, and the only option you feel that remains open for you is to give up or walk away as quickly as possible. 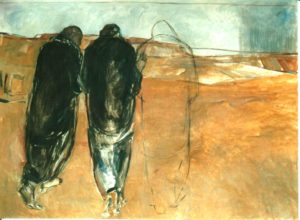 If you’ve had that experience, then you’ve been on the road to Emmaus. From your own experience, you can imagine how these two disciples in our Gospel reading must have been feeling as they walked away from Jerusalem–and from everything that it stood for. Their lives must have felt like they lay in ruins. All that they had hoped for and dreamed of, as represented by their teacher Jesus–all that was shattered. Life had let them down in a most spectacular way. With their hearts broken, what choice did they have except to walk away and hope to forget it all?

They were even too tired to hope again. Upon their own admission, they had actually heard rumors that Jesus was alive, but just the same, they decided to pack up and leave anyway. We get that, don’t we? Sometimes we’re too tired to even raise our hopes, or we simply don’t want to get disappointed or hurt again.

“Are you the only one in Jerusalem who does not know all the things that have taken place there?” they asked him incredulously.

When the stranger replied, “What sort of things?” the disciples proceeded to pour out their hearts–without any hesitation. Clearly they needed to talk. We know the feeling: When we’ve been traumatized and heartbroken, we need to talk! Talking to someone allows us to share our burden, and it somehow has a way of easing our load.

Which is exactly what our Lord allowed them to do. He listened to them patiently even if he already knew what was in their hearts, but afterwards he also did more: He pointed out things to them, things that their sadness and hurts were preventing them from seeing. And more importantly, he gave them hope. Later, when the disciples recalled their conversation with the stranger, they said, “Were our hearts not burning within us?” The Lord knew that just as important as understanding Scripture, what these two disciples needed was to learn to hope again.

In their Emmaus experience, the disciples drew hope from the kindness of this stranger. And it was this hope that empowered this pair of disheartened disciples to take heart and rush back to Jerusalem, the very same place that they had wanted so much to run away from.

You may have had a similar experience as these two disciples. Maybe at a time when you were feeling downcast and discouraged, you chanced upon a stranger on some road, a concerned neighbor, an observant teacher perhaps, a friendly priest, an unexpected friend… Someone appeared virtually out of nowhere to break bread with you by listening to you, offering a shoulder for you to cry on, and helping you to see things that your tears had kept you from seeing. And just by spending time with you, by extending a much needed kindness, this person somehow helped you to hope again.

If you’ve had that experience, then you’ve encountered the Risen Lord, for the Risen Lord is the stranger who walks with us, the one whom we accidentally bump into on the road, and the person who, by keeping us company and extending kindness to us, manages to rekindle our hearts with hope.

If you’ve been on the road to Emmaus, if you’ve “been there, done that” and like the two disciples found your way back to hope, the Risen Lord asks that you return the favor, that you “pass it forward.” Be that stranger on the road to those in need: Ask about them, interrupt their conversation if you must, spend time with them, listen to them, let them share their burden, be kind to them–and give them hope.

It’s not easy, but nobody said following the Lord was easy. So let this be our Easter prayer: that the Lord may grant us the courage and the generosity to extend this Easter kindness of stranger, so others may see in us the Risen Lord.

4 replies on “THE KINDNESS OF STRANGERS”

Almost twenty years ago, I was driving on my way home when my car partly got snagged by this chunk of road that was under major repair. The tire fell into the “hole” and it was impossible for me to get the car out unless I had help.

I still find it unbelievable that somebody helped me that time, because it was late at night. Worse, it was raining! But someone did! A young mestizo guy with his family (I assumed it was his young wife and their baby) got out of the car. The guy LIFTED the car and got it out of the hole. How he managed to do it, I don’t know. But he did. Of course, I thanked him and his family profusely. I offered to buy them dinner, but they just politely declined the offer. After bidding each other goodbye, it was then that I noticed the car (it was blue, no license plate). The wife and the baby just smiled at me the whole time the guy was working on my car(which I found strange). I definitely think of them as God-sent (I still imagine that the Holy Family helped me out that night!).

I’ve met many people since then who have made me doubt whether we are as a species are truly evolving (or maybe devolving), but this is one moment that makes me think, kindness still exists in the hearts of strangers.

The Road to Emmaus is always a beautiful and rich Gospel. In your retelling here, I know I am walking the “road”. It is my story (and the story of many others too). I am both the disciple and also Christ unrecognized walking with another.

Thank you. Your words and the beautiful image remind me that “God-with-us” is not just at Christmas, because Christmas is really but a part of the Paschal mystery. “God-with-us” is always . . . when we open our eyes and our heart. Therein lies our hope and our peace as we walk our “road”.

It always amazes me how much our Lord is willing to do for us. One would think that doing the ultimate sacrifice of giving Himself up on the cross is enough and yet, He continues to be there to act as cheering squad when all hope is lost.
I pray we take His example to heart when we find ourselves in the role of the stranger on the road.