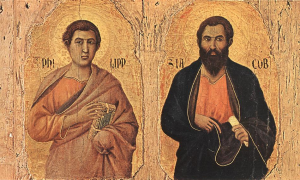 Today we remember Sts. Philip and James, two of the lesser known apostles of our Lord. We know little of very little of them compared to the likes of Simon Peter, John, Matthew, and even Judas Iscariot.

All we know about James, for example, is the name of his father, Alphaeus, who is mentioned only whenever he is listed as among the Twelve chosen by Jesus. This is not the same James who was a son of Zebedee and the brother of John. He is not the James who belonged to our Lord’s inner circle, invited up the mountain to witness the Transfiguration, into the house for the raising of Jairus’ daughter, and close to him in Gethsemane for his prayer the night of his arrest. That James is called James the Greater, after whom the well-known pilgrimage, Santiago de Compostela, is named. This one is the “lesser” of the two, and was, in fact, actually called “James the Lesser.”

Neither is this James the James of the Acts of the Apostles, the one referred to as the “brother of Jesus,” bishop of Jerusalem, and the recognized author of the Epistle of James.

This James was “just” one of the apostles, and in fact, is one of three that John’s account fails to mention (the other two are Matthew and Simon the Zealot). Perhaps he was an introvert in a group of extroverts, and like so many who find themselves associated with great achievers and colorful characters, was in constant danger of fading into the background and falling through the cracks.

Philip is luckier because at least he is mentioned several times in the Gospel according to John. But aside from his call by the Lord, for instance, he is not exactly shown in a good light. First, there is the episode of the Multiplication of the Loaves, when our Lord asks him what they should do to feed the crowd, and he made a quick calculation and reported that they would need more than eight months’ worth of wages to feed them all. We’re told by John that this is a test, and clearly Philip doesn’t ace it.

In today’s Gospel reading, we can’t help but detect the exasperation in Jesus’ voice when right after revealing that he is “the Way, the Truth, and the Life,” Philip asks him to show them the way. An honest and sensible question, if you ask me, but as we know, the disciples have always been too slow in understanding their mysterious Master and his equally mysterious teachings. In this episode Philip shows again that he doesn’t get it.

I don’t know about you, but I’m grateful that the Church has dedicated this feast to these two lesser known apostles. Not only does this feast provide us the occasion us to remember them and get to know them better, but it also gives us a chance to understand that discipleship isn’t always about being great or doing something great. It can be lived out even by the lesser ones among us, those who don’t get mentioned or noticed, or those who don’t always get it. Following the Lord can be a quiet, low-profile affair. The important thing is that we rise to the occasion when it presents itself to us, as Philip does at the beginning of Jesus’ ministry when he brings Nathanael to the Lord, and much later on, in the Acts of the Apostles, when he steps up like a true apostle, preaching the Good News in Samaria.

So today, on the feast of these two apostles, we pray for their intercession as we continue to work at our following of the Lord Jesus even if sometimes all that we can really do at first is fumble after Him.

One reply on “THE LESSER KNOWN APOSTLES”

Thank you for shring this homily. Thru these homilies, we are learning a lot. We are enlighthened. May we request you to share more. More power and God bless.