Before the Last Supper, there was one other special supper recounted in the 12th chapter of the Gospel according to John.

It was actually a dinner thrown by the friends of our Lord, the siblings Martha, Mary, and Lazarus of Bethany. Just barely a week before his arrest and crucifixion, Jesus attended what might have well been an accidental despedida party of sorts, and here we see how our Lord provoked such a wide variety of responses from the different people around him. 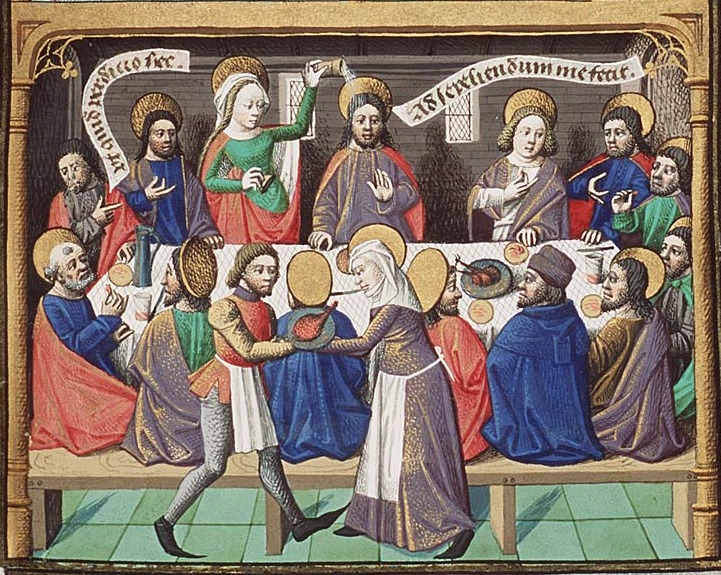 From Martha he received her typical VIP treatment, accorded to him whenever he visited their home. As always, she busied herself in the kitchen and waited on him. It was what Martha did best, and it was her favorite way of expressing her care for the Lord. But as our Lord had pointed out in a previous visit, perhaps in her desire to make him feel welcome, she was missing out on his company.

Her sister Mary, as always, preferred to remain near the Lord. This time, however, she was not content simply to sit at his feet and listen. For some reason, this time she decided to do more: She anointed the feet of Jesus with expensive aromatic oil. Perhaps being close to the Lord, she sensed his anxiety as the day of his death approached, and even if she most likely didn’t understand it, she wished to provide him some relief or comfort.

Or could it be her way of showing her remorse for some past sins–in light of the other Gospel accounts that portray a similar scene depicting an unnamed sinful woman offering the same service to the Lord? Whatever it was, clearly what the Lord consistently elicited from Mary was a personal expression of love and care.

Things get more interesting with the rest of the characters in the scene. Judas Iscariot disapproved of Mary’s lavish gesture of love, announcing quite self-righteously that the money should just have been saved for the poor. Did he really care much about the poor? The evangelist doesn’t think so, calling him a thief who steals from the collection. Perhaps Mary’s blatant display of affection and love was too uncomfortable for Judas since he knew in his heart that in just less than a week, he would betray his Master and turning him over to the Jewish authorities.

Of course the Lord saw through him and reminded him that unlike the poor, Jesus himself would not be around for long. It’s a strange response when you think about it: Our Lord uncharacteristically prioritizing himself over others,not to mention the poor. But it might have well been simply his way of reaching out to Judas and inviting his friend to rethink his plans.

And then we have the crowds who, we are told, now increasingly believed in the Lord because of his deeds, especially his recent astonishing miracle of raising Lazarus from the dead. They gathered around the house to see more of Jesus–as well as Lazarus. They seemed always hungry for signs, desperate–like many of us!–for reassurances of God’s presence and action in their midst.

Finally, we have the chief priests who, by this time, were beyond Jesus’ reach. Perhaps their minds had been closed and their hearts hardened for sometime now. It is what happens to us when we don’t want to make room for God in our lives. By the time of this supper, the Jewish leaders, horrified by the spreading conversion of the people, were more than ever convinced that they needed to kill Jesus.

The different responses of people to the Lord say as much about them as they do about Jesus especially as they approach Passover when things will come to a head. It is when things come to a head, after all, when crises happen in our lives, that we reveal our true colors, that life brings out the best or the worst in us.

From among the characters, with which one do you identify the most and why?

As we commemorate the last days of our Lord’s life, let’s ask ourselves: “What does Jesus bring out in us? And what does this say about us and what we need to do this Holy Week?”

6 replies on “WHAT DOES JESUS BRING OUT IN YOU?”

I can do things which are quite hard for me to do. I become more courageous. I ask Jesus to help me be brave to accept his will.

It is good to have this Father John as I am now living abroad. I always try to go to Xavier or Mary the Queen to attend your retreat.

I think of myself as more on the “Mary” side. It’s like a loved one who’s going away and you want to spend the rest of the time left where you can be together because you know that this person will be missed… And for the short while that this person was in your life, you want to give him the best because he had done a lot for you and a lot of other people. For a short while, you have someone you can trust…….. Then, I pour an expensive oil, maybe to entice him to stay longer? Or maybe to give him honor for what he had done….

He reminds me that pain, suffering and sickness are part of a process of making me a whole and a better person.

This Holy Week is a way of going deeper into my relationship with Jesus. It reminds me also that there’s a glorious life to be lived after all the pains…. And the best part is that the glorious life is forever!

Were there children in this party? Jesus brings out the child in me, that part of me that is missing my father who died too soon.

I never thought of that question, but who knows? 🙂 You may just be right!