This reflection on Luke 1:26-38 was made on the occasion of the Solemnity of the Annunciation of the Lord.

I moved into my new room the other day and took pains in planning how to arrange its furniture. I thought to myself: “I’m going to spend a lot of time here this year, so I may as well design this space carefully.” It took me a couple of days moving and rearranging the furniture. Once satisfied with the lay-out, I capped my chore by vacuuming my new sanctuary and work space, optimistic and eager to settle in.

I mention this little domestic accomplishment because as I was praying over the Gospel story of the Annunciation this morning, it occurred to me that when the angel Gabriel entered the scene with his unexpected–but also disturbing–annunciation, he was effectively asking Mary to let God rearrange her furniture–something I’m not exactly sure I’m willing to let God do.

At that time, Mary’s life had been pretty well laid out: Like many girls her age, Mary was engaged and soon to marry her fiance Joseph to raise a typical Jewish family in what from all appearances was going to be a quiet and hopefully happy life. And now, suddenly she received this invitation to bear in her womb “the Son of the Most High,” which was all good and fine except that Mary had absolutely no clue what that meant and who “the Son of the Most High” was going to be. 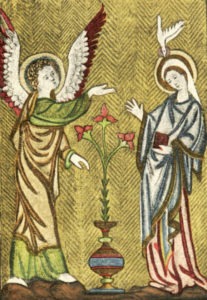 What Mary knew was that if she said “yes,” it would spell trouble for her and Joseph (And true enough, his first and totally natural reaction was to divorce her quietly). It would also create problems for her family and their name (True enough, Jesus grew up being referred to as the “son of Mary” rather than the customary “son of Joseph,” a subtle but no less cruel reminder that he was an illegitimate child). And most of all, it would mean danger for her very life (Indeed the law of Moses prescribed that women caught in adultery could be stoned to death).

In short, not only was God asking to rearrange the furniture of her already carefully laid-out life, but she also already knew that all that furniture-moving wouldn’t lead to a pretty picture. Mary was right to be troubled and to be afraid.

But she also trusted. She suspected that having her furniture rearranged also meant creating room for God to move into her life. Besides, deep in her heart, she knew that as far as designs go–interior or exterior, God had far more exquisite tastes than her. And when the angel told her the surprising news about her long-suffering cousin Elizabeth, now–finally!–with child, Mary required no more convincing. She needed no further confirmation that more than anyone else, herself included, as far as what was best for us was concerned, this God knew far better and wanted it for us much more than ourselves. That was probably the moment when she decided to believe (for yes, believing is a decision) and in her heart of hearts, accepted to be God’s handmaiden. As we know, her life was never the same again, and thanks to her “yes,” our history, the house of humanity, was never the same again too.

And so on this Feast of the Annunciation, I can’t help but wonder: “How willing am I to let the Lord rearrange the furniture of my personally and perhaps even painstakingly laid-out life, to make room for Him? How ready am I to say the words of Mary, ‘Behold, Lord, here I am! May it be done to me according to Your Will’?”

May we be as generous and open when we receive our annunciations.

What a unique take on the Annunciation! Beautiful piece Fr Johnny! Only you could have thought of writing this.

Thank you for the kind words, CB! 🙂

it’s a tough question for me. Thanks for asking Fr Johnny.