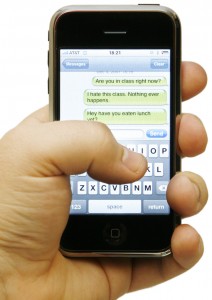 This homily was delivered on March 2, 2014 at Mary the Queen Parish.

These days I’ve been quite fascinated by this so-called text or chat language. I’m referring to all these acronyms and abbreviations that young people seem to be using all the time when they message each other on their phone and on the Internet. It’s an ever-growing, ever-evolving language, and it’s really not easy keeping up with some of the new stuff that’s coming out.

And for parents out there, I just found out that there’s a whole set of code that texters use to warn their friends if you’re happen to be around. There’s PAW or PRW, which both mean “Parents Are Watching.” There’s also PIR, which stands for “Parents in the Room.” And POS, which means “Parent Over Shoulder.” The one that blew me away is “KPC.” Can you guess what it stands for? It means “Keeping Parents Clueless.” Well, now you know…

It’s not easy keeping up with text and chat language. And it’s also not easy accepting what they’re saying once we figure it out.

Anway, I mention all that because in our Gospel today our Lord uses pretty plain language to teach us something quite simple and practical, but it may not be so easy to accept what he’s saying once we figure it out: He tells us “not to worry about tomorrow.”

“Look at the birds in the sky,” he says. “They don’t sow or reap; in other words, they don’t do any work, but God feeds them and takes care of them.”

If we had the chance to text with the Lord, which abbreviation or acronym would you consider sending to him in response to that message?

Probably the most automatic text response, the most obvious and maybe most common one,  would be ICAM, which means “I Couldn’t Agree More.” How else can we respond anyway? The teaching came from the Lord, and it’s our job to accept it. That’s what having faith means, right?

But some of us may not be so quick to agree.  We may prefer to respond instead with something like “2G2BT” (“Too Good To Be True”). It doesn’t mean that we don’t have faith in the Lord, or that we don’t accept what he’s telling us. In fact, there’s nothing more we want than to believe what he’s saying, but then, life so far, as we have lived it and experienced it, doesn’t seem quite so simple and so easy. Not worrying about tomorrow isn’t as easy to put into practice as we would like. Whether we like it or not, there’s still this deadline for a big project to work on and worry about, or that Calculus exam next week. We wish we didn’t have to, but doesn’t what the Lord is saying really sound like it’s “too good to be true”–or 2G2BT.

Another possible text response, which I hope we won’t think about sending because it’s not exactly polite is YYSSW, which means “Yeah, Yeah, Sure, Sure, Whatever.” But actually, I get it if that’s how you feel about what the Lord is telling us today. On the one hand, some of us may think: “Yeah, sure, it’s easy for you to say ‘Don’t worry about tomorrow’–you’re God Almighty!” But on the other hand, especially with Ash Wednesday coming up next week, we may also be thinking, “Yeah, sure, but remind me, didn’t you end up on the cross?”

As I said, it’s not very polite, but these are very valid and human thoughts, and I bet our Lord wouldn’t take offense at all and will totally understand. If we actually texted that to him, I imagine he’ll text us back with TMOT: “Trust Me On This.”

Yes, life is hard, he’ll tell us, and the world is complicated, but precisely because of that, don’t worry about tomorrow. God will take care of everything. Our worrying does nothing but make things worse.

This reminds me of an often-told fable, a story that teaches a similar lesson about living our lives…

A group of friends decided to go out for a ferry ride, but they had to leave someone behind because he still hadn’t arrived when it was time for boat to go.  As the boat was pulling away, they saw the latecomer, Joey, running down the dock, but by this time it was too late for the boat to turn back. Joey wanted to join the ferry ride so much that he did the unthinkable: He jumped into the water and started swimming towards the boat to catch up with his friends. He swam for quite a while and then started to sink. The friends saw what was happening and shouted to him, “Come on, Joey! Don’t give up! Keep swimming! And drop the rock!” With that encouragement, Joey resumed swimming, only to find himself sinking again. He was going under when he heard the voices of his friends again: “Joey, drop the rock! Let go, and drop the rock!”

It was then that Joey realized that there was something around his neck although he couldn’t quite figure out what it was. “Don’t be an idiot, Joey!” his friends continued shouting, “drop the rock!”  Then Joey understood. There was a rock tied around his neck–not a literal rock, but a figurative rock that stood for all his unnecessary worries about his future. But it also stood for all his regrets and remorse about the past.

Not only was this rock keeping him from swimming towards the boat, but it was also weighing him down and causing him to sink.

Joey managed to stay afloat just long enough to untangle the strings that held the rock around her neck, and immediately realized that his load was easing up. With another burst of energy, he let go. He dropped the rock, and once free of the rock, he was amazed how easy it was to swim, and he soon caught up with the boat.

What’s the moral lesson of the story? Very similar to what our Lord is telling us about not worrying about tomorrow–but it also tells us not to keep carrying the burdens of our past.

The story compares life to swimming in the waters, but as in the case of Joey, many of us live our lives going around with an unnecessary burden, weighed down by a rock that stands not only for our worries about the future but also our regrets about the past. When we think about it, there is absolutely nothing we can do about these two things. We can’t change the past, and we don’t know exactly how the future will turn out. Yet very often we waste a lot of time and energy doing one of two things: bashing ourselves with our mistakes and failures, or conjuring the worst possible scenarios in the future. In the process, we just feel miserable and helpless.

If we have faith, it is time to drop the rock–not only our many imagined worries about the future, but also our useless regrets about the past.

After all, as the Lord may tell us in a follow-up text: YOLO–or “You Only Live Once.”