Our Lord really did a lot of cleaning up
during his Public Ministry.
The first Gospel reading
that we will pray about today
recounts what perhaps was one of his most dramatic–
and disturbing!–cleanup operations:
the Cleansing of the Temple.

Read the following Gospel passage
with the usual recommended mindfulness and imagination,
creating the scene in your mind
while remaining conscious of your feelings and thoughts.

Play this instrumental music
as you pray over the passage.

The Cleansing of the Temple is one of those few events
reported in all four gospels.
For Matthew, Mark, and Luke, it happened
right before our Lord’s Passion; in fact,
the resulting conflict with the priests and scribes of the Temple
persuaded his enemies all the more that Jesus should die.

John, however, reports this incident
right after Jesus’ first miracle at the Wedding at Cana,
locating it quite early in the Lord’s Public Ministry.

Whenever it actually happened,
all four Gospels agree on one thing–
even if we may not like it:
Jesus was angry.
In John, he even makes a whip of cords
to drive out the moneychangers
as portrayed in so many paintings.

We have to understand what he was so upset about:
It wasn’t so much just the business in the Temple,
as the corruption in it that angered Jesus.
The Temple corruption took such unfair advantage of the poor. 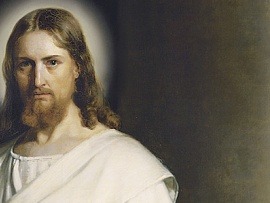 Be that as it may,
nobody likes an angry Jesus;
we’re not comfortable with such a Jesus.

We prefer the gentle Shepherd,
the humble Feet-washer,
to this whip-cracking,
temple-cleansing Prophet.

Our Lord’s anger is actually understandable.
Remember: We feel anger
only when we care.
We don’t get angry
over things that don’t matter to us,
or at people we don’t care about.

Our Lord expressed his anger
not to hurt others,
but to teach them something valuable
because the issue at hand and the people involved
meant a lot to him:
They are not to turn his Father’s house
into “a den of thieves.”