There was another kind of washing
that happened on Good Friday–
one totally different
from the humble and loving acts
of feet-washing
the previous night.

Read the account from the Gospel
according to St. Matthew.

Again, you are requested
to read the Scriptural passage
mindfully and prayerfully,
creating a movie in your mind
as you do so.

You may play this piece
of instrumental music
to help you enter into the scene. 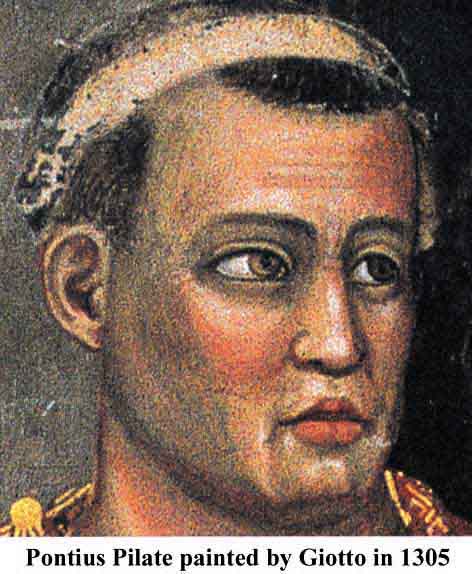 If we read the Gospel text closely,
Pontius Pilate, the governor
whose go-signal was needed
for Jesus’ execution,
is a most interesting character,
to say the least.

In a strange sort of way,
at this particular event,
Pilate showed himself to be
less a ruler of the people
than their puppet.

Clearly he was convinced of Jesus’ innocence.

Also, he knew all too well the danger
of releasing the “notorious” Barabas.

On top of that, he understood
that it was the envy of the Jewish leaders–
and not any sort of crime committed by Jesus–
that brought him to this fate,
a fate now thrust into his hands for judgment.

And even his own wife had pleaded for this “righteous” man.

And yet despite all this evidence,
Pilate decided to grant his approval
for the crucifixion of Jesus as requested by the Jewish leaders
and as demanded by the noisy mob.
He knew that it was not the right decision;
yet he made precisely that decision.

He was unable to make the right decision
because he was not free to do so.
Far from being a ruler, Pilate was, in fact, a slave–
a slave to his own NEEDS and FEARS.

Matthew tells us that Pilate yielded to the demands of the people
when he saw that “he was gaining nothing.”
It was this self-interest, probably his need to remain in power, as well as
his fear of a possible rioting among the Jews and reprisals from Rome,
that robbed him of the wisdom and courage to do the right thing–
and made him approve of the immoral execution of an innocent man.

His is a classic example of how our instinct for self-preservation,
our needs and fears, can blind us, keep us from doing what is right,
and lead us to error and sin.
Had Pilate possessed greater self-understanding and self-mastery,
perhaps he would have made the right discernment and the right choice.

How often we fall to a similar trap,
into the slavery of our own needs and fears!

When Pilate washed his hands,
he did the exact opposite of Jesus washing the feet of his disciples.
While the Lord’s act of feet-washing was an expression
of connection to humanity and an inclusion of all,
Pilate’s hand-washing meant something else:
“I will have nothing to do with you
and nothing to do with what’s about to happen!”

While our Lord did everything to connect himself to us
and to include everyone in the process
Pilate washed his hands to disconnect himself
and to exclude others from his life.

This Holy Week, the Lord invites us to make a choice:
Shall we be like the hand-washing Pilate,
disconnecting self,
excluding others–
or shall we follow our feet-washing God,
constantly trying to find ways to connect Himself to us
and including all?

Think about that for a while.