Our Lord sent the blind man
to the Pool of Siloam
to do his part for his healing.

It’s now your turn to be sent to that healing pool.

What will YOU wash at the Pool of Siloam?

To help you to decide,
let’s use a familiar list as reference:
The Church has what it calls “The 7 Capital Sins”–
also known as the “7 Deadly Sins.”

In 1995, there was a Brad Pitt film entitled “Se7en”–
which is really a reference to the 7 deadly sins
as listed below in the movie poster.

In the trailer, the detective played by Morgan Freeman
enumerates the 7 Deadly Sins.

Here is a brief description of each of the 7 Capital Sins.

As you read through the list, ask yourself:
“Which of these capital sins
seems to be my biggest weakness?”

1.  GLUTTONY (in Greek, Γαστριμαργία):
An over-consumption of anything to the point of waste,
but also consistent priority of self-interests over those of others–
to be represented by an insatiable MOUTH.

2.  GREED (Φιλαργυρία):
Excessive acquisitiveness or addiction for material possessions–
as symbolized by a hoarding BELLY.

3.  SLOTH (Ἀκηδία):
Physical and especially spiritual laziness,
especially in one’s inability to develop and use one’s God-given talents–
to be represented by a lazy HEART.

4.   ENVY (Λύπη):
Powerful desire for others’ gifts and possessions,
as well as unhappiness over other people’s fortunes–
represented by jealous EYES.

5.  WRATH (Ὀργή):
A lingering hatred of others, self-destructiveness,
and even violence–
symbolized by HANDS that hurt others and one’s self.

6.  PRIDE (Ὑπερηφανία):
A sense of superiority over others, excessive admiration of self,
and failure to appreciate others–
represented by a CHIN held too high.
Pride is the original and most serious of these 7 vices, and is the source of all sins.

7.  LUST (Πορνεία):
An excessive desire for money, food, fame, power or sex–
to be symbolized by a coveting MIND.

If you had a chance,
which part of yourself would you wash
at Siloam for healing? 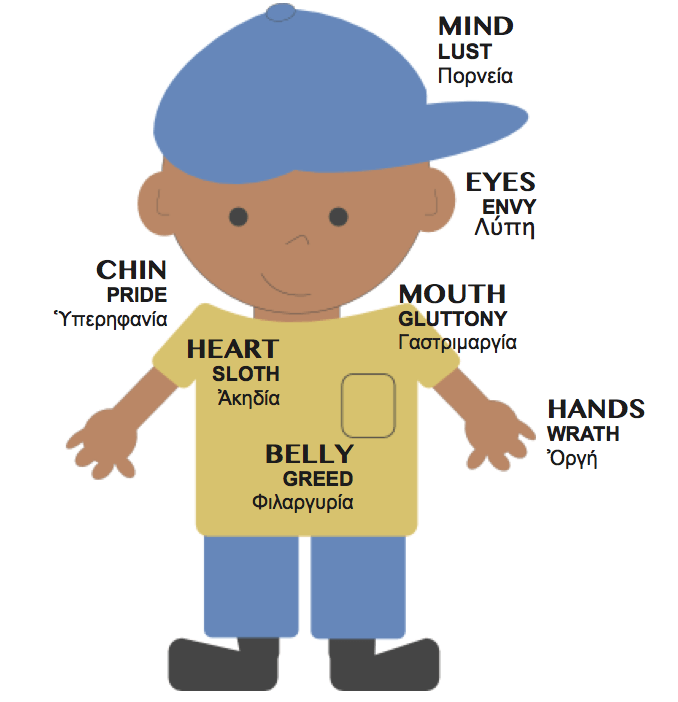 Share your answer in our survey:
It is an anonymous survey,
so no one will know who you are.
But your response might help others
reflect about their own lives.
Click here.