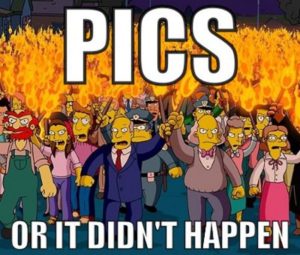 There has been a deluge of clever memes online that says “Pics or it didn’t happen.” It’s a phrase more and more often used to challenge people who make claims that are either extraordinary or simply impossible.

Last month I casually mentioned to a friend that I had met a Hollywood actor on the set of the location shoot of his latest movie. My friend’s response? “Pics or it didn’t happen!”

My surprisingly defensive explanation (“But pictures are forbidden on set!”) did nothing but elicit one skeptically raised eyebrow that said it all in silent judgment: “Right, no selfie…”

We have two parables today, both concerning seeds and usually called the Parable of the Growing Seed and the Parable of the Mustard Seed. It’s the first one–the less dramatic of the two, in fact–that speaks to me. One particular line strikes me: “…[the man] would sleep and rise night and day and through it all the seed would sprout and grow, he knows not.”

We find ourselves living in an age when there is an ever-growing demand for “evidence” (selfies being a particularly fashionable genre). With social media increasingly penetrating and defining our lives, we are sometimes made to feel that if we don’t post something on the Internet, it isn’t real. Got together with your high school friends last night? Better Facebook that! Getting married this weekend? Why not tweet about it? Went swimming with the whale sharks? Quick, YouTube it! Ate your lunch today? Yes, Instagram that selfie with your half-eaten chicken sandwich!

(I say all this without judgment since I’ve done it all!)

The first parable is about the invisible things and events in our lives. It reminds us that every moment of our lives there occur events that we know not of, and all around us there exist beings that we see not. It’s a timely reminder because we are constantly deluged with the idea that the only things that matter in the world are those that we can see and touch–or share with our online friends/followers.

The parable invites us to examine ourselves and what we use to measure the reality and value of things. Of course we all profess–or at least, pay lip service–to the basic Christian belief that God and His often invisible actions are far more important than material things and events. But do we actually decide and act accordingly? Do we tend to value things that have–to put it bluntly–the potential to get more Likes on Facebook, trend on Twitter, or go viral on YouTube? Or are we able to put a greater premium on things that may be invisible but are actually more important?

Take a reality check: What is your criterion for the reality and value of things? The perceptual criterion–i.e., whether or not something can be perceived or worse, measured–or the causal criterion–whether something, whether visible or not, has the power to make a difference in your life and in the world, as we sleep and rise day and night?

Thank you Fr. John for a soulful homily. You hit the gospel from a different angle and it helps me to find the truth and reality. Yes, many would favor to the saying “to see is to believe” but now i learn it’s high time to say “to believe is to see” especially when we look at our seemingly hopeless reality in our country. To believe is to be hopeful as christian who believes in the resurrection. Later, we can see the gradual changes in the negative reality of our country.

In this age of modern gadgetry, the race is usually on whoever will get the latest and most sophisticated cellphones with also the most advanced built-in cameras. Not just a single front cam but an equally state-of-the-art rear cam because admittedly for most people, these cameras are the most important components of every mobile phone. It is ironic because during the time when these phones were not yet invented people tend to shy away from any picture taking even with the use of the more popular stand-alone cameras such as Canon or Minolta. But not today because our lives are ruled by the images produced from these minute pieces of equipment. We do not believe anything without any pictures that will support it. We become “doubting Thomas” of the present that should see first Jesus Christ in the flesh before we believe that He had resurrected to eternal life. We forgot all about the reality that Christ works in mysterious ways and that we do not have to see everything He does to believe them. The development of more powerful systems of recording images is bound to continue for all of eternity, but God will never ever need one just to convince us that He exists. As long as we truly believe in Him, we will see Him in our hearts until the very end.

Thank you Fr. J lovely homily as always. I am guilty of pics every event is important pics to prove.
But you have opened my eyes. I believe even if I don’t see. I believe in God’s existence pics or no pics.God bless.

You are most welcome! It is He Who opens our eyes and hearts. 🙂 Praise Him.

my take on this Gospel today was on the same vein. however, i dwelt on the humble and insignificant ways in which God’s kingdom is ever present to us. and yet, we miss this presence so often now due to the artificiality, predominance and and negative impact of the “virtual reality” in social media. we are losing the beauty of a long loving look at each other, the thrill of discovering a raw feeling of joy or sorrow, the authenticity of laughter over a joke, the tender touch and caress of compassion and the wonders of humanity. in “virtual reality” we can communicate, and yet we do not connect. somehow, the very core of God’s incarnation in Jesus pushed aside as cold, impersonal, cryptic, shortcuts, misspelled words are passed rapidly, instantly, instinctively, loosely without thinking and more often than not, without feeling. and yes, this is not the kingdom of God in today’s parable.

So true, the increasingly lost art of ‘the long loving look’ at persons and at the world in all their mystery. Thank you for this reminder!

Thank you Fr. Johnny for this homily. Reading your reflection makes me understand more the parable.

Thank you for your words of encouragement! God bless!

Thank you Fr for the reminder. I guess it is all about faith. Pics or no Pics we have to develop a deeper relationship with God each day.

That’s exactly what matters the most: a personal relationship with the Lord that we need to nurture every day.

“To see is to believe”. But there’s more to life than what we see or touch. It is our faith that keeps us moving, to sleep and rise each day, to live life with a purpose. We have a choice to do what brings us closer to God. God, our Creator and Father, knows us too well. He knows our weaknesses & knows how forgetful we tend to be. That’s why we have reminders from Him. Sometimes, I wonder what kind of life will we be having if there was no Church, no Sunday mass, no Crucifix to remind us that there is a Jesus who came to die for us to save us from our sins.

Thank you for your sharing. To believe is also to see: Our faith opens our eyes precisely to invisible but invaluable realities. 🙂

I’m also guilty, Father Johnny! Since I am single, I am frequently on Facebook and Instagram, but I just take selfies when I think I look really pretty. I don’t really care about “LIKES.” It’s not about approval. It’s just about capturing the moments when I feel awesome. 🙂

I didn’t mean to condemn selfies and posting on social media (I am also guilty of it). My point many people forget that the more valuable things in life can’t be perceived or shared on the Internet. 🙂 Thanks for your comment. Keep taking selfies and posting them!

Love this homily. Thank you!

You’re welcome, Rose! Hope all is well with Ben and the family! Prayers.

Bless Fr. J more Lord for this reflection. I can feel you Jesus embrace me in my silent grief and anxieties. I can see you smile when I catch myself sinning and trying to change course. But I cannot take a picture of these to share. You want humility. You want me to share to others instead by imitating what you are doing in my everyday life.

The most beautiful and valuable things in life cannot and should not be captured in pictures. 🙂 Thank you for your sharing and prayer!

Thank you for this reflection. As always it is a welcome jolt – so keenly attuned to who and where we find ourselves these days!