In today’s Gospel our Lord criticizes the excesses and shortcomings of the Pharisees, but virtually tells us to practice what they preach. It’s surprising advice since it’s a subversion of the usual adage that we should “practice what we preach.” 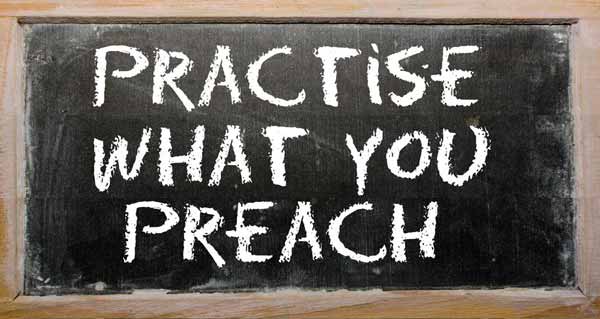 It’s also surprising because this is usually our excuse for not following authority–especially spiritual and moral leaders. Whenever what leaders say do not match what they do, we grab the opportunity to point this out and declare that they are not credible. After all, how can these preachers be credible if they fail to practice what they preach?

I’ve heard many of my friends declare that the reason why they’ve refused to go to church or why they’ve stopped believing in God is that for them, the Church no longer enjoys any credibility or respect, given recent exposes and scandals involving their authorities. So why listen to their words when their actions–so much more loudly–tell us otherwise?

Of course they have a point. Leaders and teachers–especially religious and moral leaders and teachers–are expected to practice–and model–what they exhort their followers to do.  As educationalist, Parker Palmer, puts it, “We teach who we are.” More than what we say, it’s our modelling of what we teach that makes the greatest impact on our students and followers. When we fail to do that, we lose credibility, and others will find it difficult to believe in us, not to say anything about doing what we ask them to do.

When there is a gap between someone’s preaching and practice, we ought to call it out, the way the Lord does in today’s Gospel. But the Lord reminds us that it would be foolish to toss the baby out with the bathwater. Just because the messenger is not credible doesn’t necessarily mean that the message is false. We can’t simply use the messenger’s fault as an excuse to dismiss the message. In other words, just as the Lord tells us to practice what the Pharisees preach, their hypocrisy notwithstanding, we are being challenged to believe what is true and to do what is right, regardless of whose lips they may issue from.

In speaking of the validity of the sacraments, St. Augustine used the Latin phrase “ex opere operato,” which literally means “from the work worked.” What he means is that the Church’s sacraments remain efficacious regardless of their minister’s attitude or state of grace simply because they derive their validity and power not from their ministers, who are human and flawed, but from the work of the Lord. Such is the power of God’s grace.

So next time you’re tempted to use–and blame–the shortcomings of others as an excuse to refuse to do what is right, remember that that’s exactly what it is: an excuse. Recall the message and wisdom of today’s Gospel: “Practice what they preach.”

10 replies on “PRACTICE WHAT THEY PREACH”

Thanks Fr. Johnny! New learnings in your homily. Regards.

In the homily last Sunday in Gesu, the Indian priest mentioned Indira Gandhi, “my life is the messenger”.

All the more reason to pray for our preachers’ daily conversion and personal sanctification.

We are all flawed, and yet i seem to forget this often in my everyday dealings.

God will always use flawed people as his instruments because he will have no one to use if he were as choosy as i am.

I need to tithe even if i do not like my parish priest or my council of servant leaders in community because i have to keep reminding myself that if i were in their shoes, i will surely fall short too.

The bigger picture brings me to the realization that the good and compassionate Lord has been incredibly merciful to each one of us — again & again, and there seems no excuse why i should not follow the words of the one who practised & modeled what he preached.

In the same realization, i find myself popping the question:
Fr J, is this what the Scriptures meant when it said we were also made in the likeness of God.

in the mess the world finds itself today….simplifying things…doing what is right because it it right….brightens the landscape! thank you Fr. Johnny!!!

You just validated my doubts. Thanks!

Powerful message. It is true that in the church are many sinners but the church itself is pure.

Thanks 🙂 and the priest at the mass I attended today reminded us that as the baptized, WE (each one us – you and I) are the priesthood; we are the church leadership called to preach/witness the beautiful example of Jesus wherever we are.