This homily is based on Matthew 17:1-9 for the Transfiguration of our Lord. 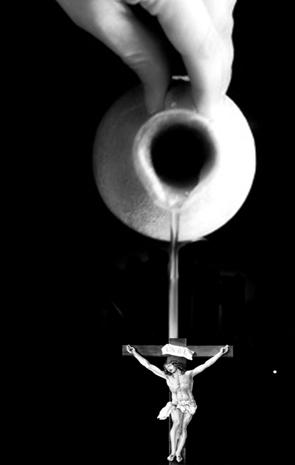 One moment Jesus’ face was bright like the sun, and his clothes white as light as he stood there between the two great prophets, Moses and Elijah. The next moment he was alone and it was “only Jesus.”

“Only Jesus” is a phrase I first encountered when I was preparing for the Jesuit novitiate over thirty years ago. When I received the letter of acceptance in December of 1986, I resigned from my job in Manila and flew to Cebu to spend the next few months in a retreat house getting ready for my new life. The Jesuit there suggested I read Archbishop Alban Goodier’s The Public Life of our Lord Jesus Christ. I remember pulling the dusty volume off the library shelf and thinking: “Now, this looks like a really old book and certainly smells like one!” But I read the book as instructed, and despite the author’s somewhat old-fashioned style, got into it.

I was particularly struck by the author’s use of “only Jesus.” It was precisely a reference to the story of the Transfiguration, when Peter and the disciples looked up and saw Jesus back to his ordinary earthly form.

Theologians and biblical scholars have a Greek word for Jesus’ ordinary earthly form: kenosis, which means “self-emptying.” St. Paul was the first to use that word to refer to Jesus. In his letter to the Philippians, the apostle wrote:

“Have this attitude in yourselves which was also in Christ Jesus, who, although he existed in the form of God, did not regard equality with God a thing to be grasped, but emptied himself, taking the form of a servant, and being made in the likeness of men. And being found in appearance as a man, he humbled himself by becoming obedient to the point of death, even death on a cross” (Phil. 2:5-8).

When God became human, He gathered His Infinite vastness to become “only Jesus.”

I wonder: Were the disciples disappointed that the divinity of Jesus went back into hiding? Or were they relieved to find the Jesus they knew?

Given all the things that are going wrong in the world today, I think we could all use a little display of the Lord’s divinity. To be honest, I’m beginning to wonder if this business of the kenosis, this subtle hidden divine presence–will it really do the work? Has the time come for some change in strategy?

So, how about a little Transfiguration, Lord? Just a minor one to shake us back into our senses and cow us back to some decency. We’ve all been feeling so self-sufficient and growing so blatantly self-entitled we no longer leave any room for You nor give enough regard for truth. Is it time for a little coming out party?

But we do believe that God is not only all-good, but also all wise. He wants what’s best for us and knows what’s best for us. If He prefers the way of kenosis, the subtle hidden and humble way, He must have a very good reason. And maybe today we are being asked to accept God’s way and even follow His lead by ourselves choosing the way of kenosis–even if we don’t understand completely.

How can you practice a little kenosis in your life?

I read your reflection on the gospel last Sunday and I was truly inspited and enlightened. Please include me in your mailing list. Thanks.

Will do. Thank you!

Good insight for reflections. When I empty myself, free myself from attachments, lose my feeling of self importance, self-entitlement and pride, will I be freed of worries? Will I lose my self worth? Will I be carefree with my life?

Worth considering, especially that I will be retiring soon.

Thank you for your reflection, Fr J. My mother told me to read this, and now I am interested in the way of kenosis. Please include me in your mailing list if ok with you.

This is a very inspiring and a little “wake up call” for me to be reminded of to do a little kenosis.
I would like to receive your daily reflections. Kindly include me in your list . God bless.

Self-emptying is ignoring or setting aside oneself . This means one becomes a nobody who, as Emily Dickinson warned, could be “banished” or perhaps, isolated. I think of contemplative nuns and hermits. Is this ” kenosis” __ gradually removing the self from who we are until we become converted away from self-gratification, self-indulgence, self-importance? This is like engaging oneself in a battle where the self must lose. How do we practice this in our daily life? It must be painful. The way to sainthood must be painful.

Hi! Thank you for your inspiring reflections.

May God’s grace be upon you always

Thank you! Will just include you in our email list 😉