This homily for Pentecost Sunday, based on Acts 2:1-11, was delivered at St. Agnes Church, San Francisco, and is my personal tribute to the late Fr. Jerry Martinson SJ (1942-2017).

Pentecost doesn’t always happen exactly the way it did that first time.

That first Pentecost, the disciples were waiting for the Holy Spirit as they huddled in that upper room, the same room where Jesus had promised to send them his Spirit. But nothing could have prepared them when the Spirit finally showed up in their midst. There was wind and fire and an explosion of languages. It must have been an extraordinary and unforgettable experience! That one event certainly shaped the rest of their lives and defined the history of the Church. Most Pentecost experiences, however, unfold in more quiet and ordinary ways even if they eventually turn out to be really quite extraordinary and unforgettable, as we later realize–sometimes years later.

Though I didn’t know it then, I had one such Pentecost experience when an American Jesuit missionary working in Taiwan showed up in our seminary over thirty years ago. My Provincial Superior had arranged for us to meet about a possible two-year assignment in the Jesuit media production house in Taipei, Kuangchi Program Service.

I had just directed “Immortal Diamond”, our class play on the poet Gerard Manley Hopkins. It was a one-man play, but we had cast our entire class because we couldn’t find a single seminarian who was willing to memorize all those poems in the play. After watching the play, my Provincial Superior decided to send me for media training–either he was impressed with my skill or was disturbed by the lack of it. 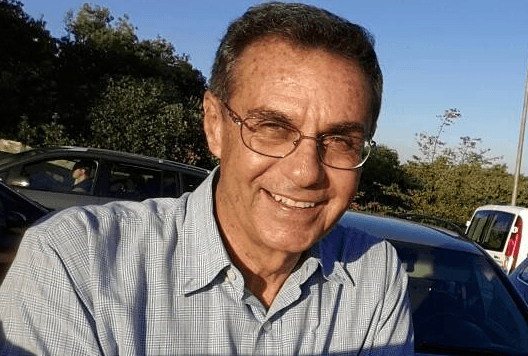 That’s how Fr. Jerry Martinson walked into my life. I still remember the evening he showed up at our community dinner. He was in Manila to conduct one of his media workshops. One of the first things that impressed me about him was that this Californian was as articulate in English as he was in Mandarin. 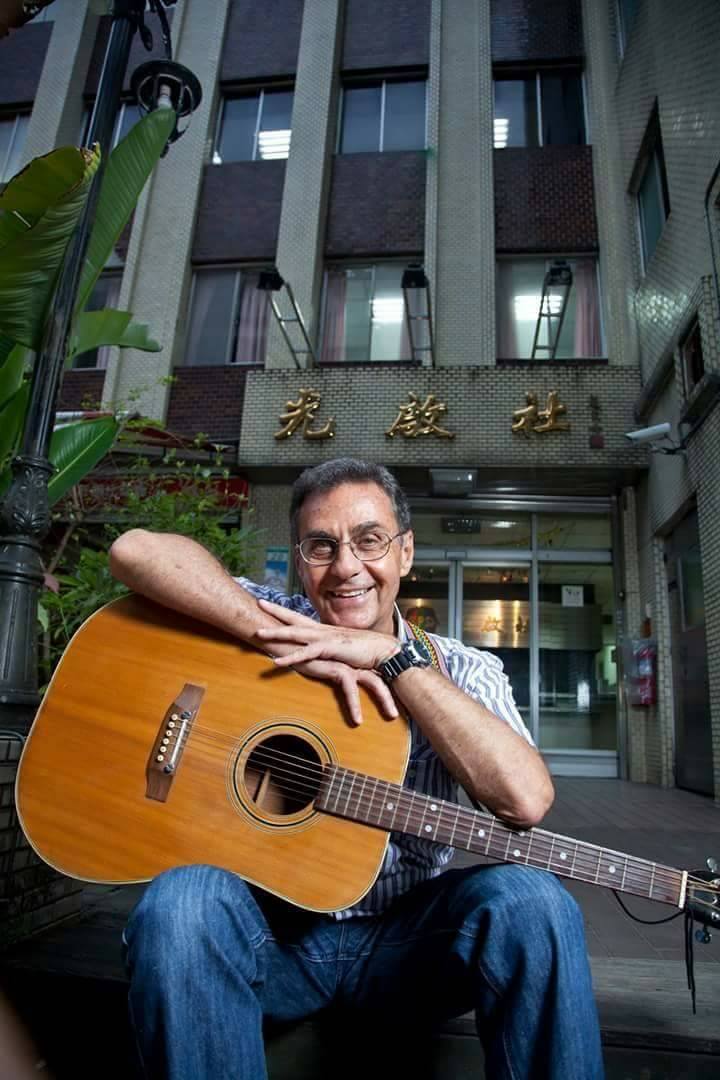 Dressed in jeans, he smiled easily and had a way of making you feel at home: He looked you straight in the eye through those tinted teardrop-shaped glasses of his and listened to you with what felt like earnestness and even fascination. As I learned eventually when I worked with him, it was his way with every person he met. He had a genuine interest in others and tried his best to give each one his full attention. 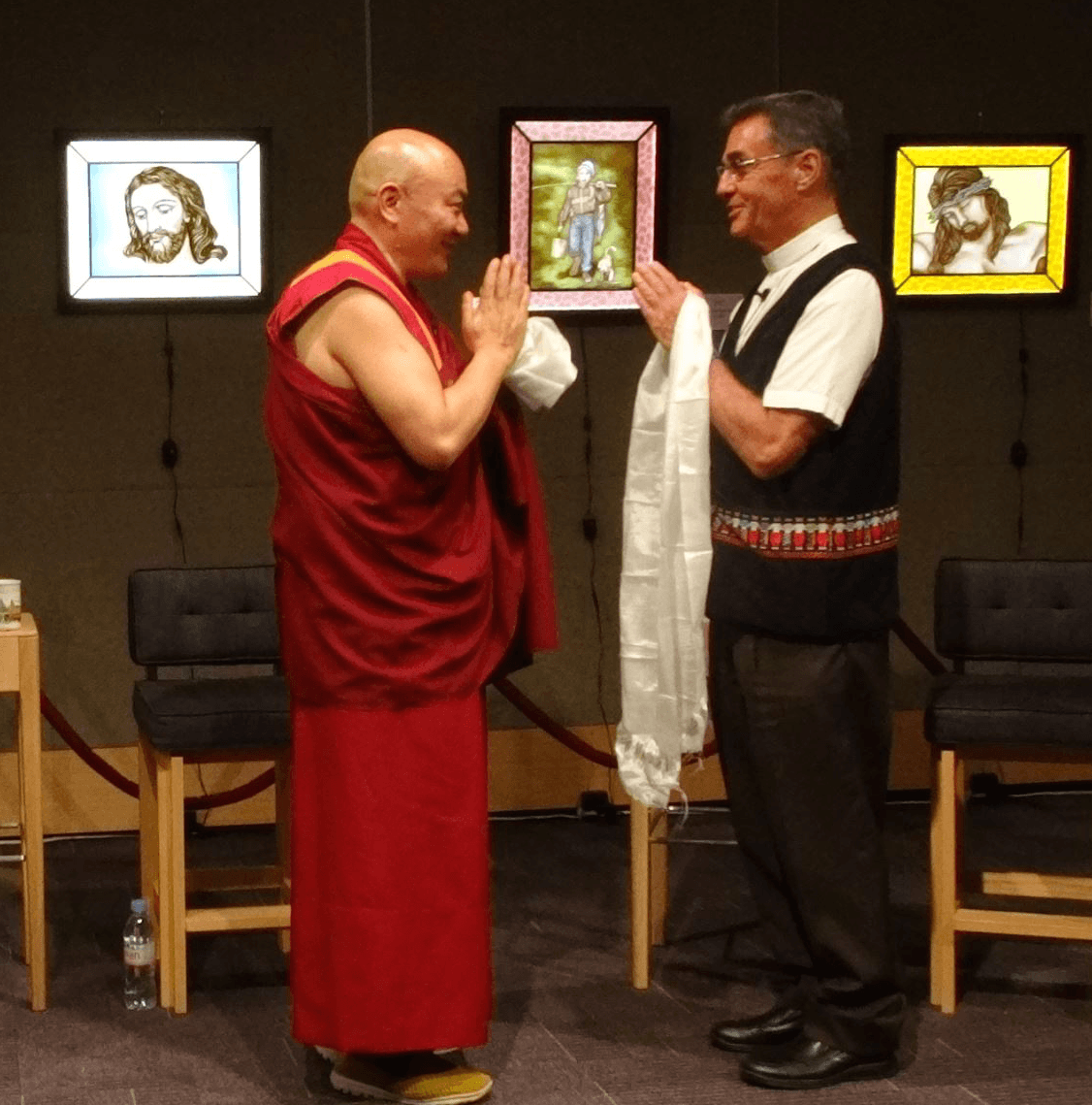 We spoke extensively about a project that he thought I might be interested in, a documentary about the Jesuit missionary, Francis Xavier. His enthusiasm was infectious. Even then, back in the 90s, he was completely convinced–and just as completely convincing–that media, with its broad reach, was one of the most effective ways for the Church to educate and evangelize the world.

I learned a lot working with Fr. Jerry those two years in Taipei–not just about media work, but also about leadership. He was the type of boss who basically left you alone. At first, it bewildered me, but it didn’t take me long to realize–and appreciate–that it was because he had this faith in people and he believed that his job was to empower those he trusted and basically get out of the way.

But he was far from an absentee boss: He painstakingly studied your work and was generous with honest and constructive feedback. He was a true mentor, always supportive and encouraging of the work I did even long after my stint with him in Taipei. He watched all my video productions, listened to my songs, and discussed them in great detail with me, often sounding much like a father beaming with pride over his son’s accomplishments.

I knew that because of his TV show, Fr. Jerry was a celebrity in Taiwan. What I didn’t know was that he was just as famous in China. Once we were on location shooting in a small village in Sancian Island, where Francis Xavier had died. As we were setting up, a group of children rushed towards us, crying out： “Jerry 叔叔！Jerry 叔叔！”  It was Mandarin for “Uncle Jerry”–his name in his long-running English Language program broadcast all over the Mainland.

Through the decades, Fr. Jerry has also become one of my dearest friends. Though we lived miles apart, whenever we met, we shared many stories and laughs together. Like a true friend, he also stood by me at my worst and darkest moments. But again, this was not a special thing he reserved for me. He had such a big heart that he welcomed everyone into his life. He made friends of every size, shape, and color: He was loved by Catholics and Buddhists alike, by his colleagues in Kuangchi, by the migrant construction workers in the streets of Taipei, and by a whole generation of Mainland and Taiwanese Chinese who learned English from their beloved Uncle Jerry. 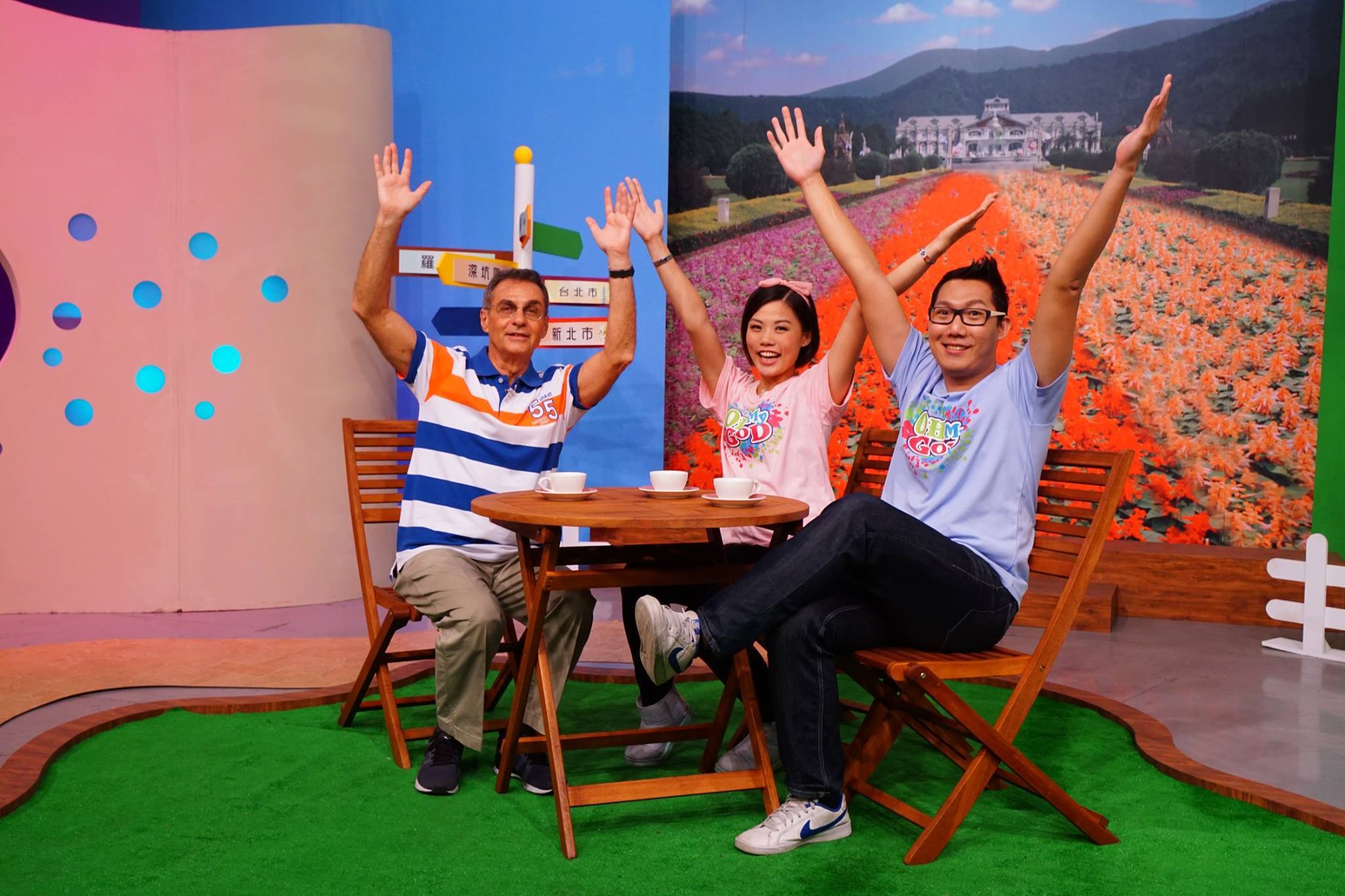 He was even friends with the disabled street vendors in the major intersections there near Kuangchi. Every time we stood there waiting to cross the street, they would crowd around him and look up at him beaming from their wheelchairs.

“丁神父!丁神父! (Fr. Jerry! Fr. Jerry!)” they called out to him with familiarity and unmistakable affection. Fr. Jerry would smile back at them and ask them about their lives. He made it a point to buy something from them even if he didn’t need that pack of tissue paper or had stopped eating candies a long time ago. It still astonishes me that Fr. Jerry actually knew all their names!

Fr. Jerry was as gentle as he was resilient and relentless. He once compared himself to a turtle that would bite something and hold on to it without ever letting go. He was that way with his principles and passions. No amount of misunderstanding or opposition would discourage him or cause him to give up. He went through some tough times in the apostolate: One of them seemed to me like a pretty long and dark tunnel with no light in sight–and there were times he sounded almost discouraged, but he kept on. He taught me that it was possible to be resilient, but at the same time, patient and humble amidst one’s troubles and even persecution.

I was in Taipei visiting last year when he suffered some kind of stroke. Except for its effect on his vision, it thankfully turned out to be nothing serious, but for a while, we were all worried for him. I was shocked that he had been so unfazed. He very simply told me then that he was ready to go anytime, and I could see that he truly meant it.

There was something vulnerable about Jerry. He wasn’t afraid to love people and to tell them he loved them. He didn’t fear being out there or being misinterpreted. He was almost naive that way.

A few days ago, I met up with a good friend, Fr. John Privett, and we talked about how eagerly we were looking forward to our get-together with Fr. Jerry towards the end of this month. But the other morning I woke up to the news that our friend had died. His body was found kneeling beside his bed. It must have been a cardiac arrest, and he must have died the night before.

Since I am miles away, his death feels so surreal. Were it not for the numerous news articles and tributes that have mushroomed all over social media, I probably would still not believe it. Above and beyond the far-from-processed grief that I feel over the loss of my friend is this deep lingering sense of gratitude for having received such an undeserved gift of his friendship, a presence that has made such a difference in my life. 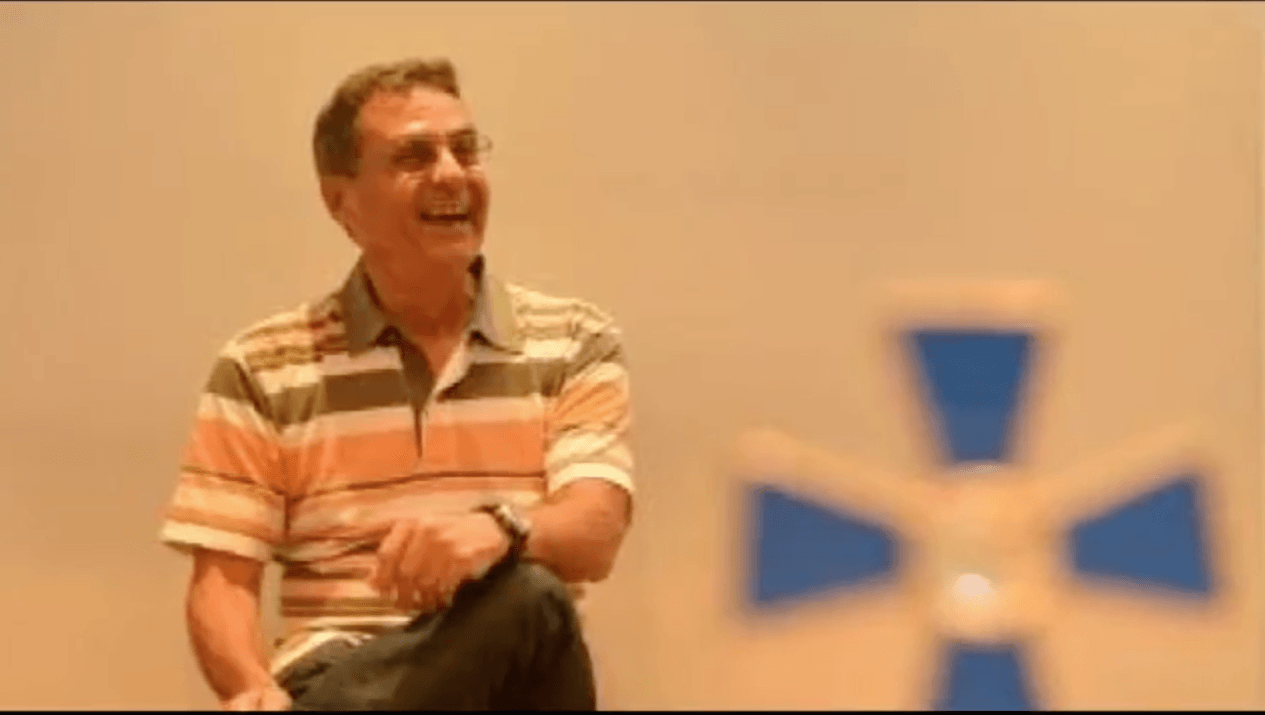 Sometimes it’s really only afterwards that we fully recognize the Pentecosts in our lives. This Pentecost experience featured no wind or fire or transcendence of language, but without either of us knowing it then, in his consistent, quiet, but no less extraordinary way, Fr. Jerry Martinson helped let the Spirit into my life: He taught me the courage to love gently and the passion to serve patiently. Most of all, he embodied for me that one thing that never fails to be the sure sign of the Spirit’s presence. It was starkly visible in Christ’s life, and it was clearly evident in his: A heart that recognized no boundaries and that spoke the one universal language of love, a heart as inclusive as God’s, its doors flung wide open to the world. 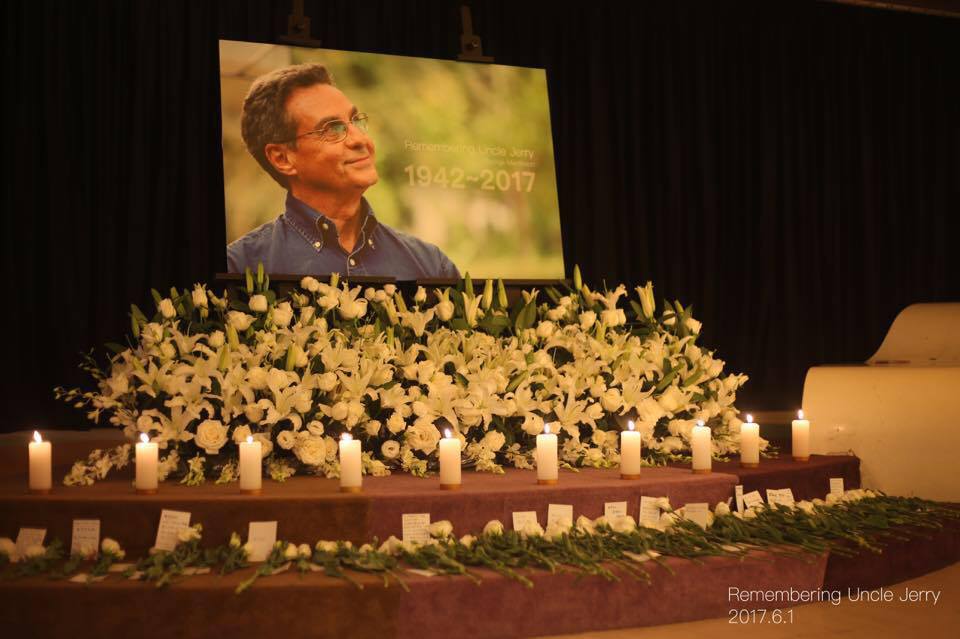 Today, Pentecost Sunday, we might want to thank the Lord for all the people like Fr. Jerry who have been agents of Pentecost in our lives, those who have helped share the Holy Spirit with us. We might also just want to ask ourselves: In what way can we also be agents of Pentecost for others? How can we in our own way usher in the Spirit into other people’s lives?

Thanks to all of Fr. Jerry’s friends for the images used here, especially Eddie Siebert SJ, Tones Tang, and Kuangchi Program Service.

12 replies on “ONE PENTECOST EXPERIENCE”

Hi, Fr. Johnny!
This is a beautiful and loving tribute to Fr. Jerry Martinson SJ.
I always pray for the Holy Spirit to “descend” upon me so that I’m mindful of the teachings of the Catholic Church and I can strive to be an agent of the Pentecost.
BTW, I’m glad that you mentioned St. Agnes Church. I checked it out and I found out that they have the Legion of Mary which I can join while I’m here in San Francisco. St. Ignatius where I go to has other advocacies.
Thank you for such an inspiring story!

Thank you for sharing Joseph, Father Jerry
Was very “SPECIAL”.

For Fr. Jerry
In memory of a life so Great and so beautiful touching so many people, he lived and Forever !!

Thank you, Fr. Johnny. May we all be blessed with agents of Pentecost… And be agents, ourselves.

Thank you for sharing this article. It is a beautiful tribute to a person I never knew but who has inspired me after I have read about him. It is a fitting thought to meditate on today, Pentecost Sunday. May we find our Pentecost moment and become aware of it.

Thank you for this wonderful homily. Fr. Jerry will like it.

Thank you, Fr. Johnny. This is such a day, a deep Pentecost day. Thank you, again and again!!!

What a beautiful and touching tribute, Fr. Johnny.

Thank you for your tribute to Uncle Jerry

Our pentecosts are probably our personal encounters with angels.

Thank you for sharing this homily. Fr. Jerry was exactly as you described, and so very keenly missed.

Your heart is broken and I am so sorry for your loss. Hugs and prayers, Fr. Johnny. May the Spirit of God that lived in Fr. Jerry remain in, and pour forth from, you❤️ Thank you for sharing your gratitude and your sadness.