This reflection is based on John 13:31-35 for the Fifth Easter of Sunday.

I begin with a confession: I had to read today’s Sunday Gospel several times before I managed to get into it. Don’t get me wrong. I do not disagree with the words of our Lord. On the contrary, these are, in fact, some of his most important–and at the time, revolutionary–teachings. 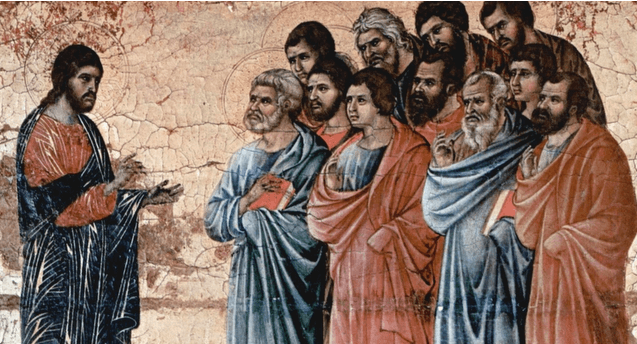 Now, no one in his right mind will have a quarrel with love. Love is good–especially the kind of love that our Lord is endorsing here: to love one another as he has loved us. Nowhere can we find a love more authentic or more selfless love in the Lord

My problem with the Gospel is that it’s true. And the problem with truth is that it’s usually not juicy. It’s usually boring; it doesn’t sell. Worse, when it is repeated often enough (as true statements tend to be precisely because they’re true), the truth begins to sound like a cliche, and no one pays any attention to cliches.

Back in 2005, American political satirist Stephen Colbert coined a word for something that’s better than truthfulness: “truthiness.” “Truthiness” refers to any statement or claim that is made without regard for evidence, facts, or logic. You just know it intuitively–“from the gut”–and you accept it just because it “feels right!” And the more you say it–and the louder and more confidently!–the more convincing it gets! Truthiness is sexier. 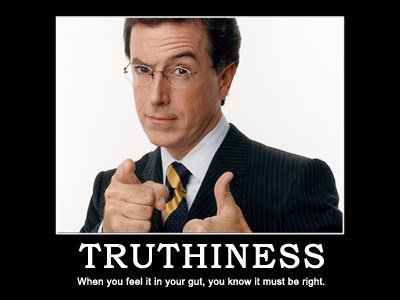 An exasperated Roman officer once famously asked his prisoner, “What is truth?” His prisoner–convicted for the crime of advocating love and speaking the truth–had tried to tell him, but the Roman officer fell prey to truthiness instead: As we know, Pilate heeded the claims of the Jewish leaders and the cries of the mob, and went on to crucify the truth

Truthiness is not an entirely novel phenomenon. It has simply been able to rear its ugly head more blatantly these days because of social media. Reading Facebook posts, tweets, and online comments this political season has never been more bewildering and frustrating–not just in the Philippines, but also in the United States.

So why be bewildered and appalled when audiences applaud and cheer political candidates who say things that are untrue, not to mention immoral? What’s the point of getting frustrated–or heartbroken–when crowds greet the most outrageous statements not with outrage, but with approval and boisterous laughter? Truthiness has a way of switching off our minds and reducing even the most educated among us into mobs.

The truth is, truthfulness doesn’t go viral. Truthiness does. And we know what viruses do.

Thank you heartily to remind us of impactful way don’t confuse truth and truthiness. Your homily invites us to reflect carefully on this dangerous drift towards truthiness. Truthiness is worse than a lie because we can dismantle the lie with supporting evidences. But truthiness needs no evidences, no logic. Its fraudulent claims are going through emotion, through the guts. As you point out emphatically, logic, facts and evidences are useless. Intelligence and critical thinking are out of touch, switched off.

After 20 centuries, the truth continues to face many difficulties to be understood. Often it is not even listened. Love and peace are choked with hatred and violence. The joy is drowned in cries and tears of suffering.
Europe is facing an immigration phenomenon for many decades. Currently it, is reaching a climax. Many politicians are exploiting the situation to gain or maintain their power and extensively employ truthiness. On the Net, lots of email amplify the phenomenon, sometimes of a way quite clever: some ring true and are said with conviction. Resentments are exacerbated and critical thinking is anesthetized. The breeding ground for hatred and violence is seeded.

It is urgent that we find again the truth of the gospel :love one another.
I pray that your voice is heard by the greatest number

Es verdad Fr J! Yesterday during lunch at the Jesuit Alumni Group in YVR, we were chatting abt politics and the absurdities that candidates say all for the sound bites. Truthiness appears to be effective in getting one to stand above the herd of candidates. Brings new meaning to campaign in poetry ….

Aha……….this is a very good point of reflection today until the day of Election!

Thanks for this reflection, Fr. Johnny! This is very affirming.

Thanks for this timely reminder, FrJ!

Truthfulness vs truthiness. In the context of presidential campaigns, it appears that thruthiness trumps truthfulness. The implications are scary. The magnitude of its impact in the long run is scary. What to do now?