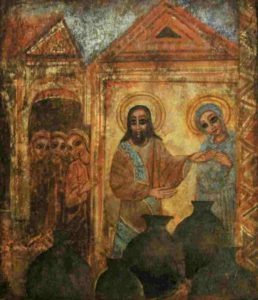 Based on John 2:1-11, this homily was delivered at St. Agnes Church, San Francisco.

The wedding at Cana is one of my favorite miracle stories in the Gospel. We are told that in changing water into wine for that wedding party, our Lord performed his very first miracle.

According to biblical scholars, the miracles of Jesus generally fall into two categories: those that involve healing (including exorcisms and the raising of the dead) and those that concern nature, such as the calming of the storm, the miraculous catch of fish, and the multiplication of loaves. This first miracle at Cana is clearly one of his so-called “nature miracles.” But for me, it isn’t just any other nature miracle. As far as I can tell, it is quite unique and unlike any other miracle of our Lord that we know of.

It is different from his other miracles in at least two ways. First of all, almost all of his miracles involve our Lord either doing or saying something. In bringing healing, Jesus almost always laid his hand on the sick–a particularly significant and compassionate gesture when he touched the lepers that society at the time avoided like a plague because they were believed precisely to be carriers of the plague. On certain occasions our Lord did more than just touch the sick: he even resorted to using water, spittle, and mud to cure the sick.

Jesus also almost always said something: “Take up your mat,” “Arise,” “Ephpheta! Be opened!” Many times he declared to the person: “Your faith has saved you.” Much to his foes’ horror, he famously told the paralytic, “Your sins are forgiven.” Even the storm, he spoke to: “Be still!”

As far as I can recall, there are only two reported miracles in which Jesus hardy said or did anything. One is the case of the woman with internal bleeding, who upon touching the hem of Jesus’ garment, was instantly healed without any word or gesture from Jesus. The other exception is this miracle at Cana.

Secondly, this miracle is the only nature miracle that Jesus did not himself initiate. Most of his healing miracles were usually solicited–requested either by the sick persons themselves or by their friends or relatives: The blind cries out for help, or the centurion and the Canaanite woman intercede for slave and daughter. Miracles involving nature, however, are usually initiated by Jesus himself–except this nature miracle for the wedding. The Lord certainly does not initiate it; he does not even notice the wine running out. It is Mary who brings this to his attention. Jesus, in facts, sounds really taken aback by his mother’s unexpected request and immediately turns it down, saying, “Woman, how does your concern affect me? My hour has not yet come.” In other words, “It’s not yet time for me to be performing miracles.” Or even more bluntly, “So what?”

But for me, what is most special about this account is that if we keep our eyes on Mary, the miracle at Cana teaches us about prayer. First of all, note how Mary approaches her son with her request. She tells him, “They have no more wine” instead of what we would probably say in the same situation: “Please help them. Please make some wine. And please make some wine now!”

In relaying her request to Jesus, Mary simply describes the situation; she does not prescribe what Jesus should do. Unlike us when we pray, Mary does not tell the Lord what to do. She has faith enough in Jesus–that he would know best how to deal with the situation.

More than that, Mary shows us exactly how great her faith is in the very way she responds to Jesus’ initial refusal. She does not do what most of us would normally do: She does not sulk in a corner, whining about how her prayer has not been answered. She does not throw a tantrum, swearing never to pray again. She does not even go back to her son to repeat her request the way Jesus, on another occasion, actually encourages us to: “Knock and the door will be opened.”

Instead, full of faith in her son, she quietly goes to the servers and tells them, “Do whatever he tells you.” This one simple line from the mother of Jesus beautifully sums up the message of the entire Gospel: Following Jesus precisely means “doing whatever he tells us!” More specifically, this one line teaches us what kind of disposition we ought to have after we have made our prayer: We surrender ourselves to the Lord’s will and obey what he asks us to do. Unconditionally, as indicated by Mary’s “whatever.”

At that wedding feast, Mary shows us her brand of prayer: A prayer in which she not only refrains from prescribing what Jesus should do, but she lets him prescribe what we must do in our lives.

Let’s think for a moment about the way we pray. First of all, how prescriptive are our prayers? Can we learn simply to bring our situation to the Lord’s attention–describing without prescribing–the way Mary has done at Cana? Instead of making our own decisions about what God should give us, can we, the next time we pray, put greater faith in God and let him decide what we need instead? Let the Lord, for a change, determine the outcome that he considers best for our situation.

Secondly, when the Lord does not immediately grant our prayers, can we, like Mary, continue to keep our faith in him and wait patiently for his response? Remember, Jesus said “No” to Mary when she first approached him, but she remained steadfast in her belief that Jesus would, in his own time, do what is right. Can we muster a similar faith in the Lord?

Finally, even in the absence of a response, can we surrender ourselves to whatever God’s Will may turn out to be and commit ourselves to accepting and obeying it? Are we, as Mary counseled the servers, willing to “do whatever he tells us?” Mary models for us the appropriate disposition after we say our prayers. Can our prayer lead us to a similar disposition of surrender and obedience?

In the wedding at Cana, Mary offers us a template for praying for our needs. And the best part? Mary shows us that if we allow our actions to be prescribed by Jesus, “doing whatever he tells us,” only then can we let ourselves be surprised by a God Who characteristically always saves the best for last.

16 replies on “THE MIRACLE THAT TEACHES PRAYER”

I would like very much to read and learn from “Tattoos on the Heart, The Power of Boundless Compassion”. Are they available here in Manila? Thank you

Mary knows JESUS knows best. Pray to Jesus about your concern and HE helps all he can without delay.In God ‘s time and pleasure, and love, for you and me. Thanks Fr. J , for your amazing homily, full of understanding and clarity.Best regards !

Thank you, Father! I needed to be reminded of this. God Bless!

Thank you Father J for a lovely homily of trust and obedience. Doing what our Blessed Mother had done is very difficult but trying to do it is not. Thank you for an eye opener of keeping that faith and following Jesus through obedience.

Thank you Fr J for teaching us how to pray – with openess to any possibility, with utmost humility,giving up control over the outcome.

I have never thought of this miracle in this way, Fr. J. Thank you for a new reflection on it.

I pray for the faith to constantly say “I will do whatever you tell me, Lord.”

The clearest, simplest tip/ teaching about how to pray that I’ve ever heard/read my entire Christian life. Spot on! Thanks Fr. Johnny.

It is also good to highlight that Mary’s prayer does not give our Lord a time frame. Most of my prayers sound so immediate and urgent, apart from being prescriptive, like God has to answer as soon as possible. When Mary said to the servers, “Do whatever he tells you,” she didn’t give any deadlines. She allowed him to decide and patiently waited. Our fast-paced lives makes it extremely hard to wait patiently.

Our pastor picked the exact same points to preach about. The underlying message for me then seems to be – .”Pay attention. This is important.” :). Thanks. While Mary is quite ‘silent’ in most of the gospels, her actions/way of life speak volumes.

Thank you, Fr. Johnny. Our family lives this truth every day of our lives. It will be almost 2 years since Lito’s stroke and we have been humbled by God’s constant presence through all blessings we have received.

Winnie, Lito’s recovery has been itself a miracle, judging from the way he looked that day I visited him in the hospital. I said goodbye to him, not knowing he would rise back from the dead. But then that’s typical of Lito. Please send him my best.

Blind Faith, Father? Isn’t this verging on the fatalistic? Or is this “faithful fatalism”? Praying by just giving Him the situation, and having Faith that He will find the best solution for us, because He knows what is best for us—isn’t this simply fatalistic?

I wouldn’t call it “fatalistic,” Richie. “Fatalism” means believing that things have already been predetermined and inevitable. It’s really just “faith”–believing that God knows what’s best and will do what’s best.

Always enlightening. I needed to read this. Thank you, Father!