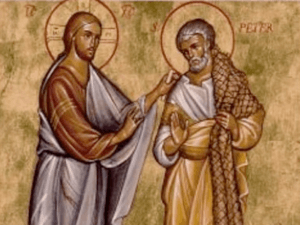 Our gospel story has what I consider two of the most poignant questions in the entire Bible. Our Lord has just talked about one of his most controversial teachings: That we need to eat his flesh and drink his blood. Indeed a “shocking” teaching, a saying that is “hard to accept.” As he watches his followers depart, one by one, he turns to the Twelve and asks, “Do you also want to leave?”

Simon Peter’s response on behalf of the Twelve is also a question: “To whom shall we go?”

It’s a rhetorical question, one that has an obvious answer: “No one and nowhere else.” And it’s a question that many of us may recognize, having asked the same question and hanged on to the same answer some time in our own lives.

Four years ago I felt deeply betrayed by some people that I had trusted, and as a result, experienced a period of frighteningly dark depression. It was one of the toughest times in my life. I felt terribly alone and helpless especially since like most people, I had to continue working and pretend that things were okay. Those closest to me did see beyond the facade and knew what was going on, but they clearly worried that I seemed to be falling apart. As these depressions go, I lost perspective at the time and believed that despite my friends, the whole world had abandoned me and walked away.

At such a time, I found myself frequently asking Peter’s question, “To whom shall I go?” And with certitude I knew its one and only answer: “No one and nowhere else. Only Jesus.”

It has been four years since that time. Thanks to God’s grace and the support of true friends, I survived that dangerous time. Recently, I came across a song called “Since I Saw You Last” that captured how I felt, especially the bewilderment at those just “stood and watched.” As it turns out, the singer/songwriter Gary Barlow went through a crisis of his own.

To this day, however, I have not forgotten how Peter’s question and the one answer to it saved my life. That one question sustained me during those darkest hours because it helped me seek the hidden but intimate presence of the Lord.

I have noticed, however, that since then, I have not asked that question as much–and as desperately–as I did when things felt like they were falling apart. I have always believed that the Lord is present in my life, but I have not sought his presence as much as I did when I felt my need for him. Today, as I reflect on the Gospel story, I have one simple realization: Peter’s question is not something to ask only when life feels like it’s falling apart. It is a question for every season of our life. Our Lord is always with us, always near though we do not always sense it. And we always need him though we do not always feel this need.

So here’s my resolution: I’m going to ask Peter’s question every single morning when I wake up. Through this question and through its answer, I hope to begin each day with an act of active seeking of the Lord in my life.

15 replies on “A QUESTION FOR ALL SEASONS”

Father,thank you for the reflection of the day.It reminded me of my past experiences.When my own friends betrayed me not knowing the whole truth of the situation but just condole you to hell.I seem to have lost in the abyss of being alone.Then the only recourse is to go before the Tabernacle and look for Jesus in Faith that He will listen to my heart in silence.And that’s it!Am happy and a whole person again.Thank you Father,God bless you!

Thank you for your sharing this week. In the low moments of life, that question is my prayer, my plea for help because I have no where else to turn. God bless you.

Thank you as always, Ming. Your experience confirms mine.

Lord of my childhood, Lord of my end,source of all my strength and inspiration – is my prayer now as I come
close to my end.

There is a song called “I Am” that your comment reminds me of. I’ll send you a link 🙂 Thank you, Mercy!

Dear Fr. J.,
It saddened me to know that somebody like YOU, a virtual Rock, can go through depression.
4-5 years ago, I went through a very difficult period in my career, something only a handful go through in this line of business or industry. Did I waver? Unfortunately, yes.
Then and now. I still waver. I am at 52 years, still a work in progress.
I wish you well.
Take care.

I think i’ts ok to waver, and in fact, it’s desirable to waver because only when we waver do we discover the true Rock, on whom alone we must build our lives. 🙂

Thank you so much for your candor, Fr. J. Your homilies are such a gift because you share so much of yourself. I think such openness, and honest grappling with who we are at any given moment and finally, self-compassion, are what ultimately cracks our hearts open so we can see and then embrace who truly resides within – that fountain of all holiness. the Spirit of all life. My prayer for you every day will be for a unwavering, unchanging, steady and consistent answer to your daily question. God love you, my friend. I do.

Thank you, Irene! So well said. Thank you especially for the prayers 🙂

thanks for the reminder Fr Johnny. I needed this today.

How does one actively seek the Lord?

For me, seeking begins with desire, and our desire can be expressed by Peter’s question. That’s one powerful way. 🙂

Amen, Fr. J. Only Jesus can sustain us in this life. He is the answer to all our needs.

Indeed. It’s an important truth we take for granted.