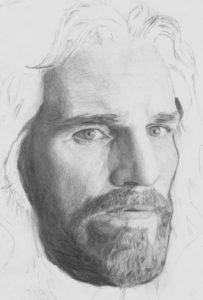 I remember the trip quite vividly. We were driving down the express way, and I noticed my sister sleeping near the window. My younger brother, who was seated in the passenger seat with his nanny, had tied the usual knots in his handkerchief, waving it around like a puppet. As I sat between my father and mother, my mother touched the back of my neck and finding a rosary there, she asked me why I was wearing one.

Before I could answer, I heard screaming, and the car veered sharply to the left, throwing me off my seat, and we must have veered again to the right before my brain shut down.

When I regained consciousness, even if I couldn’t see anything, I instinctively groped for a way out, which turned out to be the car window. Later, I would learn that our car tried to avoid two girls who had run across the highway. The car turned-turtle twice before finally landing on its roof amidst the rice fields off the highway. As I crawled out onto the rice field, I saw a row of people watching from the road, and someone called out to me, “Hey kid, how many dead?”

As it turned out, not one. One by one we all painstakingly but miraculously crawled out of that smashed car. Not a drop of blood. And from the looks of it, no broken bone either. At worst, we were sore and stunned. My sister cried, my mother’s arms wrapped around her. The spectators, having satisfied their curiosity, began to disperse. From among them, a man, who must have been in his early thirties, emerged and spoke to my father.

“You should have yourselves checked,” he said. “Get into my truck. I’ll take you to a doctor.” No one had the strength to protest. He led us into his vehicle, which turned out to be a small delivery truck. My parents sat with him in the front seat, while the rest of us climbed into the back, seated among the boxes of canned goods. We drove to the nearest town, and after asking around, the man found us a doctor’s clinic. My mother thanked him after we got off his truck, but he didn’t want to leave and actually waited as the doctor gave each of us an examination. The doctor said we should all get xrays, but we seemed fine except for some minor bumps and bruises.

The man filed us all back into his truck, and drove us all the way back to Manila. It was evening by the time we got to EDSA, where the last thing he did was hail us a cab. When my father offered him money, he politely waved it away, smiling. My mother thanked him for spending that entire day helping us.

By this time, we were all exhausted, and I must have fallen asleep as we drove away. The last thing I heard was my father telling my mom: “What a kind stranger! And to think I forgot to ask for his name.”

Decades later, a priest was reading the words of the coming Sunday’s gospel, and all that talk about loving one another as the Lord loves us made him think unexpectedly of that stranger.

It was then he knew. The man’s name was Jesus.

I am new in Pins of Light, I was invited by a friend. It looks like a good start (reading/praying thru inputs and by the replies.
Thank you, Annie. Thank You Po, God

Welcome to our virtual community! Will include you in our list so that you get updates, if you wish.

Nice story, Fr. J. I’m sure that angel of a man helped you because the heavens above knew the wonderful impact you would someday have on people you would come across.

Thanks for sharing Johnny. Something similar happened to me today. It was nerve racking.. I bumped a motorcycle rider who just suddenly appeared in front of me. It’s a good thing I was able to brake hard and he was able to control his bike so that he would not swerve. It could have been worse,
him falling down from his bike. In the heat of the moment while we were raising our voices at each other, 2 metro manila traffic police appeared to appease us and find a solution.

I said I’d pay for the damage. The other police said to follow him as he knew a bike shop that can estimate the damage to the bike. So we went there. They estimated the damage and it’s a good thing I had just enough money,as in exactly the amount, to pay for it. I apologized to the rider. He was still in shock. I asked if he wanted a drink of water and he said yes. So I bought him a bottle. I told him not to drive yet. Sit down first and calm down.
So we were fine. Those 2 policemen were like angels that came from nowhere. They were God sent.
God is so good.

I’m glad you were unhurt, Anna. Thanks for your sharing. Those cops indeed were angels, but it sounds like you extended kindness to the motorcycle driver as well. God bless!

What a touching life experience…a meeting with the Lord Himself through a stranger! Thank you for this powerful testimony!

Thank you Fr.J for your inspiring story I was so moved I lost my husband in a car accident 22 years ago. Someone had stopped his car and helped him and my younger son brought them to the hospital but my husband was DOA fortunately my son survived. This man also went to our house to informed my eldest son of the accident. There are still good people around Like what Jesus has commanded us to love one another. God bless please continue to inspire us with your homily. To God be the glory for your talent Fr J.

Thank you, Lucy, and I’m sorry for your loss. but indeed there are kindhearted strangers in our midst.

Thanks for sharing these
thoughts on how to live the gospel of Jesus christ. This story is reminding us that we have to be good disciples of christ in words and deeds. May God gives us the grace to overcome our weaknesses and strengthen our faith in Christ so that we can express our love of God by loving our neighbors.

Thank you as well. That is really our call — to express God’s love through our love of our neighbors. Well said.

Fr. J, God had a reason to save you all. You lived to
tell the World- HE is JESUS our Savior! Happy Mother’s
Day- MARY our MOTHER

God is good, and Mary our Mother spreads her mantle of protection over us.

Father, it was very clear from your story that the man who went out of his way to help your family in your time of need was heaven sent to remind everyone about God’s message of opening our hearts even to strangers as manifestation of our love for Him. As a token of appreciation we should return the favor by continuing His work of helping others and spreading His words to our fellowmen so that they will come to understand and accept without doubt the true calling of being Jesus Christ’s believers.

He was truly heaven-sent. May we all be the same to one another.

Very touching and uplifting story. thanks for sharing.

You’re most welcome! Thank you!

Thank you for the inspiring story, Fr. Johnny. I really believe in miracles. Your story is testament that there is still goodness in our chaotic world. Jesus is truly our saviour. You’re truly blessed and im grateful for inspiring us to keep our faith. God bless.

Yes indeed, so easy to forget the goodness that hides in this world. But thank God for the graced moments when we catch glimpses of it–and of God.

What a beautiful story Fr Johnny.
Thanks for sharing.

That was a miracle! Your love encounter with Jesus! You are truly blessed, Father.

So true! God bless you too!

Lovely! No one could have told that story with such flair and purpose. Thanks Fr J. You’ve started my (Mother’s) day right!

Thank you, Lillian, for the usual kind words! Hope all is well! 🙂

Thank you for sharing Jesus and yourself.

You’re welcome, and thank you too!

I love this story of yours, Fr. Go. I remember what my mom used to tell me that the kindness of strangers can be considered as a miracle by itself already.

Thanks Fr. J for sharing your experience. Love is the greatest gift God has given to us and yet we tend to take this for granted. Sometimes I wonder what it takes for us to love one another, the way Christ has loved us. Our selfishness have made us deaf & blind to His commandment. But I believe that God has His ways of allowing each one the chance to meet Jesus right there in one’s heart.

Thank you for your sharing. Yes, the crucial thing is keeping our eyes peeled for those “chance encounters” with the Lord. Sometimes it takes a while to recognize His Presence, as in my case.

God moves in mysterious ways…some people may be neglecting something-to help unconditionally..instead of helping,they just waited for the worst of others.How wonderful life is when we always pray and ask for God’s guidance and mercy…May we not neglect that we are here for a mission..to live out the Gospel.

These experiences are powerful reminders of our mission, as you shared. Thank you!

Thank you Father J for your story. For teaching us the meaning of loving one another.

We are all students of love 🙂

so inspiring and touching